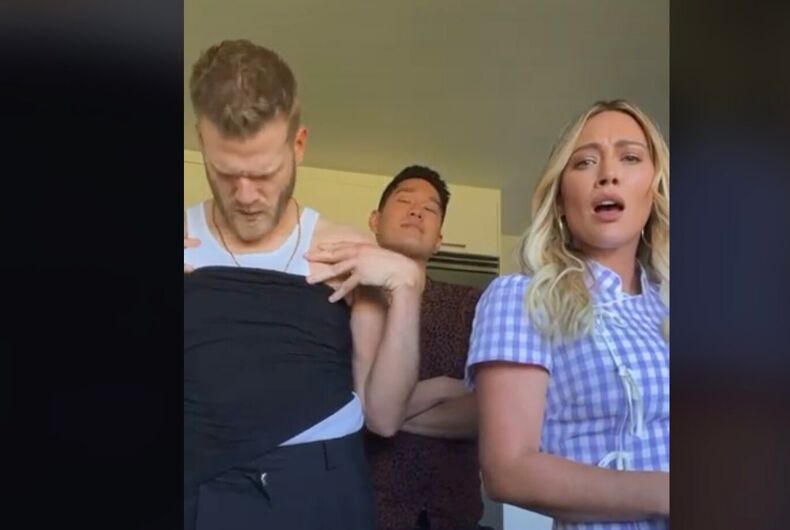 Hilary Duff has recreated her iconic 2008 “That’s So Gay” PSA against homophobia and bullying.

In a recent TikTok video posted by Duff, the actress lip syncs to her own voice from the original commercial alongside Pentatonix singer Scott Hoying and his fiancé Mark Manio.

Hoying and Manio are acting as the two teenage girls from the original sketch. In it, they are trying on clothing when one of them says that a top the other is trying on is “so gay.”

As in the original PSA, Duff approaches, horrified.

“You know, you really shouldn’t say that,” she mouths.

“Say what?” Hoying mouths back.

“Say that something’s gay when you mean it’s bad.” Duff responds. “It’s insulting. What if every time something was bad, everybody said, ugh that’s so girl wearing a skirt as a top?”

In the caption of the remake, Duff wrote that Hoying and Manio “tying the shirt on as a skirt/top made me say yes.” She added, “also 14 years later -still holds up.”

In the comments, fans were so excited to see Duff calling back to this moment, and some expressed how meaningful it was to them at the time.

“i literally stopped saying that cause of this commercial,” one follower wrote.

“this commercial meant so much to me,” said another.

Another added, “What this meant to some of us. Always a queen Hilary.”

After the add came out over a decade ago, Duff spoke to CNN about her decision to appear in the PSA.

“We are just not kind enough to each other, and there is no reason why kids should go to school and it not be a safe place for them or they should not be accepted,” Duff said.

“I have plenty of gay friends that I love to death,” she added, “and would never want to say or do anything to hurt their feelings, but I think it’s a term we’ve just gotten used to saying…it’s important to just be more conscientious of what you say and know that it could really be hurting someone.”