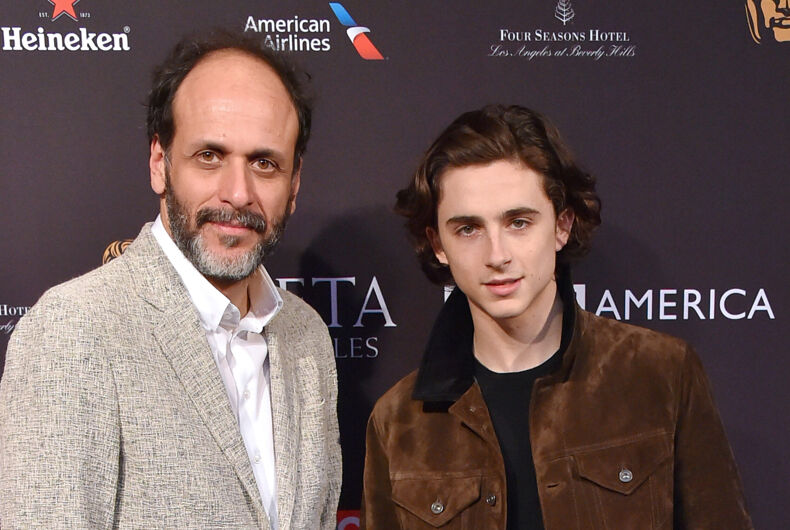 During an interview at the Telluride Film Festival, the director revealed his latest rough concept for a potential follow-up to Call Me by Your Name.

Presumably, that would free Guadagnino up to work with Chalamet without having to include Call Me by Your Name’s troubled co-lead, Armie Hammer.

Talk of a sequel started almost as soon as the 2017 film was released. The André Aciman novel on which it is based features scenes of its central characters Elio (Chalamet) and Oliver (Hammer) meeting again twice in the decades after their summer fling. Guadagnino has spoken repeatedly about his desire to revisit the characters at different points in their lives, and about how he might flesh out those brief glimpses of them from the novel.

“In my opinion, Call Me can be the first chapter of the chronicles of the life of these people that we met in this movie,” he told The Hollywood Reporter in 2018. “If the first one is a story of coming of age and becoming a young man, maybe the next chapter will be, what is the position of the young man in the world, what does he want — and what is left a few years later of such an emotional punch that made him who he is?”

Aciman himself published a sequel to the novel, Find Me, in 2019, laying yet more foundation for a potential second film.

In various interviews over the years, Hammer and Chalamet had also expressed interest in returning to the characters. But allegations of abuse and cannibalistic sexual fantasies against Hammer in 2021 seemed to cast doubt on whether a Call Me by Your Name sequel could move forward without him.

Now, it seems, Guadagnino is mulling the idea of a sequel focusing exclusively on Chalamet’s character.

In the meantime, it’s hard to ignore the parallels between Guadagnino’s new film and Hammer’s personal scandals. Bones and All, which is based on Camille DeAngelis’s 2015 novel, stars Chalamet and Taylor Russell as two cannibal teens on the run in the 1980s.

Life
Call Me By Your Name, Luca Guadagnino

Shangela will be the first drag queen to compete on the U.S. “Dancing with the Stars”