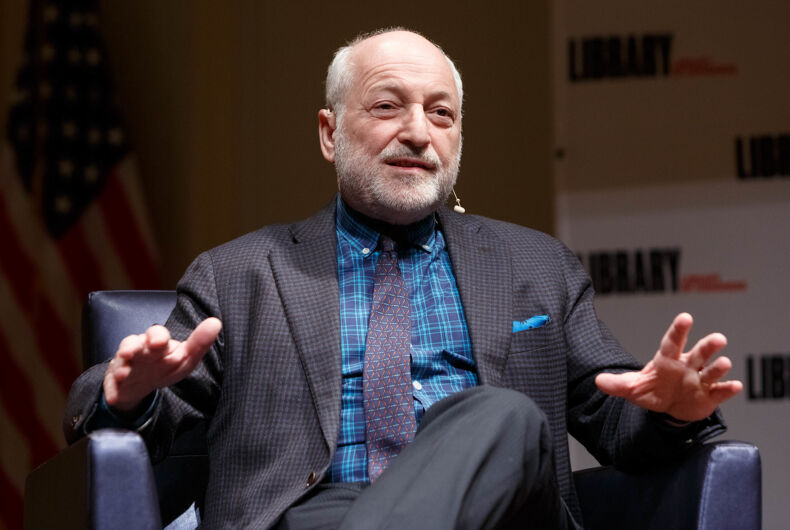 Yesterday, out musician Lil Nas X released his latest single “MONTERO (Call Me By Your Name)”, which he has teased for several months through tweets, previews, and even a Super Bowl commercial.

It shares the title of the 2007 book by André Aciman, which led to the subsequent 2017 feature film of the same name starring Armie Hammer and Timothée Chalamet, depicting a romantic relationship between a teenage boy and his father’s young assistant. Although the song is not a direct inspiration of the book or the film, Aciman said that it is “gratifying” and “humbling” that Lil Nas X used the phrase.

Related: Lil Nas X shuts down a conservative site that didn’t get his gay joke

LGBTQ publication them. had reached out to Aciman after Lil Nas X first teased the song and the title in July of 2020. He emailed them back a statement, celebrating the Grammy-winning entertainer’s use of the phrase.

“If Call Me by Your Name had even the slightest influence on Lil Nas X’s music, then that’s beyond anything I could have ever imagined or hoped for,” he told the publication.

He added, “It’s gratifying, it’s humbling, and it reminds me that how others relate to and interpret this novel is often more meaningful than the actual words on the page.”

Aciman, who is not out, added that he only had recently learned who Lil Nas X was through one of his three sons.

“I called to ask him about this song that I kept hearing at the gym, I wanted to download it on Spotify,” Aciman explained. “After a series of bad imitations and descriptions, he was finally able to figure out what I was talking about: ‘Old Town Road.’”

Aciman is currently a professor at the Graduate Center of City University of New York. He has penned several other books, including a sequel to Call Me by Your Name entitled Find Me in 2019. He has received a Lambda Literary Award and previously taught at New York University, Princeton University, and Wesleyan University.

The film Call Me by Your Name was nominated for several Oscars – including Best Actor and Best Picture – and it took home the award for Best Adapted Screenplay in 2018.

Out screenwriter James Ivory, who is the oldest person to win an Oscar at age 89, thanked the author of the novel on which the film is based. He also thanked “my life’s partners, who are gone.”

Lil Nas X, born as Montero Lamar Hill, soared to fame two years ago with his record-breaking hit “Old Town Road,” and he came out as gay at the height of his popularity. Following the EP 7 in 2019, this is expected to be one of the songs on his upcoming debut album, which Columbia Records has announced is entitled MONTERO.

Lil Nas X teased the song several times online, and a sample of it was even included in an ad for Logitech starring him that aired during Super Bowl LV this February.

The phrase “Call Me By Your Name” is repeated throughout the lyrics to the song. Lil Nas X confirmed in an interview last month on the “Zach Sang Show” that his song has nothing to do with the movie, but Aciman is happy about it nonetheless.

The video for “MONTERO (Call Me By Your Name)” shows Nas in drag, shirtless, in a bedazzled muscular bodysuit, in drag, and wearing knee-high stiletto boots and underwear while giving the devil a lap dance. As of publication, it has 9.7 million views in under 48 hours following its premiere.

The 21-year-old hip hop sensation took a moment to speak to how much his life has changed now that he’s an adult.

“Dear 14-year-old Montero,” he opens in a letter to his younger self posted online, “I wrote a song with our name in it. It’s about a guy I met last summer.”

“You see, this is very scary for me, people will be angry, they will say I’m pushing an agenda. But the truth is, I am. The agenda to make people stay the fuck out of other people’s lives and stop dictating who they should be.”

.@aaciman said it was “gratifying” and “humbling” that Grammy-winning rapper @LilNasX would write a song that shared a name with his work 💘 https://t.co/46ojGUxtix

The crossover we weren't expecting but sure needed #CallMeByYourName https://t.co/KzXnd6ExkL

.@aaciman made the phrase “Call Me By Your Name” heart-rendering, but @LilNasX made it sacred. #MONTERO #CMBYN

QAnon Rep claims the U.S. Capitol is evil because they “wipe out male and female” there