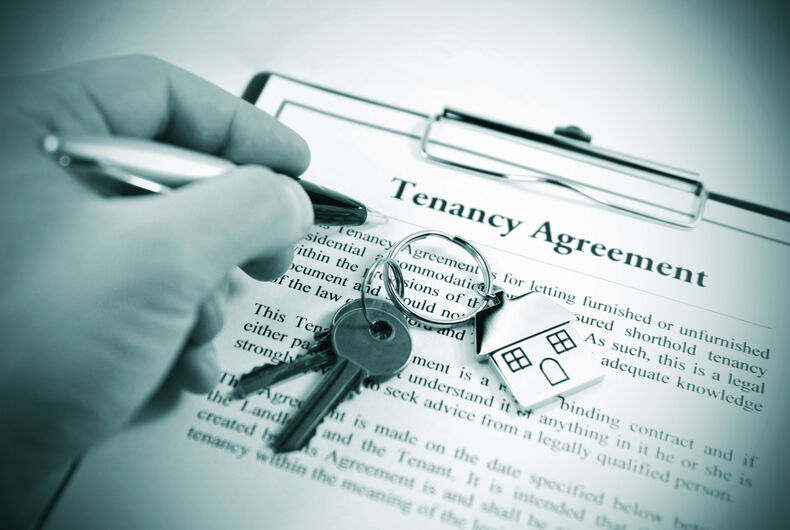 The Department of Justice (DOJ) has filed a lawsuit against the managers of a Milwaukee, Wisconsin rental property for allegedly harassing and threatening a gay, disabled tenant. The allegations amount to violations of the Fair Housing Act, a 1988 federal anti-discrimination law, which the Biden administration expanded to include a ban on anti-LGBTQ housing discrimination.

The suit says that from 2019 to 2020, Dennis Parker, manager of a rental property, repeatedly harassed a gay man — identified in court documents as “John Doe” — with “unwelcome and unwanted sexual comments that were egregious, offensive, and violent,” the DOJ wrote.

Doe — who suffers from bipolar disorder, post-traumatic stress disorder (PTSD), depression, and anxiety — contacted Parker looking for a unit at the apartment complex that he managed. During the conversation, Doe allegedly mentioned that he was gay and had disabilities.

In response to the texts, Doe said he told Parker that he had previously been sexually assaulted and that some of Parker’s statements had triggered his PTSD.

However, Parker allegedly continued to send harassing texts such as, “Why u being such a straight up punk bitch? Are your feelings hurt or our your nipples sore. Grow a set p***y”; “[G]uess what you’re a punk bitch sick homosexual and I don’t require your friendship. F**k you bitch ass f****t”; “Your a f*g a abomination against Jesus f**k you”; and “Go f**k yourself shove a hamster up your a**.”

Parker also allegedly sent texts mocking the tenant over his disability-related work limitations and use of Social Security Disability Insurance.

Parker allegedly texted the man, “U weak and ret**ded. Look how u shake and act around people you are a loser a user tired of caring your [weight] . Get off your lazy ass and work quit scamming off the government”; “Little f*g parade scam off the government you can work you‘re no better than a … f**king lazy POS and judge others”; and “F**k you [you’re] a weak bitch and a coward that’s why you have so many problems in life.”

On December 22, 2019, the tenant told the Milwaukee Police Department about Parker’s harassment. When police officers visited Parker’s apartment, Parker allegedly refused to answer the door and yelled, “Go f**k yourself” to the officer. The officer slipped a $195 disorderly conduct citation under Parker’s apartment door.

The following month, Parker allegedly sent the tenant over 28 text messages to Doe in retaliation for his “little stunt calling the police.” Parker said that the property owner had given him permission to evict Doe and to either destroy, discard, or give his belongings to someone else.

Parker also blamed a bedbug infestation on Doe’s sexual orientation. Though Parker later said that he would he assist with the infestation, he allegedly never did, the DOJ wrote.

On January 26, 2020, the tenant allegedly banged on and broke the tenant’s storm windows, yelling, “God hates queers and queers go to hell.”

On February 26, Parker allegedly texted Doe violent messages that referred to him as a “jew,” and one message with an image of a lynching victim with Doe’s name written on them. Parker’s accompanying text message allegedly said, “He voted Democratic, good ol days.”

The following day, Parker allegedly sent 15 harassing text messages to Doe, referring to him as a “fa***t” and “ret**ded.” Parker then started telling Doe that he should find a new place to live.

On June 23, Doe sent a message to the property owner stating that Parker “has been harassing [him] for a long time,” and that Parker had recently “punched [him] hard in the Balls.”

“[If Parker] touches me again in anyway or continues to harass me, I will call the cops, press charges and file a restraining order,” Doe allegedly wrote. “This harassment needs to end NOW!”

Doe moved out on July 1. On September 23, he filed a discrimination complaint with the U.S. Department of Housing and Urban Development (HUD). After an investigation of his complaint, HUD determined that Doe had likely been discriminated against, in violation of the Fair Housing Act.

The DOJ’s suit said that the property owner “knew or should have known of Parker’s discriminatory conduct, had the authority to take preventative and corrective action, and failed to take reasonable preventative or corrective measures.”

In addition to discriminating against Doe and sexually harassing him on the basis of sex and disability, the DOJ alleges that the property owner has taken no steps to compensate Doe for his experience or to ensure that similar harassment never occurs in the future.

“No tenant should have to choose between having a stable residence or enduring sexual harassment from their landlord or property manager,” U.S Attorney Richard G. Frohling for the Eastern District of Wisconsin said in a DOJ statement.

“The U.S. Attorney’s Office is committed to working with our federal, state, local, Tribal, and community partners to combat all forms of sexual harassment in housing and to seeking justice for those impacted by this type of egregious conduct,” Frohling added.