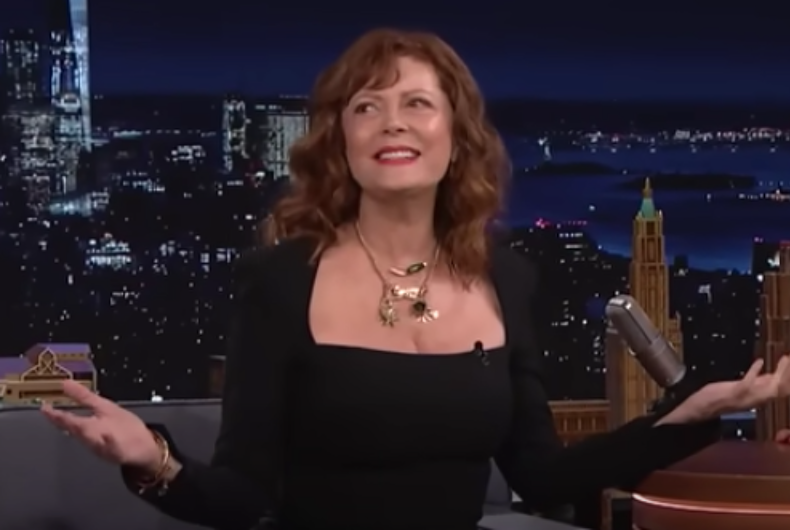 The actress did actually come out as sexually fluid in 2017. However, her recent announcement was more of a joke about liking both cats and dogs.

Near the start of the interview, Fallon called Sarandon “a friend of our show” and mentioned that she had brought her dogs on a previous interview with him.

“Yeah,” Sarandon said sadly. “My little creatures all passed away. I can’t talk about it because I still get upset. It was about a year ago.”

Fallon laughed and clarified, “Wait, so, you mean you like dogs and cats?”

The audience chuckled as she replied, “I’m fluid. I’m very fluid where animals are concerned.” She revealed she had owned cats before her dogs.

She now owns a cat named Ida, which Sarandon called “serious,” “non-social,” a “bitch,” and “the saddest looking cat ever.” Fallon showed a picture of Ida. The cat seemed to have a slight frown while looking upward. The audience laughed as she mentioned that she unsuccessfully got two other cats to help cheer up Ida — it didn’t work. Now she has three cats in her tiny apartment, she said, and she’s considering whether getting a dog would help the cats get along better.

Earlier in the interview, Sarandon mentioned that she has been busy making the upcoming DC superhero film Blue Beetle. All of it’s lead actors are of Latinx and Mexican origin, she said, and the film will have Spanish dialogue. She said she “had a fabulous time” playing a “white military-industrial complex” villain in the film, “because there’s nothing better than being bad.”

Her queer fans rejoiced over her “I’m bi” announcement on Twitter. One tweeted, “wait how am i just now finding out that susan sarandon is bisexual is that true are you sure what’s going on.”

But she actually came out in 2017.  At the time, an interviewer asked Sarandon, “Are you open regarding your sexuality?”

She answered, “My sexual orientation is up for grabs.” Her response was widely interpreted as an admission of bisexuality or at least some sexual fluidity.

Sarandon is an HIV- and social rights activist who played bisexual naif Janet Weiss in the very queer and campy 1975 sci-fi musical The Rocky Horror Picture Show, had a lesbian sex scene with co-star Catherine Deneuve in the 1983 vampire flick The Hunger, and spoke as herself in the 1995 LGBTQ film documentary The Celluloid Closet (inspired by gay activist Vito Russo’s book of the same name).

Shangela will be the first drag queen to compete on the U.S. “Dancing with the Stars”