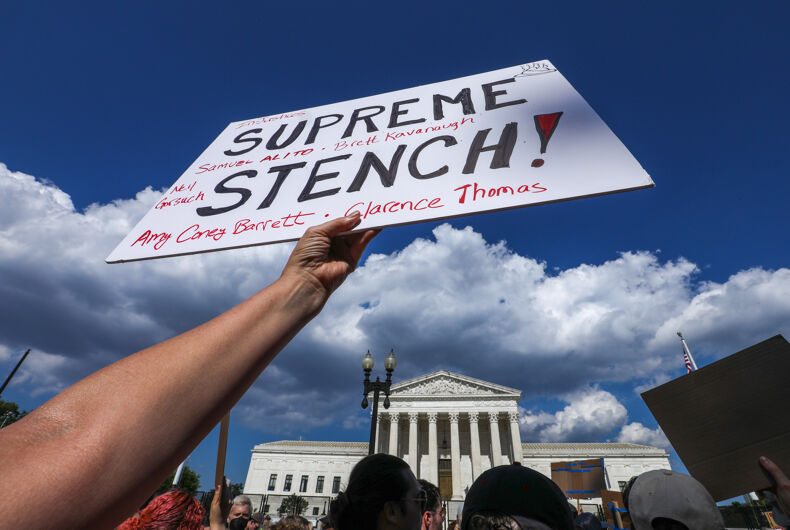 WASHINGTON, USA - JUNE 25: Pro-life-abortion and abortion rights demonstrators rally in front of the US Supreme Court in Washington, DC, on June 25, 2022, a day after the Supreme Court released a decision on Dobbs v Jackson Women's Health Organization, striking down the right to abortion. (Photo by Yasin Ozturk/Anadolu Agency via Getty Images)Photo: Anadolu Agency via Getty Images

For years, Republicans have been pushing policies that are wildly popular with their base and wildly unpopular with the majority of Americans. Privatizing Social Security, cutting taxes for the wealthy, overturning Obamacare–all of these ideas have long been standard beliefs for Republican candidates. Even though most voters disagree with those policies, the party has paid little price for taking those positions.

But then came the Supreme Court decision on abortion.

Everything about the GOP’s Supreme Court strategy had been leading up to that moment. Sen. Mitch McConnell singlehandedly blocked any consideration of then-President Obama appointing a replacement for Antonin Scalia in hopes of stalling until a Republican entered office. In outsourcing the choice of Court nominees to the anti-LGBTQ Federalist Society, Donald Trump ensured that his three choices were ideologically guaranteed to overturn nearly fifty years of a woman’s right to choose.

In that sense, the decision wasn’t a surprise. What has been a surprise is how much the Court’s ban on abortion has ruined the Republicans’ midterm election strategy.

Despite all its other unpopular stands, the GOP was coming into this year’s midterm elections well positioned to take control of both the Senate and the House, making President Biden’s life hell for the next two years. Instead, Republican candidates are scrambling frantically to figure out how to deal with the fury that the Court decision has unleashed across a wide swath of the political spectrum.

The wake-up call came from, of all places, Kansas. There, an effort to amend the state constitution to ban abortion went down in flames. The vote wasn’t even close: 59% to 41%. Turnout was high, and it was immediately clear that even in a deeply red state like Kansas, Republicans had overplayed their hand on abortion.

What Republicans are discovering is that it’s easy to breathe fire and brimstone when there are no real-world consequences. But having to answer questions about why a 10-year-old rape victim should be forced to carry a baby to full term or why women carrying unviable fetuses can’t have procedures that could save their own lives is proving to be a very uncomfortable situation for the GOP.

Candidates and office holders are responding in a variety of ways. Some are embracing their inner weasel. After telling primary voters that he wanted a law that would make a fetus a person, Arizona Senate Candidate Blake Masters suddenly scrubbed his website and tried to downplay his past rhetoric. Masters’ website used to describe him as “100% pro-life” but doesn’t anymore. The federal personhood law for a fetus that Masters was pushing is gone too.

Now Masters is saying that a law allowing abortions up to 15 weeks is “reasonable.” This is from a man who has called abortion “genocide.”

Masters is hardly alone. Even the most hard-core anti-abortion candidates are trying to soften their image. Pennsylvania gubernatorial candidate Doug Mastriano now says that the “people of Pennsylvania” will decide the state’s abortion policy. (This is from a man who wanted to overturn the people’s will in the 2020 election.) In Minnesota, Scott Jensen, a doctor running as the GOP governor candidate, had said he wanted to ban abortion as governor. Now, he’s trying to tell people he favors some exceptions.

Of course, there are those candidates who are far more honest and stick to their far-right guns. Tudor Dixon, the GOP’s nominee for governor in Michigan, still insists that there be no exceptions for rape or incest.

You would think that after teeing up the victory that they’ve been waiting decades for, the GOP would have had a plan in place on how to reassure voters that it’s not all that bad (even though it is). Their failure to do even the most preliminary preparation is a stunning failure of strategy.

The result is that the Democrats now stand a good chance of holding onto the Senate and even increasing their margin there. Much to the chagrin of the GOP and the surprise of everyone else, the chances of the Democrats even holding onto the House are growing. Republicans hadn’t counted on abortion being the issue motivating voters this election cycle.