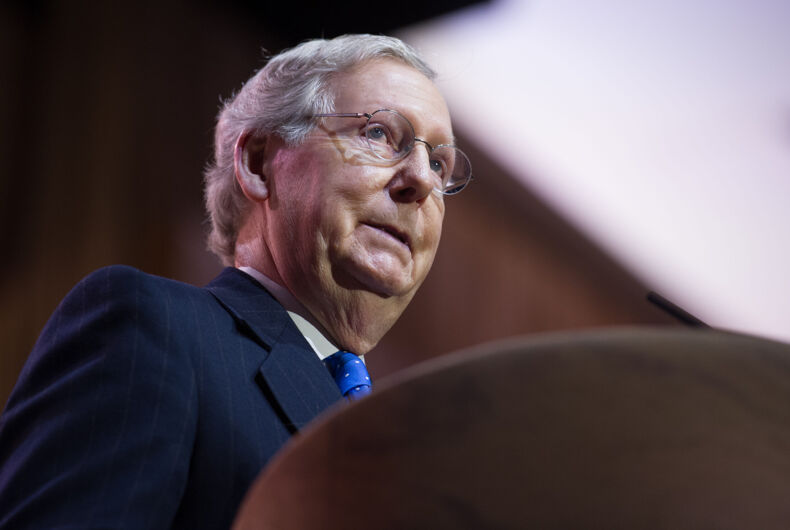 Senate Minority Leader Mitch McConnell (R-KY) may not be former President Donald Trump’s biggest fan, but he’s hardly his wife’s stalwart defender either. In fact, he’s so lackadaisical about defending his wife’s honor that he practically makes Sen. Ted Cruz (R-TX) look like a gentleman.

After Trump insulted McConnell’s wife, former Transportation Secretary Elaine Chao, the powerful senator declined to return fire. In fact, he declined to comment on the matter and dismissed it entirely.

Chao served in Trump’s Cabinet. Her father, who was born in China, started a giant shipping company based in New York that her sister now runs. She resigned her position shortly after the Jan 6 insurrection by Trump supporters at the Capitol before she could be called on to invoke the 25th Amendment that would have allowed Cabinet members and the Vice President to remove Trump from office.

McConnell earned Trump’s ire when he downplayed the GOP’s chances of taking the majority in the Senate. The leader admitted in front of a group of supporters that the crop of far-right Trump acolytes currently running for office were dragging the Party’s chances.

“There’s probably a greater likelihood the House flips than the Senate,” he told the group. “Senate races are just different. They’re state-wide. Candidate quality has a lot to do with the outcome.”

Trump furiously took to his social media platform to denounce McConnell, calling the long-term Senator a “broken down hack politician” and describing Chao as “crazy.”

“Why do Republicans senators allow a broken down hack politician, Mitch McConnell, to openly disparage hard working Republican candidates for the United States Senate. This is such an affront to honor and to leadership. he should spend more time (and money!) helping them get elected, and less time helping his crazy wife and family get rich on China!”

Later, when asked if he had a comment about Trump’s insults, McConnell was clear about his willingness to engage.

Cruz finished second to Trump in a bitter primary battle and balked at previous promises to endorse the eventual Republican presidential nominee. He said Trump made things too personal when he called him “Lyin’ Ted,” insulted Cruz’s wife, Heidi, and repeated discredited accusations linking Cruz’s Cuban-born father to the John F. Kennedy assassination.

“This man is a pathological liar. He doesn’t know the difference between truth and lies. He lies practically every word that comes out of his mouth,” Cruz said of Trump hours before ending his presidential campaign.

“Donald will betray his supporters on every issue,” the Texas senator added, while calling Trump “utterly amoral,” “a narcissist,” “a bully,” and “a serial philanderer,” among other things.

Cruz went on to become one of Trump’s most ardent supporters, backing the former president on almost every issue and defending Trump’s most vicious smears and bullying behavior. He attempted to circumvent the Constitution to keep Trump in power.

Chao made more of a statement than either of the two senators – and she never needed a man to defend her.

Elaine Chao was a part of Trump's Cabinet for 1,441 days where she was in charge of over a dozen different federal agencies. If Trump accuses her of corruption, then it's a testament to his own incompetence that he appointed her at all, and it should be thrown in his face often.

Senate Minority Leader Mitch McConnell asked if he has any reaction to Trump calling his wife Elaine Chao “crazy”:

How an anti-gay church accidentally raised money for LGBTQ rights