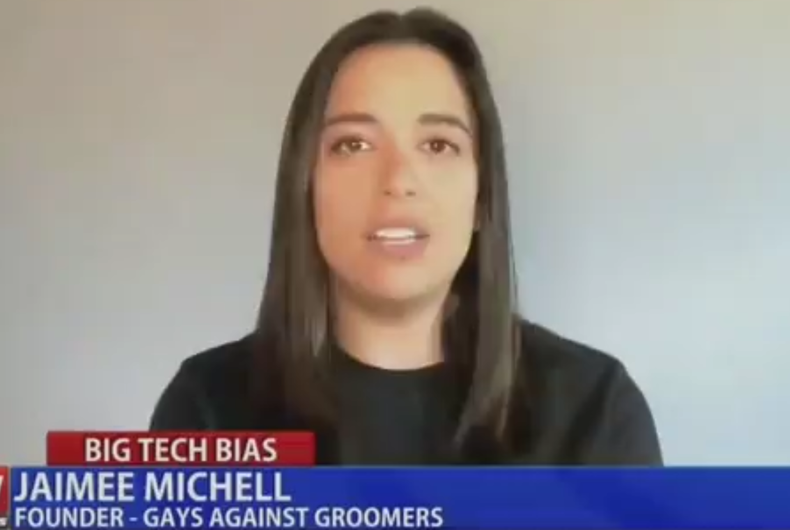 “What’s happening now would make you know, I think Josef Mengele, I believe that was his name, you know, the Nazi doctor,” Michell said on the One America News Network (OANN), a far-right channel. “He, you know, this puts him to shame. They are basically using an entire generation of children as lab rats for this sick ideology.”

Mengele, who was called the “Angel of Death,” is notorious for his deadly experiments on Auschwitz prisoners during World War II. Even other Nazi doctors were horrified by his apathy towards human life and sadism.

The Nazis were opposed to LGBTQ identities and, in fact, destroyed Magnus Hirschfeld’s Institute of Sexology – which did pioneering work on understanding LGBTQ identities, including transgender people – years before the onset of World War II. So it’s bizarre that Michell would say that her opponents are like Nazis when this issue puts them on the opposite side.

She said that she has to oppose transgender equality so that straight people will leave gay people alone.

“I think that a lot of people are starting to look unfavorable unfavorably on us, just regular gay people in the community, you know, that are just gay and live our lives normally and want to be left alone and leave everyone else alone,” she said. “these people do not represent us. They’re a very small minority, but they’re so vocal and loud because they have the backing of woke media and woke corporations, and even the government now, like the Biden administration, with Rachel Levine coming out saying gender-affirming care, is like, has to be done in order to save children’s lives.”

Gender-affirming care for transgender people has been shown to be life-saving in actual medical studies. One study found that having access to puberty blockers as a teen significantly reduced lifelong suicide risk.

Michell also complained that conservatives are less accepted than gay people because people say mean things to her on Instagram.

“I am personally conservative,” she said. “I’ve actually had an online presence as the gay who’s straight on Instagram primarily for over six years. And we always like to joke – me and others that are, you know, right-wing gays – saying, like, we’ve come out twice now and actually coming out as conservative is much harder than coming out as gay now. It’s almost like looking down upon if you don’t come out as gay now.”

Mengele was known as the "angel of death" at Auschwitz. Michell appears to know nothing of shame. pic.twitter.com/2sT51BUQpV

OANN has been dropped by cable services this past year after their contracts expired. Verizon was the last remaining large carrier to drop OANN this past July, and now the channel is no longer available on cable.

A gay couple was chased out of a park for kissing. The community rallied with a kiss-a-thon.