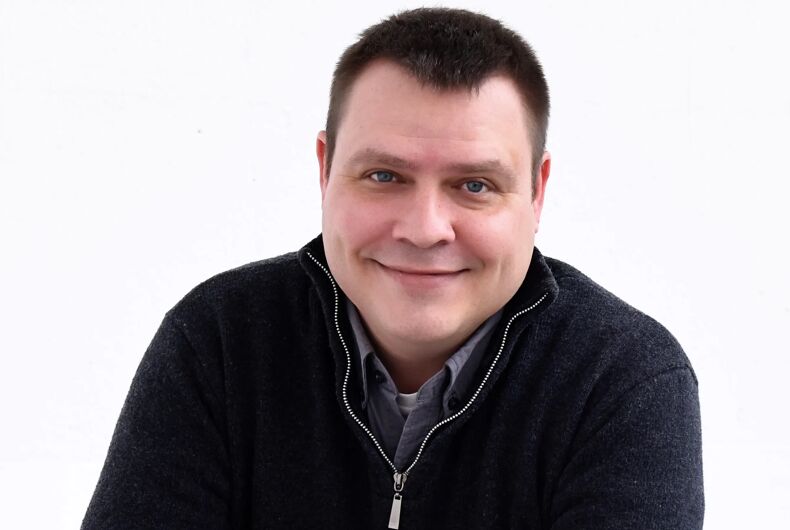 When a seat on the Urbandale School Board in Iowa opened unexpectedly last March, gay elementary school teacher Daniel Gutmann was in.

The 45-year-old special education teacher had a crack at the same seat in the Des Moines suburb in the fall, when he placed fourth in a race for three open seats. This time, the election would be a clear choice between Gutmann – an openly gay elementary school teacher, a member of the teacher’s union, a Democrat, and an outspoken progressive – and his Republican opponent – a social conservative backed by “parental rights” advocates.

Gutmann knew he’d be a magnet for controversy in a state where Donald Trump won by 10 points.

“We absolutely need to confront this kind of, you know, division and the negativity and the falsehoods and hate,” Gutmann told politics news site Iowa Starting Line. “But we just have to do it in a way that, you know, we’d be comfortable with our grandmother listening to the conversation, or one of our favorite schoolteachers.”

Gutmann was up against Republican Steve Avis, an IRS CPA who had the support of high-profile Iowa Republicans in the state including state Sen. Brad Zaun (R). In March, Zaun co-sponsored Senate Study Bill 2198, a proposal to enable parents to sue schools or educators who distribute books or materials that parents deem obscene.

While that bill would die in committee, in the same legislative session Iowa passed a ban on transgender women and girls from competing in school sports, signed into law by Republican Gov. Kim Reynolds in March.

Gutmann said his strategy was to reach voters by emphasizing his commitment to issues he felt people agreed on: children should be safe in schools, public money should support schools that are open to everyone, and library materials shouldn’t be censored.

That caught the attention of Moms for Liberty, the far-right group that claims to advocate for parents’ rights in schools while freaking out about students “encouraging bisexuality” in schools and LGBTQ suicide hotlines working to prevent suicide.

As his campaign released policies, he noticed more people in his comment section on Facebook asking questions about unrelated issues, or trying to provoke arguments.

“It became apparent that they were going to use some of those tactics of trolling people’s social media to try and distract them and really divide folks by rehashing all the divisions that happened during the pandemic,” he said.

Gutmann’s posts about preventing school shootings, for instance, drew commenters asking whether he supports masks in schools, or whether children should be able to access pornography.

“They kind of have these contrived-like discussions,” Gutmann said. While “most folks in Urbandale were concerned with, you know, kids possibly getting gunned down in schools, these folks were just playing these nonsensical games to distract people from what we can do.”

Campaign staffer Alissa Heasley was tasked with monitoring Gutmann’s social media. She said the goal was to answer questions as clearly as possible and then move the discussion forward.

“Sometimes you’re walking into a conversation knowing ‘I’m probably not going to get very far with this person, but I’m going to share some factual information that hopefully will spark somebody’s interest,’” she said.

“One of the most important things, I think, for us to do – which we can’t do 100%, I didn’t do 100% – but tried to put emotion aside, keep the information that we are giving factual, stick to the things that we know,” she continued.

“It’s hard to put emotion aside when at the end of the day, you’re a human and you’re talking to other humans and you’re worried about other humans,” said Heasley.

It wasn’t easy for the campaign when things got personal. A private Facebook group moderated by a Moms for Liberty member shared multiple posts about Gutmann’s family, in one instance using photos from a wedding to question the candidate’s position on mask mandates.

While Gutmann said he’s OK with being in the public eye, critics using his family to score political points crosses the line. It’s a “crowd that really wants to intimidate people, wants people to remain divided and destructive.”

Despite the incendiary baiting, Gutmann was steadfast in his approach.

“A lot of what I draw on is my experience in de-escalating, deflecting situations like that,” he said. “In my classroom, I’m not going to use loaded language. I’m going to be very clear about where my boundaries are, very clear around what my expectations are for the people that I am interacting with, and conduct myself with integrity.”

Voters in the school district, asserted Gutmann, “are ready to really move on and find agreement and consensus.”

It turned out that the school teacher was right. Gutmann won his special election in July by 12 points.

“We’ve been so focused on our divisions over the last couple of years that we kind of forget that, you know, these are the same folks we sit next to at our kids’ ballgames or their band concerts,” he said.

“If a poster boy for everything [right-wing groups] hate about teaching and teachers and marginalized communities can win by 12 points – if I can do that, then I got to think that other folks can tap into that same energy and that same desire to move on,” Gutmann said.

We made “clear that we were the adults,” he added. “We were the ones focused on solving the issues facing our kids and staff.”

Gutmann fills the remainder of retiring school board member Judy Downs’ term, which runs through November 2023.