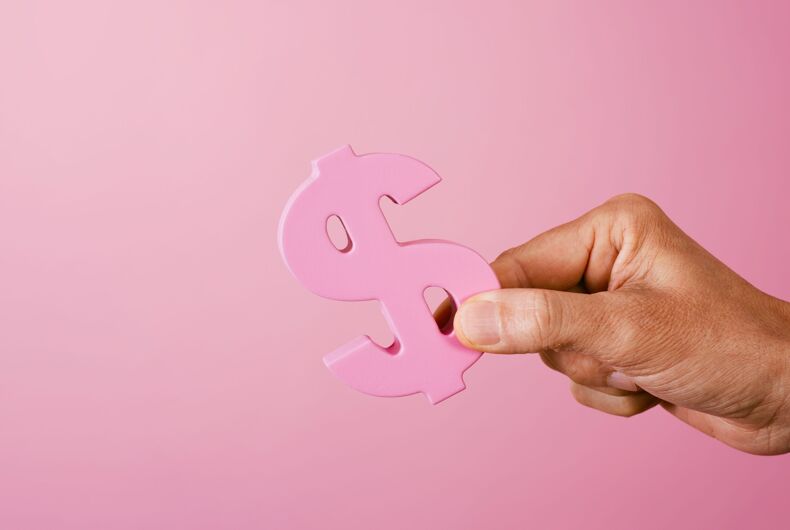 Come June of each year, corporations roll out the pink carpet for the LGBTQ community, emblazoning their boring corporate logos with rainbows and tweeting vaguely inspirational messages about pride.

But in recent years, more discerning consumers have voiced their concerns about the effects of “pinkwashing” on the community and how seemingly well-meaning businesses and institutions end up doing more harm than good.

But what is pinkwashing? What does it look like? And what does it really do to the LGBTQ community? Read on to find out.

Pinkwashing: Definition And Origin Of The Term

Pinkwashing refers to how corporations and institutions appropriate the LGBTQ movement and culture to promote a product, corporation, or entity. This is most prominently seen during Pride Month when brands and organizations step forward “in support” of the LGBTQ community with rainbow-fied logos and queer-themed promos.

The term “pinkwashing” first came into use in 2002, when breast cancer awareness advocates began noticing brands that would market products with the pink ribbon – a symbol of the need for awareness and funding for breast cancer research. These brands were called out for co-opting the campaign while continuing to manufacture products that contained cancer-causing ingredients.

At face value, it may seem commendable for influential brands to vocalize their support of the LGBTQ community. But critics urge consumers to be more discerning about a brand’s actual values and labor practices before praising and supporting a brand for having a seemingly gay-friendly or pro-LGBTQ reputation.

Many brands that engage in pinkwashing are guilty of using the LGBTQ community to boost their PR and incur capital from “pink money”, all while maintaining unjust labor practices, discriminatory hiring processes, and supporting anti-LGBTQ organizations. In this sense, pinkwashing is a diversionary tactic that entities use as a smokescreen to hide the less progressive or even downright discriminatory facets of their organization.

Finally, the Institute for Policy Studies calls rainbow capitalism – the commodification of queer culture and the LGBTQ movement – a “slap in the face” and a “way for corporations to reap the benefits of queer allyship without spearheading initiatives or promoting tangible policies that will have a positive impact on the community”.

These entities can co-opt the LGBTQ movement and even make money off of LGBTQ consumers and their allies, all while the community continues to suffer from discrimination, high rates of mental illness, homelessness, unemployment, and poverty. Pinkwashing and rainbow capitalism can make it appear like LGBTQ advocacy starts and ends at slapping a rainbow on your products and sponsoring a float at pride – when in reality, it’s the bare minimum.

A post shared by PAPA artist AKA Betty Rose (@the_papa_artist)

Pinkwashing can appear in various ways. Let’s take a look at some recent pinkwashing examples:

One of the most egregious examples of pinkwashing is the Israeli government’s attempt at rebranding the country as a kind of “gay mecca”. In 2010, the Tel Aviv tourism board funded a $90 million campaign to sell the city as an “international gay vacation destination”. Today, Tel Aviv Pride is often touted as the “largest Pride event in Asia”. This, despite growing concerns of human rights violations against Palestinians, along with a government constituted of conservative and religious politicians who, according to Tel Aviv University law professor Aeyal Gross, “remain fiercely homophobic”.

The US Marines’ Rainbow Bullets

In June 2022, the United States Marines’ Twitter account tweeted a photo of a soldier’s helmet with six rainbow-colored bullets strapped to the side. The caption reads, “Throughout June, the USMC takes #Pride in recognizing and honoring the contributions of our LGBTQ service members. We remain committed to fostering an environment free from discrimination, and defend the values of treating all equally, with dignity and respect.”

But the US military has had a long history of homophobic and transphobic policies, including the “Don’t Ask, Don’t Tell” ban that prohibited LGBTQ Americans from serving openly in the military. Aside from this, the message that painting bullets with the colors of the rainbow sends a bleak message – that imperialism and violence against innocent POCs is okay as long as the forces enacting them are diverse.

Some of the replies to the tweet also highlight the hypocrisy of the message. One tweet points out that it was a US Marine, Lance Corporal Joseph Scott Pemberton, who killed a transgender woman in the Philippines nearby a former US navy base.

Throughout June, the USMC takes #Pride in recognizing and honoring the contributions of our LGBTQ service members. We remain committed to fostering an environment free from discrimination, and defend the values of treating all equally, with dignity and respect.#PrideMonth #USMC pic.twitter.com/MOyvFmyJiB

E-commerce giant Shein is just one of many fast-fashion brands to release a Pride collection this year, with nearly 400 Pride-related products in its catalog. However, as Good On You reports, Shein has done next to nothing to support the LGBTQ movement with the proceeds.

Aside from this, Shein has been heavily criticized for its unethical labor practices. An investigation by Swiss advocacy group Public Eye found that workers would take on three shifts a day and only take one day off each month because they were only paid per item of clothing.

Shein’s lack of transparency on its carbon footprint and use of toxic chemicals in its manufacturing process also raises concerns about the sustainability of the business.

The fight against pinkwashing is important because it ensures that the LGBTQ community remains at the forefront of the Pride movement. When brands try to co-opt and capitalize on Pride, they divert attention away from the real issues that affect queer people every day.

So, what can we do to resist pinkwashing and support queer-led businesses? Shop at queer-owned businesses whenever possible, especially during Pride month. Advocate for more inclusive advertising from major brands. And most importantly, remember that the fight for equality is far from over.

Related: This bank has supported Pride for three decades. Here’s how it happened