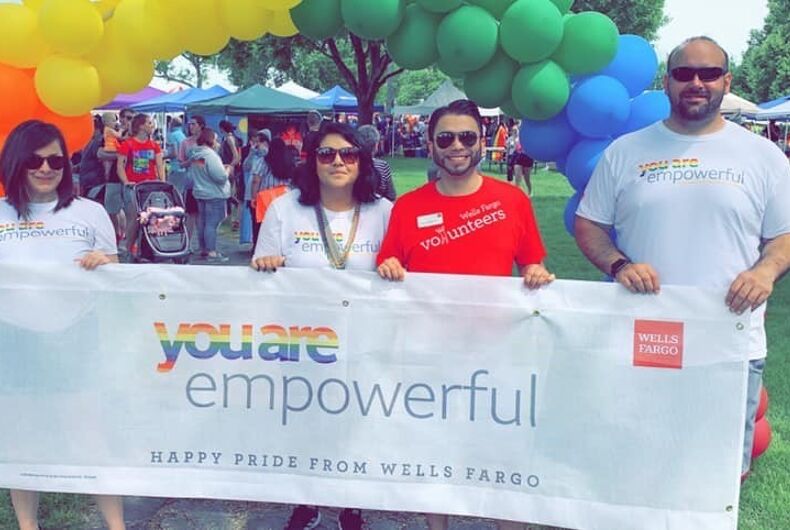 Wells Fargo team members at the Sioux Falls, SD Pride festival in 2019. The company makes sure to show up in small-town Pride festivals as well as those of larger cities. Photo: Peter Klien

Sure, lots of big companies have jumped on the Pride bandwagon over the last decade, but one of them — Wells Fargo — has been in the game for 30 years.

Long before Will & Grace premiered, Ellen DeGeneres came out or the Supreme Court legalized marriage equality, way back in 1987, Wells Fargo added sexual orientation to its non-discrimination policies (a protection still not guaranteed under federal law).

Four years later, Wells employees Tim Hanlon and Shannon Hickey attended what was then called the International Lesbian & Gay Freedom Day Parade in San Francisco. Hanlon and Hickey were so inspired that they decided to reach out to their colleagues to gauge interest in marching in the following year’s parade under the Wells banner.

Luckily, the company was already active in LGBTQ issues, donating to HIV/AIDS support groups. When Hanlon and Hickey joined 300 of their co-workers in an AIDS walk in Golden Gate Park in 1991, they introduced the idea of banding together to form an employee support network. From that day forward, an informal group was established to share information, communicate, and leverage a unified voice to advocate for change.

When the pair approached top executives with the idea of marching in Pride, they found overwhelming support; the following year, 1992, a hundred Wells employees marched in their first Pride Parade and five years after that, the informal group Hanlon and Hickey started became the company’s first Pride Team Member Network. Today the company includes more than 50 Pride Team Networks throughout the world involving more than 15,000 employees.

This month will mark 30 years of Wells’ commitment to Pride, and while employees are thrilled to have a chance to celebrate in person post-pandemic, a host of virtual events will offer participation to employees around the globe who may not be able to attend in person, connecting them to their larger Wells community and support.

Wells’ dedication to equality doesn’t end on June 30 though. Driven by the advocacy of its employees, and with steadfast support from senior leadership, the company’s commitment includes workplace support, financial health empowerment, philanthropic investments, and embracing LGBTQ colleagues, customers, and communities. (Our favorite moment of Wells history might just be when Franklin Graham had a hissy fit about the company’s groundbreaking commercial featuring a lesbian couple—to which Wells basically responded, “LOL that’s cute.”) Wells Fargo Foundation recently awarded $250,000 grants to both the Trevor Project and Transgender Law Center to ensure those organizations can meet the current needs of the most vulnerable members of the community.

Look for Wells Fargo LGBTQ employees and their allies marching in your local Pride parade and if you see them, know that this isn’t just another corporation jumping on the bandwagon. It’s a heartfelt show of support and commitment by a company that’s been there from the beginning.