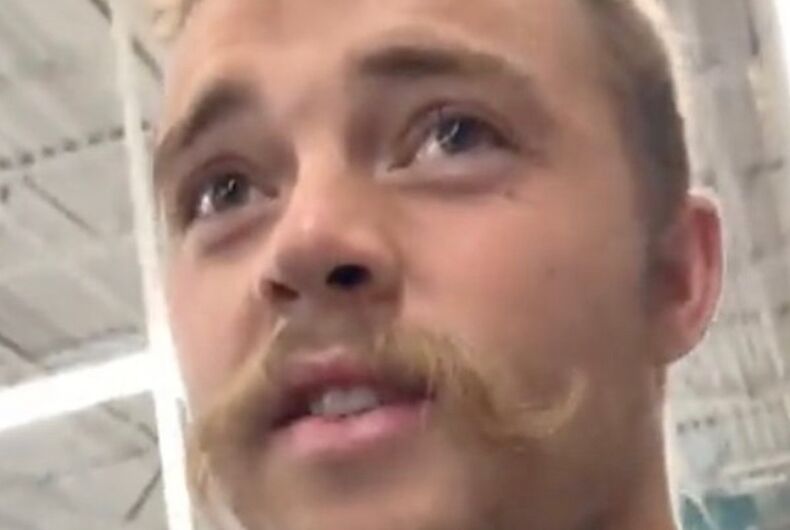 Web commenters are mocking anti-LGBTQ bigot Ethan Schmidt after he recorded himself being thrown out of a PetSmart store after repeatedly demanding that its employees remove a “Satanic” rainbow Pride flag display.

A video reposted by Patriot Takes — a watchdog Twitter account — shows Schmidt harassing employees and refusing to leave the store as a supervisor refuses to take down the flag and threatens to call the police if he doesn’t leave.

The video begins with Schmidt asking an employee, “I’m just curious, what is that flag right there?” while pointing to a rainbow flag hanging above the employee’s checkout register.

The employee responds, “I think it’s a Pride flag.”

Schmidt then asks, “Can you take it down please, right now?”

The employee asks, “For what purpose?”

Schmidt answers, “It offends me greatly.”

Without wasting any time, the employee summons a manager to come to the front of the store to address Schmidt.

While waiting, Schmidt says, “Yeah, that stuff is Satanic. We can’t have that.”

As the manager approaches, Schmidt asks once again what the flag is. When the manager replies that it’s a Pride flag, Schmidt says, “Can you take that down, please?”

The manager answers, “No. PetSmart supports belonging which includes for LGBT—”

Interrupting, Schmidt asks, “So you support pedophilia and child sexualization? Because that’s what that stands for.”

After the manager replies, “No” to Schmidt’s request, Schmidt continues, “They’re sexualizing kids with that flag, man…. I’m very offended and I would like for it to be taken down.”

The manager says, “Well…,” and Schmidt says, “Respect your customers and please take it down.”

The manager responds by shaking his head “no” and saying, “We aren’t going to. We are supportive of LGBTQ people here.”

Schmidt then claims that the “real reason” behind the Pride flag is that it is “the rainbow of Satan.” He adds, “The real rainbow is from God.”

The manager replies, “Thank you for coming by and sharing that with us, but we’re well.”

Schmidt then asks the checkout employee, “You don’t support that, do you?”

He says, “You support the sexualization of children.”

“No,” she replies. “I support the LGBTQ community.”

Schmidt then says, “You know what they’re doing to kids, right? They’re —”

The employee then says, “We’re asking you to leave. Please leave.”

The manager then says, “You’re breaking the law now because we have asked you to leave and you aren’t.”

Schmidt says, “They’re sexualizing kids with that propaganda. It’s disgusting. Our country’s going downhill because of them.”

The checkout clerk then calls for additional backup in the form of a supervisor. At which point, Schmidt, confusing the name of the store, says, “Wow. Petco sexualizes kids. They support the sexualization of kids.”

As the supervisor arrives, he asks Schmidt, “Want me to help you with something?”

When Schmidt repeats that the store is promoting the “Satanic” Pride flag, the supervisor says, “Okay, you gotta go, buddy,” while pointing to the store’s exit.

When Schmidt tries to repeat his line about the “sexualization of kids,” the supervisor says that he’s not going to get into it and adds that he can call the police.

Schmidt says, “Shame on you. Shame on Petco,” and the manager replies, “This is PetSmart.”

PetSmart manager stands up to Kari Lake supporter Ethan Schmidt, kicks him out of the store for harassing employees over a pride flag. pic.twitter.com/YGvFMG4cU9

A PetSmart spokesperson told Insider, “We are proud of our associates who deescalated this situation and reinforced our commitment to belonging.”

Patriot Takes also noted that Schmidt once posed for a photo with Kari Lake, an Arizona gubernatorial candidate who says that drag queens “sexualize” children even though a local drag queen accused her of taking her own child to one of his drag performances.

Schmidt, who was arrested in mid-June for failing to appear in court after a charge of “failure to comply with the law,” promised to “hunt” LGBTQ allies during Pride Month in a shocking video that was repeatedly shared with local law enforcement in Phoenix, Arizona.

In the video, he said, “We’re not going to let corporate poison the children… We’re going to be coming after you hard…. This is going to be next-level stuff.”

Apparently, “next-level stuff” means posting videos of yourself being kicked out of a store after politely asking the staff to remove a Pride flag (and failing three times over).

Schmidt was widely mocked on Twitter for his latest failed attempt at anti-LGBTQ harassment.

Religious satirist Mrs. Betty Bowers wrote, “This sad Ethan Schmidt person spends more time thinking about gay sex than most gay people I know. I think a peek at his browser history would be rather illuminating.”

This sad Ethan Schmidt person spends more time thinking about gay sex than most gay people I know. I think a peek at his browser history would be rather illuminating.

Twitter user @CockyNelson wrote of Schmidt’s mustache, “This is what women refer to as a contraception mustache.” @Megconk79 added, “If your stache looks like my Fallopian tubes, it’s a no for me, bro.”

This is what women refer to as a contraception mustache

Twitter users @SilencedMe1984 edited a photo of Schmidt showing him in a blonde “Karen” haircut often associated with over-privileged women who demand to complain to managers about petty grievances to get their way.

One Twitter user @Beesschalm wrote, “Thanks to Ethan, I will triple my normal purchase of dog food, treats and accessories from @PetSmart online and have shipped to my local animal shelter for the next 12 months. Thank you #Petsmart for accepting all humans.”

My dog died June 19th. Thanks to Ethan, I will triple my normal purchase of dog food, treats and accessories from @PetSmart online and have shipped to my local animal shelter for the next 12 months.
Thank you #Petsmart for accepting all humans

Should you move to Europe? How would you do it?