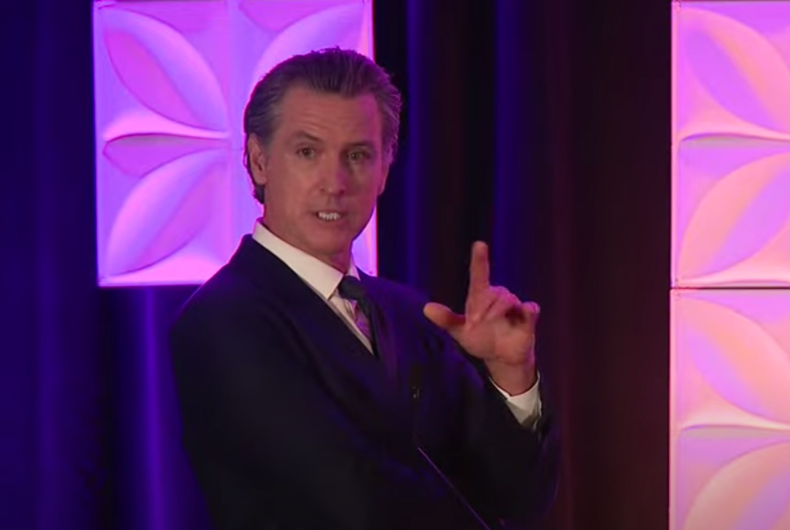 California Gov. Gavin Newsom (D) took the opportunity at an awards ceremony Wednesday to slam his anti-LGBTQ Florida counterpart Ron DeSantis (R) in their continuing stealth bids for president in 2024.

Newsom was in Washington, D.C. accepting the 2022 Frank Newman Award for State Innovation from the Education Commission of the States.

The governor compared Florida’s Parental Rights in Education law – also known as the Don’t Say Gay law – to California’s failed Briggs Initiative in 1978, which would have banned LGBTQ teachers from public school classrooms.

“Teachers were under assault, because, God forbid, teachers were homosexual,” Newsom recounted.

The so-called Briggs Initiative, a statewide ballot referendum sponsored by conservative Orange County state Sen. John Briggs (R), provided that public school teachers and staff be fired if an employee was found to have engaged in either “public homosexual activity” or “public homosexual conduct,” defined as “the advocating, soliciting, imposing, encouraging or promoting of private or public homosexual activity directed at, or likely to come to the attention of, schoolchildren and/or other employees.”

“Somehow, people were presupposing they were ‘grooming’ our kids. That was in the 1970s,” Newsom said.

Calling out DeSantis spokesperson Christina Pushaw, Newsom said, “Press secretary for the governor of one of our largest states” referred to those who oppose the Don’t Say Gay law “in Florida as ‘groomers.’ I think she was promoted, not fired.”

“Ronald Reagan himself in 1978 wrote an op-ed saying something that needs to be said today,” Newsom continued. “‘You can’t get gay,’ he said. He used the word homosexual. ‘You can’t catch gay like you can the measles.'”

“I don’t want to sugarcoat it,” Newsom warned. “Education is under assault in the United States of America. And we have an obligation, a moral and ethical obligation, to call out what is going on as it relates to the suppression of free speech.”

“We’re going to share the future whether we like it or not. But we can’t ‘other’ our differences. We can’t create false separateness that doesn’t exist. And we have to call out those who have a zest for demonization.”

“Forgive me in advance,” Newsom said as he accepted the award on stage. “You brought up a politician.”