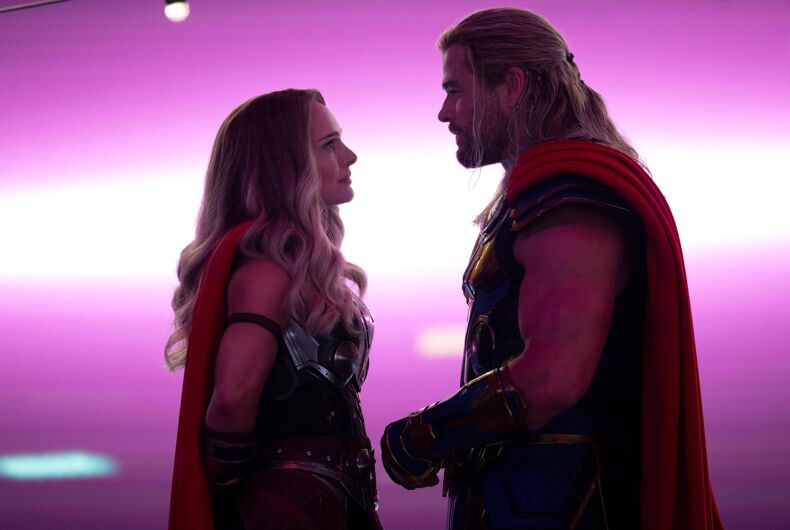 A lot of people are watching the new Thor film, Thor: Love and Thunder. The film has grossed over $175 million dollars domestically, but many fans were left cold after seeing the new Marvel film. And that comes down to broken promises the MCU has to its LGBTQ audience.

The new Thor film was touted as being “so gay” that audiences expected to see same-sex romances or at least same-sex affection. But audiences were served neither. It turns out that Thor: Love and Thunder isn’t as gay as it lead people to believe. There are no moments of LGBTQ romance to be found in the Thor film.

Thor: Love and Thunder follows Thor as he searches for inner peace. Having lost his brother and home in the previous Marvel films, he is on a quest to find out what life can be for a god that is no longer needed. Thor’s spiritual journey is interrupted; however, when he and his fellow Asgardians are targeted by Gorr the God Butcher who is intent on destroying every single god in the universe.

Here’s the problem with Thor: Love and Thunder: It queerbaits its audience into believing that the film will have LGBTQ representation when it does not.

Queerbaiting is a marketing technique that promises there will be a same-sex romance or other LGBTQ themes but does not actually depict them. Queerbaiting is well known within the MCU, where filmmakers claim that they offer the “first LGBTQ character in the MCU” or “the first LGBTQ superhero,” and yet their sexuality or gender identity is not paramount to the character or the plot of the film.

Audiences expected Thor: Love and Thunder to have queer themes in the film because Kevin Feige, Marvel Studios’ head, said back in 2019 that the new Thor movie would have an LGBTQ storyline.

“The answer is yes,” Feige said while discussing the new MCU film. That’s quite a big promise to make to fans who have been desperately waiting for LGBTQ representation since Iron Man came out back in 2008.

Also, during a fan panel with the cast and director of the film, when asked if Thor: Love and Thunder was gay, Waititi volleyed the question to Portman who said the film was “so gay.” A lot of promises were given to LGBTQ fans. What’s surprising is that Waititi didn’t pass the question to Thompson.

Thompson is an LGBTQ actor. When Thor: Ragnarok came out in 2017, both Thompson and Waititi confirmed that her character, Valkyrie, was bisexual. That was awesome news because that revealed that she was the first queer superhero in the MCU. The only problem? In Thor: Ragnarok it was up to the audience’s interpretation whether the character was bisexual or not. The character’s sexuality was not pertinent to the film.

So, when Kevin Feige promised there would be an LGBTQ storyline in Thor: Love and Thunder, audiences were hopeful that they’d get to see Valkyrie with a partner or at least pursue an LGBTQ romance. But in the film, Valkyrie is not in a relationship nor does she pursue one with another character. All Valkyrie gets to do is kiss a woman’s hand. If that’s an LGBTQ storyline, then Feige desperately needs to reevaluate his perception.

Detractors could argue that a kiss is a step in the right direction, or that the rock character Korg and the story of his home planet is queer representation. Korg tells the group that babies are born on his home planet when two rock men hold hands over molten lava. Supposedly, rock people can be coded as queer for LGBTQ humans.

Here’s the problem with queerbaiting: Queerbaiting erases and dismisses LGBTQ individuals. The characters aren’t seen as queer to a non-LGBTQ audience that could identify with and support the community. Stigma is created when LGBTQ people aren’t shown to an audience. But not only that, queerbaiting worsens mental health issues for LGBTQ youth looking for a positive role model in their favorite comic book movie.

This isn’t the first time Marvel has been accused of queerbaiting. When Eternals was released back in 2021, the film was criticized for presenting an LGBTQ family with a queer superhero only for the family to be quickly pushed to the sidelines and out of the film. Also, when Avengers: Endgame came out in 2019, directors Anthony and Joe Russo promised the inclusion of an LGBTQ character who appears and disappears within five minutes of the film.

Until Marvel can properly show the LGBTQ community in its films, audiences will continue to be critical of the representation they deserve.