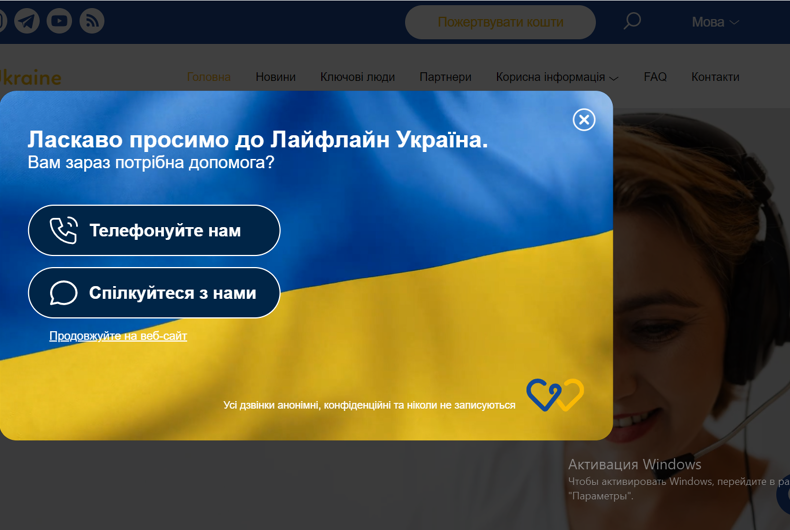 Lifeline Ukraine has both call and chat options available for those reaching out methods for help in Ukraine.Photo: Screenshot

Although numbers don’t lie, on occasion, the magnitude of what they represent is lost.

In the case of Lifeline Ukraine, Ukraine’s first dedicated suicide prevention organization, the almost 300% increase in calls coming into their organization since the beginning of the full-scale Russian invasion is a stark, harrowing reminder of just what havoc has been wreaked upon the psycho-social needs of the Ukrainian populace since February.

As overwhelming as it has been, however, Paul Niland, Lifeline Ukraine’s founder, has been preparing to meet this moment in history for the last two decades. Originally from Dublin, Ireland, Niland arrived in Ukraine almost 20 years ago and according to him, something temporary became permeant.

“I thought I might stay for 6 months. But this quickly became home,” adding, “It’s a very interesting country to live in.”

Being in the country for the better part of two decades has allowed Niland to witness the turbulent events leading up to Russia’s current war against his adopted land – events that played a role in the founding of Lifeline Ukraine.

“What was happening, just outside my front door, was history in the making and I wanted to be a witness to that. The Orange Revolution started because of the need to demand that voters are respected in this country, to stop the circling towards authoritarianism we have seen from blatantly fabricated election results in Russia and Belarus,” Niland told LGBTQ Nation. “The Revolution of Dignity started over the refusal to sign an agreement with the EU that had been over a decade in the making, but it soon got more energy as the focus shifted to tackling corruption and taking on the clan around Yanukovych.”

Being on hand during the two most famous protests in modern Ukraine, also meant that Niland lived the history unfolding around him.

“I was there every day during the Orange Revolution and 89 out of 93 days of the Revolution of Dignity,” he said. “Sometimes I would donate ingredients to the feeding stations, I was often in the press center in the trade union building, other times I would argue with people in uniform, something that I remember doing specifically on Christmas Day 2013.”

By 2018, with war raging in eastern Ukraine for four years by that point, Ukrainians began to suffer from the stress that came with the long struggle to push out the occupiers from Luhansk and Donbas. It was that year when Niland was approached about launching something that could be beneficial, specifically to the soldiers and their families who had been exposed to the horrors of the frontlines.

“I was asked to take responsibility for this (Lifeline Ukraine) in June 2018. A year of learning, planning, and also dealing with some personal difficulties then followed and we received our first grant from the British Embassy in Ukraine in June of 2019. From then it was a mad dash to get operational as fast as possible,” he said. “By September we had completed the team selection and experts from Israel then came here to train them.”

“We began operating on October 14th and apart from two brief power cuts we have been open 24/7 ever since. It still amazes me, to this day, that we had never had a suicide prevention hotline here in Ukraine. Suicide is, with the right intervention, one of the most preventable causes of death, and we had never had an appropriate national answer to this situation.”

Although the Lifeline Ukraine website still touts its focus on members of the military, Niland made clear that anyone is welcome to call, and no one is discriminated against when they do.

“When we begin a call, especially a crisis call, we don’t have space to ask too many questions of someone, our job is to listen and to help them breathe, and to stabilize them. Whether the caller is of military background or not, we don’t differentiate. We just help.”

He then specifically addressed calls that came from members of the LGBTQ community.

“A person’s sexual identity or sexuality may be a reason for them to call us, linked to maybe not having come out to the parents or friends, or linked to bullying because they are openly queer, but at the end of the day we are all the same and our psychology works in the same way,” Niland said. “So the consultations we would give to someone from the LGBTQ community would not be any different from how we would help anyone else, the exact same level of care is there for anyone at any time. Whoever they are.”

Niland, who has a managerial and human resources background from his days as an executive in the publishing industry, made it clear that Lifeline Ukraine relies on a staff of highly trained, paid employees to navigate the vast increase of those suffering who are calling in for help. The hotline is operated 24 hours a day, seven days a week.

“Prior to February 24th of this year, we had been holding stable at roughly 1,000 calls (or chats) per month. In June we had 2,775 calls and chats. Our team is made up of dedicated professionals who are paid for their working time. There are 24 people in total on the team, as many of our colleagues were veterans they were recalled to military service on February 23rd, bringing the number of people who had to cover the increased workload down to 13. We have since welcomed a couple of old colleagues back to get our numbers up to 17 as of today.”

When running an organization where the goal is to save lives, collaboration is important and, according to Niland, Lifeline Ukraine works with other social service organizations “all the time.”

“This is a key part of our work,” Niland pointed out. “We are often referring help-seekers to various kinds of support resources and we have an extensive database of them.”

Call types are “influenced by events of the day” with Niland “organizing a series of training sessions from leading Ukrainian experts in conflict-related sexual violence, as well as on bereavement and issues related to being displaced by war. We are encountering all of these issues, and more, every single day,” yet his message to potential callers who are queer, and society as a whole, is one of welcoming nonjudgment, no matter their pain of the moment.

“Everyone struggles, regardless of orientation, to establish who they are to be as a person, while you go through that journey if you need to talk to someone, there’s always someone to listen to you at 7333.”

With partners in place, and an extensive database of supporters that has ranged from Vodafone to the British Embassy, and currently includes USAID and Americares, Niland is looking toward the future, as the war around him grows fiercer every day.

Opining that as a nation five years from now Ukraine would be “an example to the world of heroism and resilience under adversity. By that time we will be well into the national rebuilding that comes after the victory, and I believe that is going to be an incredible thing to witness. The regeneration of this nation will be another special period in the history of Ukraine,” Niland also laid out Lifeline Ukraine’s roadmap.

“One thing that I’m dedicated to doing is building an endowment for us. To run this organization costs money, and so to secure our permanent existence I want to raise $4.5 million, a sum from which we would be able to cover our operational costs on returns on investment without ever touching the capital sum. Where we will be in terms of call volumes and so on, we have no way of knowing what that might look like, but I know that we must always be here and can never be allowed to close. We are here to serve the people of Ukraine and always must be.”