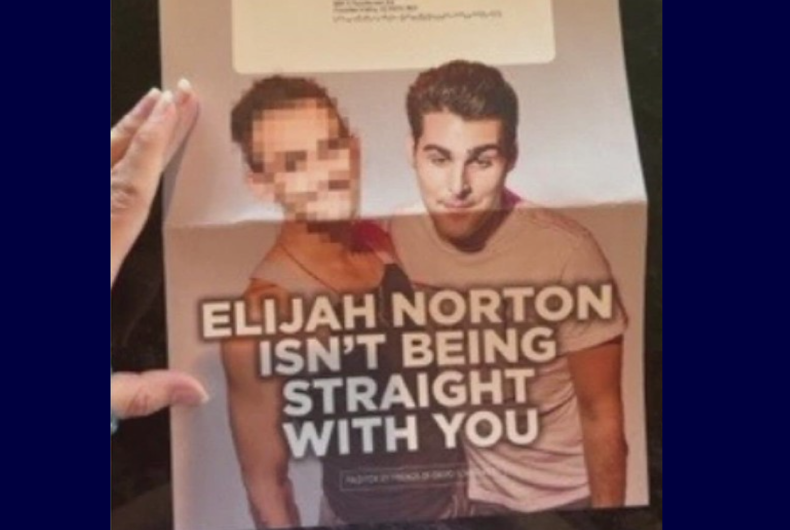 The Schweikert campaign mailer with the picture of Leslie Hammon and Elijah NortonPhoto: Screenshot

A Republican Congress member from Arizona is getting sued for using a picture of his male primary opponent with a male friend and implying that they are a gay couple.

The lawsuit involves a mailer sent by the campaign for Rep. David Schweikert (R-AZ) as well as some street signs about one of his primary opponents, Republican and car insurance company founder Elijah Norton. The mailers and signs used a 2018 picture of Norton with his friend Leslie Hammon, 34, where they’re outside of a bar and have arms around each other’s shoulders. Hammon is gay.

“Elijah Norton Isn’t Being Straight With You,” the caption read.

Hammon’s face was blurred out in the mailer and signs, but he’s saying that his image was illegally used.

Hammon and Norton met years before Norton ran for office through his then-girlfriend.

“Although Hammon and Norton are friends, they are not and have never been in any romantic or sexual relationship,” the lawsuit says.

“The letter said I’m a private citizen. Please leave me out of this,” Hammon said. “My mental health has taken a pretty rapid decline. I had to take a leave from work for a couple weeks.”

Hammon also took issue with the implication that “someone who is gay is unfit for office,” according to AZ Central.

He said that people at his work recognized him in the photo on the street signs earlier this year.

“It’s extremely unsettling because I am openly out,” he told 12 News. “But at what point is my privacy going to be respected?”

He said that he sent a cease and desist letter to Schweikart in June but he got no response. Instead, in late June, the campaign sent out mailers with the same image and caption as the street signs had. Hammon believes that they sent around 50,000 such mailers.

Now Hammon is suing for defamation.

“Schweikert’s advertisements are intended to convey, and clearly do convey, a message that gay people do not belong in Congress or any other public office,” the lawsuit states. “They also clearly convey the patently false assertion that Hammon and Norton are currently or have previously been in a romantic or sexual relationship.”

“Pandering to homophobic narratives in the hopes of being re-elected is truly despicable and demeaning to the congressional office.”

“If your client… is concerned about privacy, I would suggest he not pose for photographs in public places such as bars,” said the lawyer for the pro-Schweikert PAC Americans for Accountability in Leadership. “But my client will not be deprived of its First Amendment rights.”

“This is harkening back to decades ago when gay people were afraid to come out of the closet,” said Bridget Sharpe, HRC’s Arizona state director.

This isn’t the first time that Schweikert has been accused of lobbing anti-LGBTQ insults at political opponents. In 2012, his campaign sent a mailer implying that his opponent bisexual, the Norton campaign said.

The mailer said of then-Rep. Ben Quayle (R-AZ): “He goes both ways.”

In 2014, Schweikert’s campaign sent an email to supporters that said “Politics Is Not for Pansies” in the subject line. Schweikert said that people were “freakishly sensitive” and that he wasn’t using the word as an anti-gay slur but claimed that he was literally referring to the flower.

Schweikert has gotten a score of “0” on the last three HRC Congressional Scorecards, showing his solid opposition to equality for LGBTQ people.

The Arizona primary is scheduled for August 2.

A Florida university denied rescinding lesbian student’s acceptance, but she had the receipts