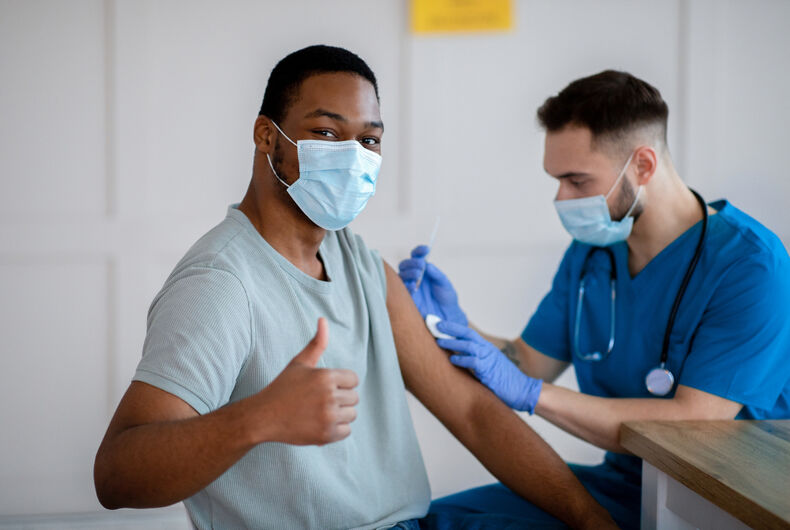 As MVPX, also known as monkeypox, is spreading rapidly in the United States, and with vaccination appointments in short supply, intrepid residents of Washington state are crossing the border to Canada for the jab.

“Got the first dose of the monkeypox vaccine!” Moore posted to Twitter. “For any friends in the Seattle area, check clinics in British Columbia! They are happily providing vaccines to US citizens!”

got the first dose of the monkeypox vaccine!

for any friends in the Seattle area, check clinics in British Columbia! they are happily providing vaccines to US citizens!

In the U.S., demand for the two-shot Jynneos vaccine, from Danish developer Bavarian Nordic, is outstripping supply, with a backlog of vaccination appointments and limited eligibility requirements.

In Washington state, only those who have been in close contact with a confirmed MPXV case or those who have contracted the virus can get the vaccine.

“King County health was being very slow with the uptake of access to dosing and communicating in general,” Moore told KING5 News in Seattle.

“It became apparent to me that I was going to have to seek out other places to get it. It was actually very easy, very seamless.”

British Columbia is offering vaccinations to any adults who identify as gay, bisexual, transgender or as men who have sex with other men, and have had sex in the past 21 days, or plan to.

Seattle resident Grover Cleveland wanted the vaccine ahead of an upcoming trip overseas, so he made the trek to Vancouver last weekend.

“They obviously don’t have an unlimited supply either,” Cleveland told the Seattle Times.

“When I got there, I said I was from Seattle and that I didn’t know if this would work,” Cleveland recounted. “They just said, ‘Well, we’ll make it work.’”

Seattleite Adam Feinstein also made the trip to Vancouver.

“A lot of people, including myself, have been waiting around with bated breath,” he said. “When I heard word that there was an opportunity to go to Canada, for me it was a no-brainer. Why wouldn’t I take this opportunity?”

The MPXV vaccine — known as Jynneos in the U.S. and Imvamune in Canada — is meant to be given in two doses, 28 days apart. But with supply issues, health care professionals have been given guidance to use a “ring vaccination approach.”

“A single dose will provide greater coverage in a time with supply concerns,” according to University of Manitoba virologist Jason Kindrachuk.

Over the weekend, the World Health Organization deemed the current monkeypox outbreak a “public-health emergency of international concern.”

MPXV, a close relative of smallpox, first jumped to humans in 1958. It has become endemic to two groups of countries in Central and West Africa.

Symptoms, which are very rarely life-threatening, include fever, chills, fatigue and muscle pain, followed by a distinctive rash. Indications emerge five to 21 days after exposure, while infectiousness takes two to three weeks to subside, ending around the time lesions scab over and recede.

This week, an online booking site for a clinic in Vancouver had 737 open appointments for MPXV vaccination.