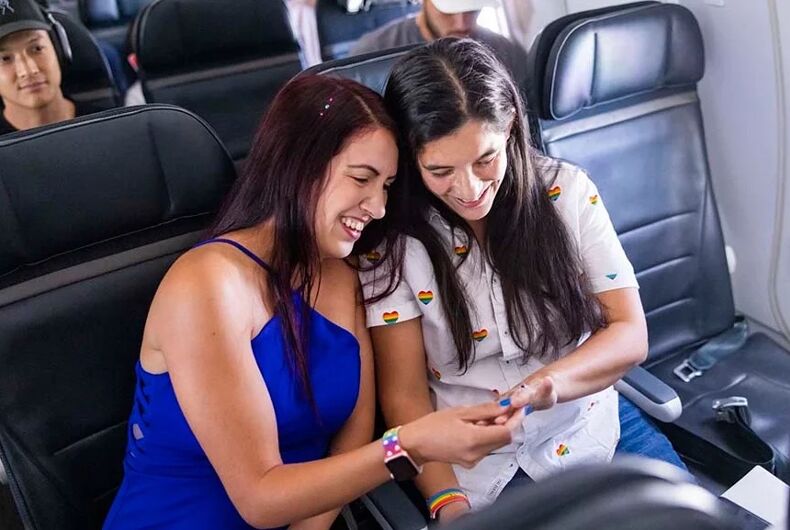 Moncayo explained over the PA system that the two met aboard an Alaska Airlines flight to San Francisco in 2020 while Rojas was working for the airline as a flight attendant. In response to this information, passengers cheered and applauded as two nearby flight attendants flapped their rainbow-colored fans in approval of the couple.

Rojas admitted over the PA system, “[Alejandra] did not have any interest in me when we met. I walked up to her and was trying to impress her with my speaking Spanish. Um, the problem with that is that I don’t actually speak Spanish, so it did not work out very well. But hey, it worked out anyway!”

She added, “I’ve actually been practicing my Spanish, and if it’s okay with you guys, I wanna practice some right now.”

Then, in Spanish, Rojas said, “Alejandra, my love, I love you with all my heart. For my whole life, I will never stop loving you.”

Then, after getting on one knee and stating Moncayo’s full name, she said, “My goddess. With you, I’ll go to the skies. Would you do me the honor of being my wife?” She then pulled a small ring box out of the side of her dress and opened it, presenting a ring to Moncayo.

Moncayo then kissed Rojas, and Rojas put the ring onto her partner’s finger as the passengers cheered and the flight attendants flapped their fans open and closed.

Rojas said that when she told higher-ups at the airline of her desire to propose aboard a flight, they helped ensure that it went well. Additionally, the airline also gave all the flight’s passengers free tickets for a future flight.

However, unbeknownst to Rojas, Moncayo had also planned on proposing. As they deplaned the flight and walked towards the gate, Moncayo proposed. Of course, Rojas accepted.