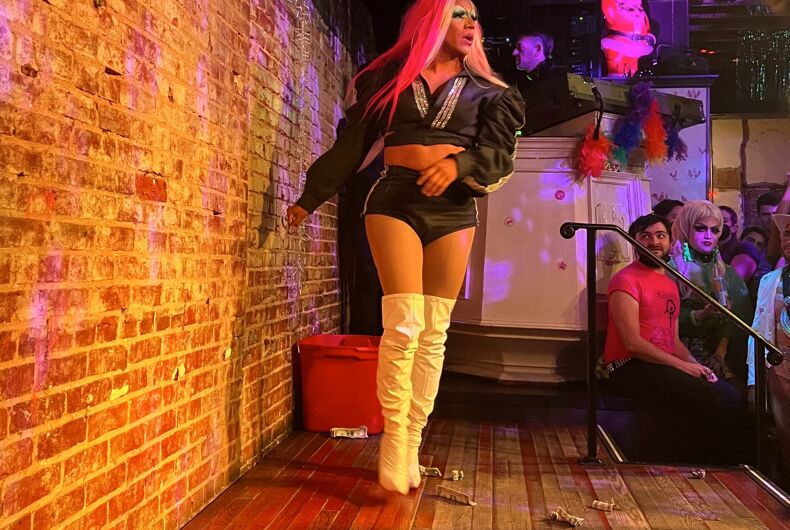 The decades-long effort by Republicans to ban abortion paid off big time last month when the Supreme Court overturned Roe v Wade, the 1970s-era case that legalized abortion nationwide. Abortion is now outlawed (or on the way to being illegal) in 26 states including half a dozen with no exception for rape or incest.

Conservatives have long wanted to control the outcome of every pregnancy in America and their wishlist includes banning contraception and rolling back gay rights in ways that go well beyond ending same-sex marriage. Now they’re one step closer to their goal.

“Justice Clarence Thomas’s written decision suggests that the decisions which established the right to contraception, privacy in the bedroom, and marriage for same-sex couples should be revisited and overturned,” Rep. Bonnie Watson Coleman (D-NJ) told LGBTQ Nation.

The controversial ruling that banned abortion in half of America outraged Manuel Montelongo of Washington DC, a self-described “Mexican man in a wig” also known by the drag name Mari Con Carne.

Within hours of the ruling, Montelongo was on social media with a challenge.

“I am willing to volunteer my time as a performer to any bar in DC that wants to host a fundraiser for any local abortion fund, Planned Parenthood, abortion rights group… you get the point,” he posted. “No booking fee. All tips get donated. Let’s talk.”

Pretty quickly, the folks at Trade, a popular gay bar in Washington, D.C., came calling about a drag fundraiser for the National Network of Abortion Funds, a group devoted to political organizing at the “intersections of racial, economic, and reproductive justice.”

“We did the research and found them to be the most suitable,” said Ed Bailey, the civically-wired owner of Trade and Number Nine, another popular DC queer watering hole.

“The last few weeks, a lot of Supreme Court decisions are weighing on our community,” Mr. Bailey told LGBTQ Nation before the show. “I know tonight’s event is going to be successful because I know people respond to the things we do at this bar.”

For Bailey, success means money for abortion rights while creating community and an outlet for anyone who feels harmed by the Supreme Count’s recent onslaught.

“Sometimes women don’t get all the support that they should get from within our own community,” Bailey said. “Everybody, but at this point specifically, women need this kind of support. They need to know that we’re here and tonight’s event is an opportunity for people to show that.”

Mr. Bailey explained that in neighboring Virginia, abortion rights are suddenly precarious thanks to a newly-elected right-wing governor and a narrowly divided state legislature.

“DC and Maryland are probably going to be okay for women to get reproductive health care and have access to safe procedures,” Bailey said. “But you don’t know what’s gonna happen in Virginia which is one or two votes away from changing the law.”

This bewildering new patchwork of laws highlights that the right to abortion fades in and out as people travel around America and the region.

Bailey emphasized “the immediacy of making sure we are modeling some kind of behavior for people to do something and not just to bitch about it, but step forward and find a way to help out. If you can’t physically do things, there’s a lot of money in our community and a lot of good that this money can do if we’re finding places to put it.”

Shortly before the show began, Montelongo told  LGBTQ Nation that it’s past time for queer people with money and privilege to join him in the activist trenches to battle a Supreme Court with LGBTQ rights in its sights.

When Montelongo (as Mari Con Carne) finally took the stage, she got right to the point.

“I hope to have a good time while also raising funds for a worthy and important cause, the National Network of Abortion Funds,” they said. “I spend a lot of time just talking and not really doing any actions and feel like a lot of us do that. This is your call to action! Right now we take action! Revolutions begin in small crowds of like-minded people who want things to change. And that is us tonight!”

The packed house roared and when the pulsating music began, dollar bills rained down for the duration of Montelongo’s acrobatic set, a performance filled with handstands and a back handspring while wearing 6-inch heels.

The 45 minutes show included 6 performers, all of whom donated their time and talent to support abortion rights. For the finale, the queens took the stage for a rousing performance of “What’s Up?” the feminist anthem by 4 Non Blonds. It’s an easy sing-along song and this crowd did not disappoint.

Afterward, Trade matched the tip tally, $2328 in all, for a total donation of $4656 for the National Network of Abortion Funds.

If drag queens fundraising for abortion rights becomes a trend in our post-Roe reality, it’s yet another example of gender-nonconforming LGBTQ people stepping up to protect those most harmed by right-wing policies.

“This moment is going to be an awakening for some people,” said Bailey whose tenure as a stalwart of DC’s nightlife scene began during the AIDS crisis when any night out could overlap with an AIDS fundraiser or memorial.

And so there’s a dose of activism with your nightlife again, this time necessitated by a hostile Supreme Court that’s poised to undo decades of progress.

“We have these spaces, we have this power of being able to direct people and try to bring people along and leverage our spaces and popularity for good,” Bailey added. “This is what we do. These are our communities. These are the places where we rally for support and look for some optimism. We come together and try to figure out how to help each other.”

And on this night, a drag show for abortion rights was organized by a crew that knows how to play the long game.

“When we started to plan this fundraiser tonight, I was like let’s pace ourselves because I think this is going to be an ongoing thing,” Bailey said. “Over the years and years and years of doing fundraisers, a lot of efforts to raise awareness, recruit volunteers, these events used to feel more urgent and I think it’s gonna open back up and we’re going to have to start doing larger things again.”