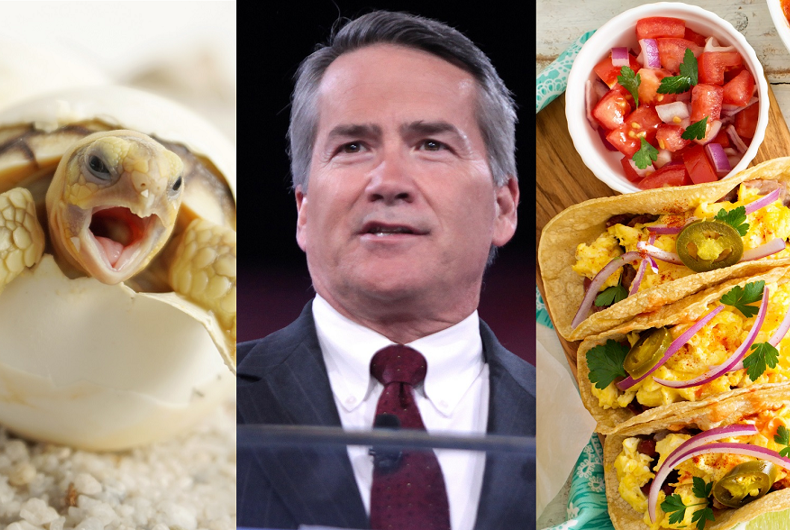 Rep. Jody Hice (R-GA) used some strange imagery to make a point about his opposition to abortion rights during a House Oversight Committee hearing about abortion rights in post-Roe America earlier today. Hice was trying to say that all children born are human beings while questioning National Women’s Law Center president and CEO Fatima Goss Graves.

“Is there any instance of a woman giving birth to something that is not a human being?” Hice asked. “Like… a turtle? Or, as our first lady suggested, a breakfast taco?”

Hice asks if a woman can give birth to a turtle or a taco pic.twitter.com/HKjbzklRQr

The breakfast taco comment is a reference to a statement made by Dr. Jill Biden earlier this week where she compared diversity among Hispanic people to the diversity of Hispanic American food and cited the breakfast taco while speaking in San Antonio, where breakfast tacos are a big deal. It was an awkward comment that Republicans attacked and Biden apologized for.

Goss Graves ignored the turtle and taco question and responded, “Well, there are definitely instances where people have stillborn.”

Her point is valid when discussing abortion legislation; a stillborn is when the fetus is dead after 24 weeks of pregnancy and an abortion – or the termination of a pregnancy – is often the recommended treatment to protect the health of the parent carrying the dead fetus.

Goss Graves was lost at this point, and Hice tried to cut her off again, stressing that it was his time.

“Oh, I thought you were asking…. So I was wanting to have an opportunity to explain,” she said. “So it’s not a question of turtles or… I’m not really sure what it is a question of.”

She then suggested that maybe he was asking about contraception or in vitro fertilization, and he accused her of mischaracterizing his question, the one about the turtles and tacos.

“No, no, you mischaracterize,” he said. “I’m having a clear discussion about abortion and the fact that it is a person, it is a person that we’re dealing with. And that person after birth clearly is a person. And therefore, by extension, before birth is also a person. And the question comes down to when does a person have the right to life and when does a person have the right to health care? And we can argue all day that it’s- that abortion is health care. It certainly is not health care to the baby. Health care protects life and abortion, by definition, destroys life. It is not health care. But if we’re talking about a person, which we are. We’re not talking a taco [sic]. We’re talking a person [sic]. In the womb.”

Hice has a long history of opposing LGBTQ rights and has earned a score of zero on the last three HRC Congressional Scorecards, signifying his solid opposition to LGBTQ people’s equality.

Hice opposes bans on conversion therapy – a form of quackery that promises to turn gay and bi people straight and trans people cis – because he said that homosexuality “enslaves” people.

“We are enslaving and entrapping potentially hundreds of thousands of individuals in a lifestyle that they really are not – and it’s all for the sake of political correctness,” he said during a 2013 radio program. He also compared being gay to alcoholism, drug addiction, “tendencies to lie,” and “tendencies to be violent.”

“To say that a person is born gay, if we are going to go down that path, then what is going to stop us from saying that a person is just born violent, and so we’re going to give them a pass and protect them from having any intervention therapy preventing that violence?” he said, according to the Washington Post.

He also insisted that “homosexuals have the right to be married” – before the Supreme Court legalized same-sex marriage in every state in 2015 – just not “to one another.”