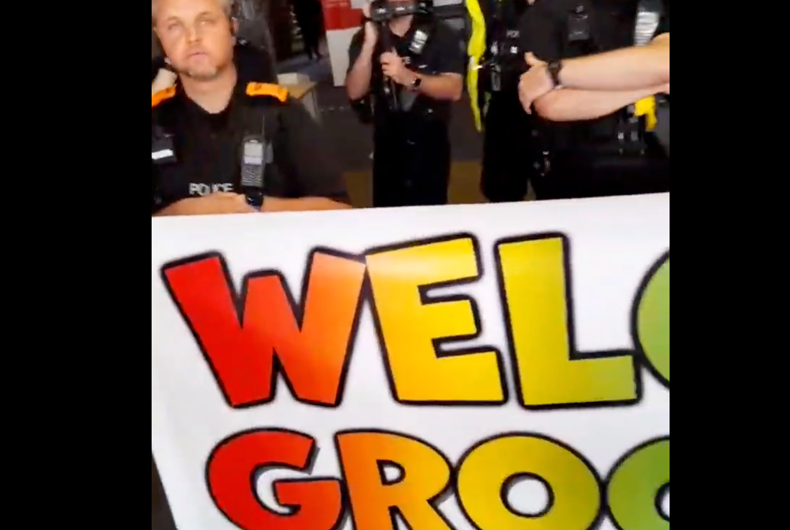 At the first story hour at Reading Central Library, two women posing as attendees shouted as the reading begins.

They accuse the Drag Queen of grooming children and ‘Wokeism’ before being asked to leave.

“This is disgusting! He’s a child groomer, this is child grooming!” one of the protesters yelled as children scream and one mother begins crying.

“There are only two sexes!” the woman yelled.

After scuffling with library security and police, the women were led from the building. The room erupted in applause.

“She had used her own disabled son as a Trojan horse,” Samuel told PinkNews, adding: “The child had a meltdown and was screaming as she laughed. She should be ashamed.”

Samuel was escorted from the library by police as several protesters harassed them, chanting “Pedo protection!”

Samuel said, “Police had to escort me out of the building and make a human shield because they were literally chasing me.”

At the second event at the Tilehurst Library, leader of the group, Michael Chaves, confronted police with his camera, demanding admittance to the event so they could make a “citizens’ arrest.”

NEW: #SovereignCitizens attempt to enter a library to arrest a Drag Queen.

Protestors harass parents as they walk in, accusing them of taking their kids to see a ‘paedophile’.

As police officers kept Chaves at bay at the library entrance, he told them: “You arrest him then. You obviously know the guy’s dressing up as a drag queen. You know it’s grooming children. It’s a pedophile. It’s an act of pedophilia. Grooming children.”

When the officer declines, Chaves said: “So we’ve got a line of pedophile protectors in front of us.”

“If I thought they were a sex offender, I’d arrest them,” the officer responded.

As parents and children squeeze past the phalanx of officers, Chaves confronted them: “You aren’t taking your child in to see a pedophile, are you? What a very strange thing to do.”

Chaves was joined by several other protesters holding signs with slurs and a banner reading “Welcome Groomers” in rainbow colors.

After the events, Chaves posted photos of the officers with a directive to followers to “name and shame” them.

This is now being shared across numerous telegram groups. pic.twitter.com/jwuGT82vDA

A screed posted by Chaves later provided insight to the group’s conspiracy-laden motivations:

“It’s pedophiles who rule this world. Satanic pedophile ruling elites. They’ve got to where they are trading in children, raping children, killing children. That’s how they’ve reached the top of the ladder, whatever walk of life it is.”