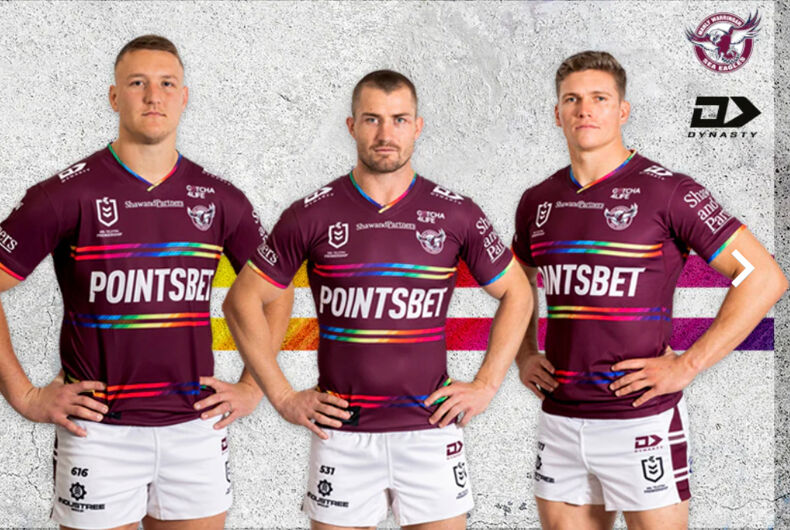 Seven players on an Australian professional rugby team are refusing to wear a gay Pride jersey meant to promote diversity and inclusion. The players for the Manly Warringah Sea Eagles have opted instead to sit out Thursday’s match against the Sydney Roosters.

According to Australia’s Star Observer, the Sea Eagles are set to become the first team in the National Rugby League’s 134-year history to sport an official LGBTQ Pride jersey. The men’s version of the jersey reportedly sold out online hours after news of the players’ boycott broke.

The seven players reportedly complained about wearing the rainbow-themed jersey after it was unveiled on Monday. On Tuesday, it was reported that at least three of the players had changed their minds about the decision to sit out Thursday’s match.

“Of the seven players who are refusing to wear the jersey, at least three now have had a bit of a change of heart and are considering wearing the pride jersey for this upcoming round,” sports reporter Michelle Bishop said.

At a Tuesday press conference, Sea Eagles coach Des Hasler defended the players and expressed regret for the rollout of the Pride jersey. “They were not included in any of the discussions about the decision-making with the jersey — at a minimum they should have been consulted,” he said while also reiterating the team’s commitment to diversity and inclusion.

“Our intent was to be caring and passionate towards all diverse groups who face inclusion issues daily. Sadly this poor management has cause significant confusion, discomfort and pain for many people,” Hasler explained. “In particular those group whose human rights we in fact attempting to support.”

“This isn’t unfamiliar,” said former Sea Eagle Ian Roberts, who came out in 1995 while playing for the team. “I did wonder whether there would be any religious pushback. That’s why I think the NRL have never had a Pride round.”

Roberts said he has been trying for years to get the NRL to hold a Pride round. “It still hasn’t got the traction it deserves,” he said. “It saddens me because they think having a float at the Mardi Gras is enough and it’s not.”