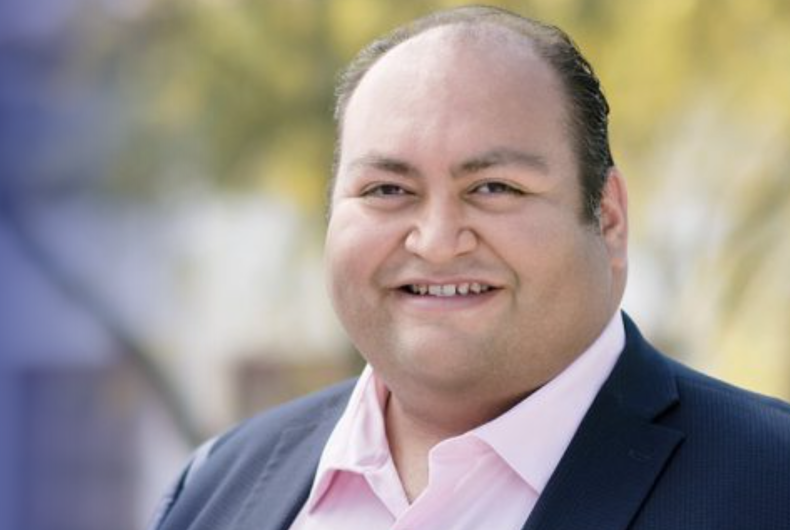 Daniel Hernandez survived a mass shooting rampage and is currently running to represent a sprawling Congressional district in southeast Arizona. The newly configured 6th district borders Mexico and also includes a military base. So you might think immigration or gun safety or veteran’s issues would be top of mind.

But for Hernandez, a three-term state lawmaker and self-described “policy wonk,” the most pressing issue facing America is the sudden, apparent brittleness of our democratic system of government.

“I’m most excited about protecting our democracy.” Hernandez told LGBTQ Nation. “When we’re looking at what’s happening right now, places like Arizona tried to pass over 100 different laws making it harder for people to vote. We have an election where we have election deniers leading the polls for Secretary of State and for Governor. I think, for me, one of the main things that I want to work on is protecting our democracy, updating the Voting Rights Act, making sure that we pass expansions of the John Lewis Voting Rights Act, and that we look at protecting everybody’s fundamental rights vote. Because without that nothing else matters. If you don’t have a protected right to vote, you can’t fight for LGBTQ issues.”

According to Hernandez, who previously ran the National Latino Outreach Program at Planned Parenthood, abortion rights are a top legislative priority. With the recent Supreme Court decision upending Roe v. Wade, abortion is now outlawed or soon will be in 26 states including half a dozen with no exception for rape or incest.

“People don’t understand that in states like Arizona, living in a post-Roe world doesn’t just mean that it’s harder to get an abortion, it means that it is completely illegal right now in the state of Arizona to have an abortion. So anybody who gets pregnant who is for example, now pregnant and carrying the child of their rapist, is now going to have to carry that child to term. And I think that is something that is so absolutely devastating.”

Hernandez sees a link between abortion rights and the battle for LGBTQ equality.

“The LGBTQ movement and the reproductive rights and reproductive justice movements have been intrinsically tied because LGBTQ people have been at the forefront of fighting for bodily autonomy, which is what this (abortion) conversation is about,” he said.

When the interview turned to the 2011 mass shooting that propelled him onto the national stage, Hernandez kept the focus on the six souls who perished that day and the 13 people gravely injured, including his boss at the time, former Rep. Gabrielle Gifford (D-AZ).

“We are grateful to Daniel Hernandez,” President Barack Obama said at the time. “Daniel, I’m sorry, you may deny it, but we’ve decided that you are a hero.”

In an interview with LGBTQ Nation, Hernandez let his actions that day and every day since speak for themselves.

“(The shooting) was a wake-up call for me that we need elected officials who are willing to stand up to the gun lobby,” Hernandez told LGBTQ Nation. “We need officials who are willing to put in the work to stand up with these folks whose lives are being radically changed as Gabby’s was, or as my colleague Jennifer London who’s in a wheelchair for the rest of her life. But if we don’t have advocates standing up and fighting for those people, these folks don’t have a voice. So for me, it cemented in myself the desire to stay involved in advocacy. And then I have fallen into running for office and now I have been an elected official for 11 years.

That stint includes five years on the local school board followed by six years in the statehouse.

For the past 3 years, Hernandez has served alongside his sister, Alma Hernandez, in the Arizona statehouse representing neighboring districts.

“We are the first brother and sister to ever serve together and it’s a very incredible experience,” he told LGBTQ Nation, his voice thick with big brotherly affection.

And even though blood is thicker than water, for this politically-minded clan, constituents come first.

Hernandez, who’s giving up his seat in the state legislature to run for Congress, might be replaced by another sister, Consuelo Hernandez, who currently serves on Arizona’s Sunnyside Unified School Board.

“So we went from a family where my dad hadn’t voted in 20 years until 2008 when I registered him to vote when I voted for the first time in a long time, till now all three of us are currently elected officials,’ he told LGBTQ Nation.” And very soon we’re going to have two members of the legislature and one member of Congress and my sister Consuelo, when she joins Alma in Phoenix next year, they’ll be the first sisters in Arizona State history to serve in the legislature together.”

It’s a family story made all the more remarkable since Hernandez, the “oldest” member of a budding political dynasty is only 32 years of age.

Hernandez’ remarkable story and boundless potential caught the attention of LGBTQ Victory Fund, an organization devoted to electing more LGBTQ office holders. They called Hernandez a “game changer” and made his bid for Congress a top national priority.

“People of color, young people and LGBTQ people are demanding a government more representative of the people it serves – and Daniel is the best candidate to mobilize that coalition and inspire change in the U.S. Congress,” LGBTQ Victory Fund CEO Annise  Parker told LGBTQ Nation. “He knows firsthand the immigrant experience, the devastation of gun violence, and the poisonous impact of anti-LGBTQ politics. He will ensure the policies that would improve the lives of most Arizonans remain central to political discussions in Washington, much as he has in the state legislature. Arizonans need to elect the next generation of leaders who can guide America into the future. Daniel is a person worthy of that responsibility.”