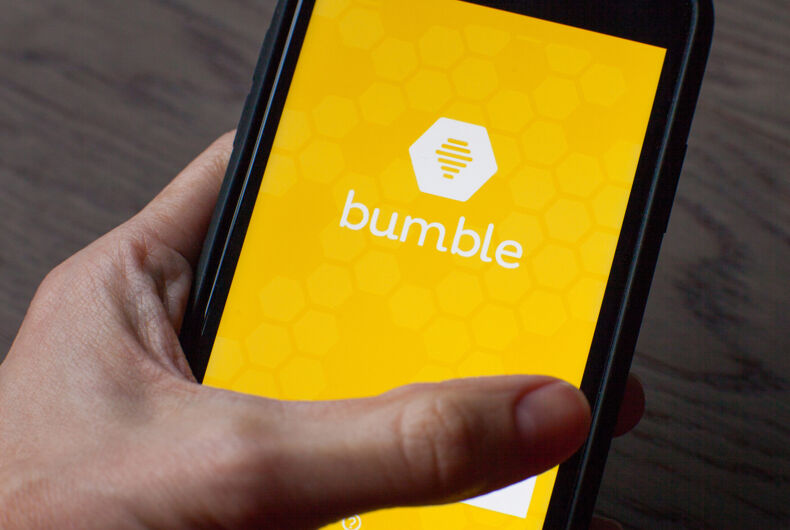 A user of the dating app Bumble has said that that app won’t them message other users anymore now that they have changed their gender to non-binary. A Bumble representative told LGBTQ Nation that the company has pledged to resolve the issue.

Because many men act like sexual creeps on dating apps, Bumble has a policy where only women are allowed to “make the first move” by messaging any men that they match with. This policy, however, presented a potential issue when it comes to non-binary users.

A 23-year-old New York City-based Bumble user who goes by stupidfairyfox on the video-sharing platform TikTok recently shared a video of themself in a bathroom mirror with a text overlay that reads, “Bumble let me set my gender as non-binary and now it won’t let me message first.”

The video includes a screenshot of a Bumble message stating, “Women make the first move: Mikayla has to message you within 24 hours before the match expires.” Stupidfairyfox’s video has since gotten over 1.1 million views.

Bumble partnered with the LGBTQ watchdog organization GLAAD to create its gender options. The app currently allows non-binary users 21 options for describing their gender identities, including agender, bigender, genderfluid, genderqueer, gender questioning, neutrois, non-binary man, non-binary woman, pangender, polygender, transmasculine, transfeminine, two-spirit, as well as a “tell us if we’re missing something” option where users can tell the app’s administrators about a different identity that they would like to see included in the list.

Additionally, the app gives male and female-identified people each five gender identities to choose from. Users can also select the gender of the people they’d like to match with.

“These updated gender selections are an essential step to help ensure everyone can express themselves and make safe, meaningful connections on Bumble,” Bumble states on its website.

An estimated 11 percent of LGBTQ U.S. adults identify as non-binary, according to the UCLA School of Law Williams Institute. A report from the women’s website Bustle revealed that many dating apps don’t give non-binary people diverse gender options to choose from or don’t give them the ability to specify what kind of users they’d like to date.

Non-binary people are also often subject to abuse or harassment on such apps.

Update (July 18, 2022): This story has been updated to include a statement from Bumble.

Scared that America is collapsing? Here’s how to move to another country