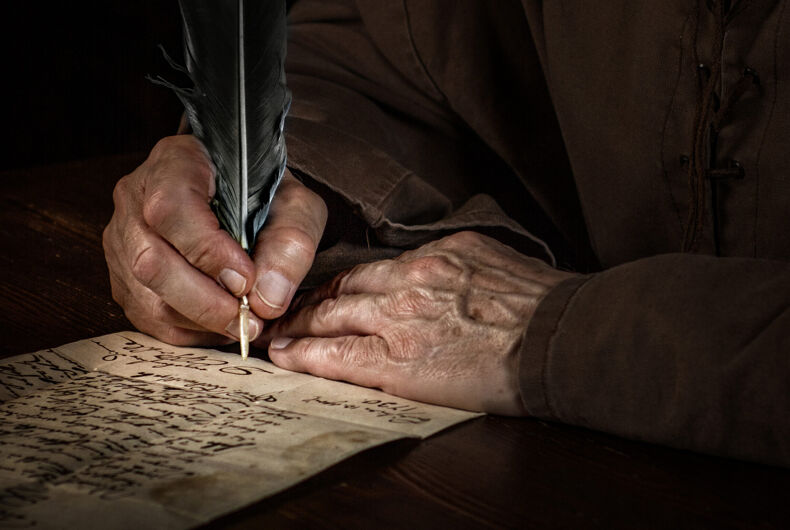 Bad. To those learning English, it’s often the first word taught as the antithesis of “good”. Frequently, it’s one of the first adjectives that one learns. It is one word that perhaps is used at least once a day among English speakers, even being used in modern times with positive context (i.e. “That’s a bad-ass outfit you have on; where did you get it?”).

Despite how ubiquitous “bad” is in our vernacular, could the word potentially have its roots in Dark Age-equivalents of homophobic slurs? Many etymologists think it can.

Related: How to be a better straight ally to LGBTQ people

With fairness, the origins of “bad” are not entirely certain (as is with any word originating from the Middle Ages or prior). According to many etymologists, however, the most likely roots of “bad” stem from bæddel or bædling, Old English words meaning “hermaphrodite” or “an effeminate man.”

It’s well-understood that LGBTQ people have been marginalized for centuries, but how exactly did a slang term used against medieval queers become perhaps the most commonly used English adjective to describe the world’s maladies?

Though LGBTQ people have existed since the dawn of mankind, the many words (and unfortunately, slurs) that we use to describe them were only coined within the last 140-or-so years. The term “homosexual” itself only originated in the early 1890s and “queer” wasn’t used in a homosexual context until the 1920s. Even the word “bad” itself was not commonly used until the 19th century (prior to then, “evil” was the far more popular adjective). Bæddel, however, according to the 1897 Century Dictionary “flourished in vulgar speech as an indefinite term of abuse” in the later Middle Ages.

It may come as a surprise then that some scholars cite that up until its later years, the Middle Ages were “a kind of queer utopia,” as Bill Burgwinkle of Cambridge University said. Burgwinkle goes on to write that “marriage practices were not yet controlled entirely either by state or church and varied widely by class and region” and that same-sex relations were frequent, especially among intellectuals.

Despite that information, it definitely should not discredit the fact that homosexuality was still very much taboo among the upper and clerical classes throughout the era. Queers of the era were relegated to concealing their sexuality and having same-sex relationships surreptitiously.

Catholicism rapidly gained traction and massive amounts of converts throughout the course of the early Middle Ages in Britain. Anyone that didn’t fit the church’s paradigm of the ideal Catholic was seen as an earthly extension of Satan. As Anatoly Liberman of Oxford University wrote, “all deviations from the average physical norm were considered ‘bad’.”

It’s important to note as well that literacy and writing capabilities were reserved for the privileged few during the Middle Ages; most frequently, those were members of the clergy. Much of the history of the Middle Ages as we understand it is shaped by primary sources written by Catholic clerics. We may not entirely understand how the common man perceived queerness, but as the church had a massive influence on people during this time, perceptions of it were likely to turn negative. Therefore, as the church grew in prominence and the clergy spread their documents and beliefs, bæddel’s use expanded.

As the centuries progressed, the initial meaning of bæddel was all but forgotten. The “æ” (pronounced “ah”) and “del” at the end of the word were eventually dropped and the word took on an entirely new, much more vague, definition.

While this isn’t to say that we should collectively once again revert to using “evil” in place of “bad”, it does provide an interesting example of how prejudice and marginalization, even when taking place centuries ago, can shape our everyday lives to the point where it becomes routine and forgotten.

Cities across the globe memorialize 49 lives lost in Pulse Massacre