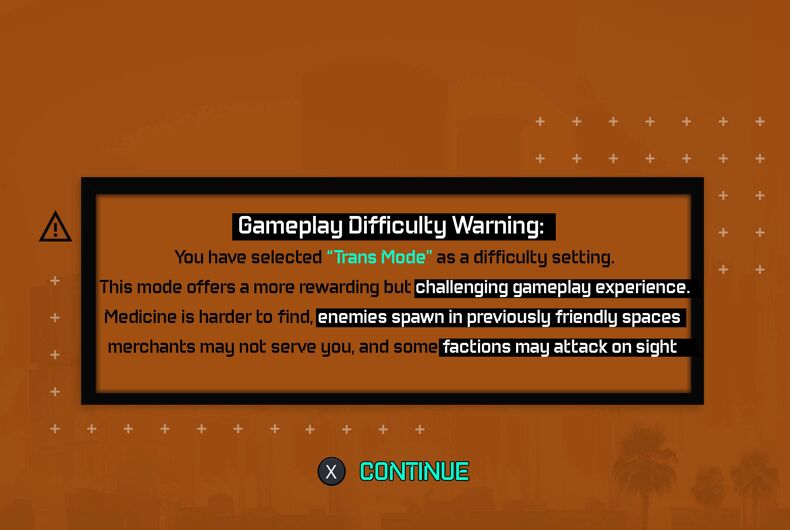 One of the great, and often overlooked, injustices faced by queer and trans people is the stereotype that we don’t have a sense of humor. (Case in point: Folks responding to Rainn Wilson’s Twitter apology by urging the actor not to apologize for a “joke.”)

But no one has better jokes about the LGBTQ experience than, well, LGBTQ people.

To those who would suggest that people transition in order to live an easier life.

WARNING: You have selected “Trans Mode” as a difficulty setting. This mode offers a more rewarding but challenging gameplay experience. Medicine is harder to find, enemies spawn in previously friendly spaces, merchants may not serve you, and some factions may attack on sight.

In response to fear-mongering about the influence of drag queens on children.

Parents need to stop subjecting kids to these drag shows where men dress up like women, play loud music, ask for money, and indoctrinate kids before they are even old enough to understand. pic.twitter.com/6EK33F6Y7Y

Trans folks know how to transmute pain into comedy.

passive aggressively sending this to my transphobic dad for father's day ^-^ pic.twitter.com/0aiN8WfbaP

Some of that comedic gold may be inspired by the common shared experience of a second puberty.

Can we get some TV shows/movies about that self-aware second coming-of-age? And no, the new Barbie movie doesn’t count.

Transgender paramedic abused and spit on