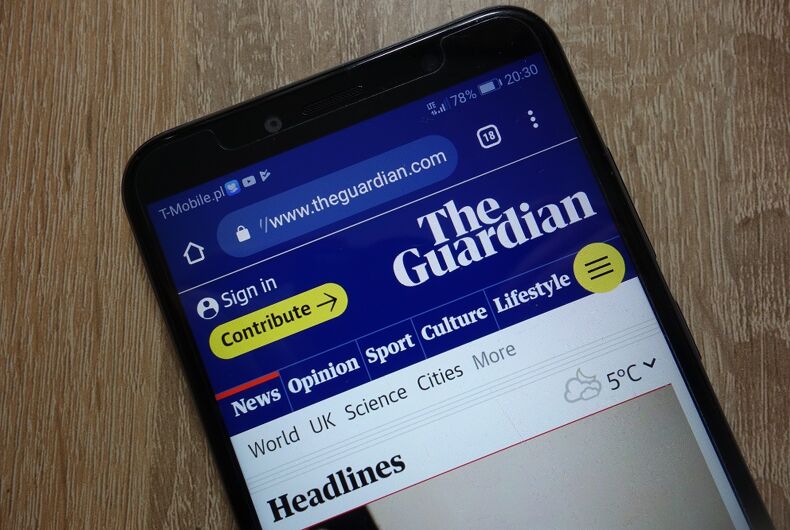 Two transgender journalists are pulling out of the Guardian’s Pride special coverage due to the paper’s alleged “ingrained prejudice against trans women.”

In a letter to the U.K. newspaper’s bosses, freelance journalists Freddy McConnell and Vic Parsons said they were declining all future work with The Guardian. They were commissioned to write pieces about their experiences of being transgender for the paper’s upcoming Pride special.

Related: Trans man is fighting to not be called “mother” on his child’s birth certificate

The pair say they have a “moral duty to stand in absolute solidarity” with transgender women and trans feminine people who are receiving negative attention from the paper, adding they will “no longer write for The Guardian until it changes its trans-hostile and exclusionary stance.”

The letter continues: “For far too long, the UK’s supposedly most progressive mainstream media outlet has routinely monstered trans women, undermined non-binary people, and misrepresented our desire to simply live in peace and safety.”

“It has amplified conspiracy theories about trans healthcare and trans and gender non-conforming children and has contributed to attempts to smear those working to support trans people. On social media, it’s even worse, with prominent writers routinely amplifying and generating misinformation about trans women, trans men, and nonbinary people.”

McConnell and Parsons say they believed a recent opinion piece was “misleading and discriminatory” about cisgender lesbians dating transgender women and said it was “the final straw” for them.

McConnell said that he was “disgusted” by the article, “I was like, oh God, here we go again. I’m still shocked that the Guardian is putting out pieces that are so obviously incorrect, inaccurate, and offensive. What is going on?”

In their letter to newspaper bosses, the writers claim the article “contravenes The Guardian’s editorial code on fairness, verification, accuracy, and discrimination,” as well as going against the paper’s “foundational values.”

“This decision was not reached quickly or easily,” they write, adding, “since 2017, trans writers, staffers, and allies have been working politely and tirelessly to help editors understand the harm that misinformed hostility to trans equality is doing, both to trans people and to the paper itself.”

“When I saw that opinion piece I was just like – why? Not again. I was sent it by multiple people and it’s exactly why I’ve had to stop reading the news for the past few months,” Parsons said. “It was impossible for me to go ahead and write something for the Pride edition, knowing that the organization had supported that article.”

The two journalists call on other writers, especially LGBTQ writers, to end their working relationships with The Guardian “until it stops attacking trans women and trans equality,” they say that all of the newspaper’s transgender staff have already left.

“The Guardian can no longer point to trans staffers as evidence of not having a transphobia problem because they’ve all left, either wholly or partly due to said transphobia,” the letter claims.

McConnell and Parsons have several demands within their letter. They want The Guardian to change how it approaches transgender people. They also ask for a change in the editorial stance to reflect that transgender women having rights does not disadvantage cisgender women.

Both writers don’t have any regrets when it comes to leaving The Guardian. When asked if leaving could lead to transgender people being silenced, or more anti-transgender negativity in the newspaper, both McConnell and Parsons said “no.”

“We’re not included in the debate at this point anyway, and certainly not by The Guardian,” Parsons said. “This is a statement against the continued exclusion of our voices from the debate – not us removing ourselves from a debate that we were included in.”

They added: “If you call yourself a trans ally, this is the moment for you to do something. Yes, it might come at a financial cost to not have a working relationship with The Guardian, as it does for me and Freddy, but sometimes you have to do what’s right.”

How to be a better straight ally to LGBTQ people