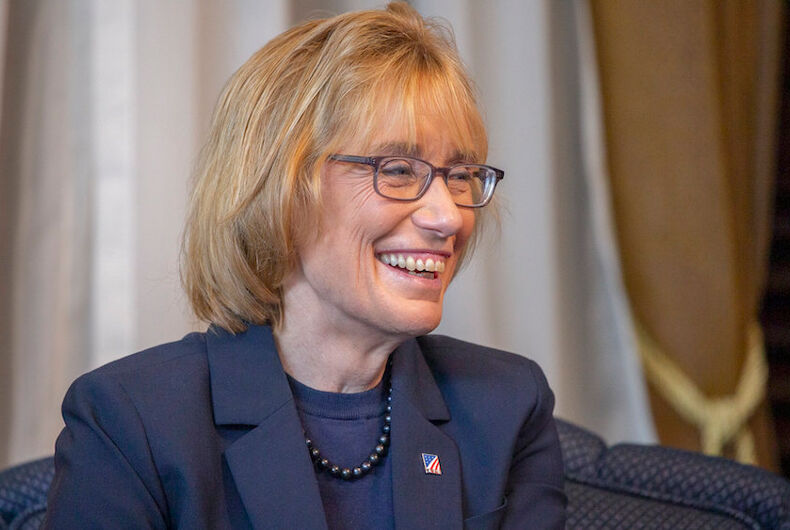 There’s no question that Democrats are facing an uphill battle holding onto their notional majority in the Senate. The party’s inability to get much done, thanks to Sen. Joe Manchin (D-WV) and Sen. Kysten Sinema (D-AZ), coupled with rising inflation, is enough to make voters itch for a change of parties. Republicans just have to pick up one Senate seat, and they will take control.

One of those seats in New Hampshire, where Sen. Maggie Hassan (D) is running for re-election. Hassan, the state’s former governor, won election in 2016 by a margin of just 1,017 votes, making her an obvious target this time out.

However, defeating Hassan means Republicans have to field a strong challenger. The best option that the GOP had, Gov. John Sununu, opted not to run. The leading candidates in the field now are distinguished primarily for their anti-LGBTQ records. (Hassan has long been a support of LGBTQ rights, issuing an executive order against transgender discrimination when she was governor.)

Kevin Smith has been bouncing around in state politics for more than 25 years, most recently as town manager of Londonderry. However, Smith’s garnered the most attention as the executive director of Cornerstone, a religious right group founded to “help defend, promote, and protect families, faith and freedom in New Hampshire.”

Cornerstone is an affiliate of Focus on the Family, one of the leading religious right groups in the nation. As might be expected, during Smith’s tenure at Cornerstone, the group promoted many of the harmful and hateful policies you’d expect, including conversion therapy.

Indeed, long before Florida Gov. Ron DeSantis (R) was pushing Don’t Say Gay, Smith was on a similar tear in New Hampshire. In 2009, he forced a local school board to remove material from high school curriculums that didn’t have “good, wholesome values,” including a book by David Sedaris.

When New Hampshire passed marriage equality, Smith predictably blew a gasket, running ads against then Gov. John Lynch (D), who signed the bill into law. Smith then led the effort to get the law repealed.

The other Republican trying to win the nomination is Chuck Morse, president of the state’s senate. Morse is more of an establishment Republican, but he clearly has his points of agreement with Smith. Morse voted four times in 2018 to oppose the use of conversion therapy on minors. He also voted against lifting the ban on same-sex parents adopting or becoming foster parents.

So far, neither Smith nor Morse have caught fire with voters. Their fundraising lags well behind Hassan’s, and they haven’t exactly distinguished themselves on the campaign trail. For a stunt on Tax Day, Morse tried to take a chain saw to a stack of tax code, but the saw wouldn’t start and he was heckled by anti-COVID mandate protesters.

There is a third candidate, retired Brigadier General Don Bolduc. Bolduc unsuccessfully ran for the GOP nomination for Senate in 2020. In that campaign, Bolduc ran a homophobic ad complaining about “liberal, socialist pansies.”

Still, sillier candidates than these three have managed to succeed before. The primary isn’t until September, and Donald Trump hasn’t weighed in with an endorsement. Predictably, he has had kind words to say about one candidate: Bolduc. Bolduc is all in on Trump’s lies about the 2020 election. Of the three candidates, he would be the fringiest by far, which could be good news for Hassan – assuming she can beat him.