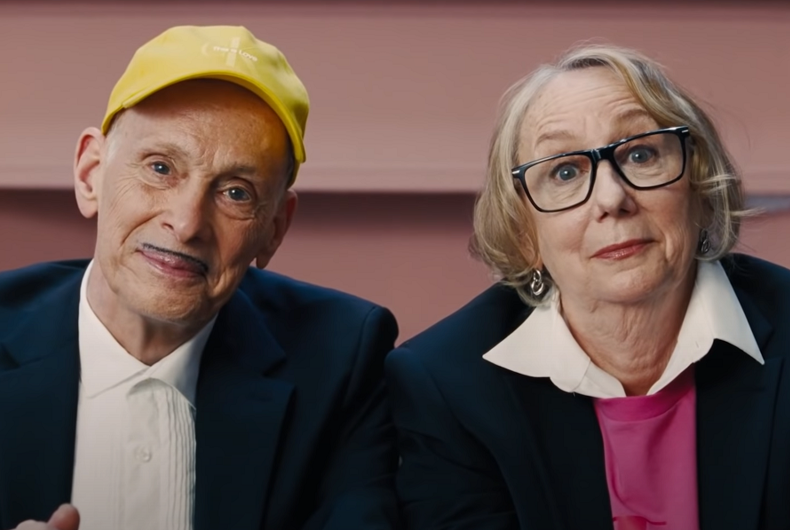 For Pride Month this year, Calvin Klein Inc. has launched a campaign that celebrates “chosen families,” in all their variations.

Instead of using professional models, the company is featuring “LGBTQIA+ trailblazers, entertainers and advocates” who represent the many different ways people love each other.

The campaign, called “This is Love,” features videos of different sets of “nontraditional” yet “unconditional” lovers, discussing their relationships. It sends a provocative yet affirming message about diversity and inclusion, while showcasing Calvin Klein’s new line of apparel, underwear, and activewear.

On May 19, Calvin Klein released eight minute-long videos that provide a glimpse of the models’ various relationships. A final video brings the models together, talking about love and family.

“’This is Love’ celebrates chosen families within the LGBTQIA+ community,” the company states on its website. “Our cast of friends, partners, lovers, neighbors, allies and more share what family means to them, highlighting the spectrum of intentional and important connections that exist with the LGBTQIA+ community.”

Styled in and out of “This is Love” apparel and other “Calvin Klein essentials,” the models are photographed with their loved ones in “quiet moments of connection, private instances of intimacy and playful expressions of their relationship,” as the website puts it. “Nontraditional, unconditional, real: this is family through the lens of Calvin Klein.”

The campaign includes still shots that evoke prints from a photo album, as well as videos. John Edmonds was the photographer. Items in the collection range from jackets, hoodies, shorts and rompers to tank tops, T-shirts, swimsuits, caps, socks, bralettes, briefs, bikinis and jock straps.

According to the company, the collection’s colors were inspired by the Progress Pride Flag. Each item includes a label that states what each color of the flag represents: black for beauty; brown for power; pink for sex; orange for healing; yellow for sunlight; tan for harmony, white for nonbinary; turquoise for magic, and blue for serenity. The Reimagined Heritage Underwear Collection incorporates bands and fabrics with swirled combinations of these colors in a nod to the “intersectionality that exists throughout the LGBTQIA+ spectrum of sexualities, gender identities and sex characteristics.”

This is the third major fashion campaign in four years for Waters, 76, who was one of the faces of Nike and Nordstrom in 2019 and a model for Saint Laurent in 2020. Waters is best known for making 16 films, including Pink Flamingos and Hairspray, and writing 10 books, including Shock Value and Role Models. Calvin Klein launched its This is Love campaign the same week Waters wound up an eight-city tour to promote his new novel, Liarmouth: A Feel-Bad Romance.

A longtime ally of the LGBTQ community, Stole, 74, has appeared in all of Waters’ feature films, going back to Roman Candles, Mondo Trasho, and Multiple Maniacs. One of the Dreamlanders, Waters’ ensemble of regular cast and crew members, she was Connie Marble in Pink Flamingos; Taffy Davenport in Female Trouble; Peggy Gravel in Desperate Living, and Dottie Hinkle in Serial Mom. Waters wrote about taking LSD with her in Provincetown when both were past the age of 70 in his book, Mr. Know-It-All, The Tarnished Wisdom of a Filth Elder.

In the video for Calvin Klein, Waters and Stole are seated on a sofa in a posh living room, talking about how they met and why they think their friendship has lasted so long.

“We met in Provincetown, which is not Baltimore, where we both lived at the same time, ‘bout 1966,” Waters recalls. “I remember Mink looking like a proper Roland Park girl but one that wanted to go bad, and she found the right person.”

“John was probably the most self-confident person I had ever known,” Stole replies.

Waters is gay. Stole, whose real name is Nancy Paine Stoll, is straight. Waters named her Mink Stole, in the same way that he gave actor Harris Glenn Milstead the name Divine. The name stuck, and so did their friendship.

“I just think that friends – a man and a woman, maybe one’s gay and one’s straight – can be the best friends forever, because there’s never jealousy about boyfriends or girlfriends,” Waters offers in a minute-long video filmed for the campaign.

“Well, there’s no sexual tension, which makes it really easy,” Stole says, adding, “I was never in love with you.”

“I was never in love with you. That’s why we bonded,” Waters responds. And yet, “This, this is love.”

“This is love,” Stole agrees.

In their videos, the other models provide additional examples of what a chosen family can be.

“The bond I have with this family is probably better than my own family,” says a member of the House of Xtravaganza. “It’s so pure… It was necessary for survival.”

Smith and Ashe broke up for five months and came back together and say they’re now happier and healthier than ever.

“We couldn’t imagine each other outside of our romantic expectations, but now we’re just like homies and talk about everything,” they said.

“We are our chosen family and we have a culture around us that’s chosen too,” said Smith of her relationship with Pony. “In a queer culture, it’s been really extremely important because a lot of people don’t have any support system. So that’s something we’re lucky to have.”

Sasha Lane is paired with someone who is both chosen family and biological family, her brother Sergio D’Arcy Lane. Both identify as gay.

“He is my blood, but he also is chosen,” she said. “I feel like I chose him from the universe.”

Besides showcasing a new fashion line, the ‘This is Love’ campaign highlights Calvin Klein’s support for the queer community.

So far in 2022, PVH states, Calvin Klein has committed $400,000 in support of non-governmental organizations fighting for LGBTQIA+ equity, advocacy, safety and justice. It’s a supporter and sponsor of The Trevor Project, the world’s largest suicide prevention and crisis intervention organization for lesbian, gay, bisexual, transgender, queer and questioning young people.

Calvin Klein also supports the International Lesbian, Gay, Bisexual, Trans and Intersex Association (ILGA), and its efforts to shape a world “where everyone can live safely, equally and free.” It supports PFLAG (formerly Parents, Families and Friends of Lesbians and Gays) and the Transgender Law Center in their efforts to advance LGBTQ education, safety, inclusion and justice. Calvin Klein Australia works with the BlaQ Aboriginal Corporation to strengthen visibility of the Aboriginal and Torres Strait Islander LGBTQ community.

Here are 5 shoes to celebrate Pride Month with in style