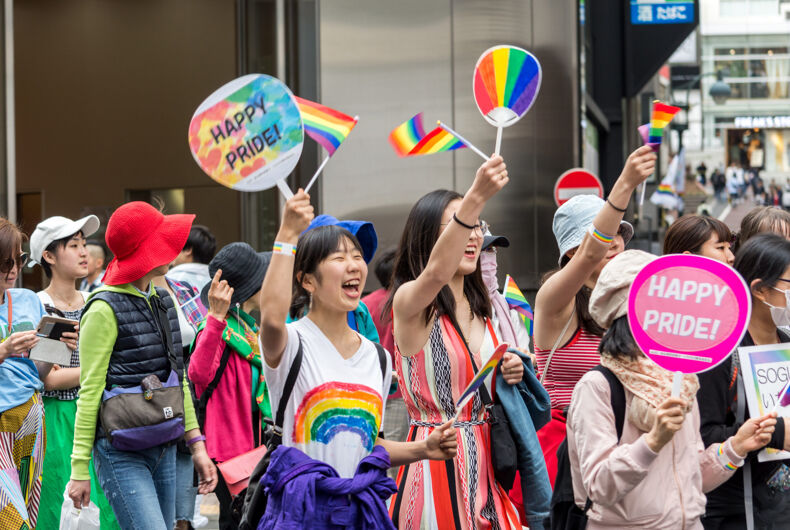 A district court in Osaka, Japan recently ruled that the country’s same-sex marriage ban is constitutional. While the ruling contradicts a March 2021 ruling by a Sapporo district court, it’s just the latest in the ongoing legal battle for LGBTQ rights in the country.

In its decision, the Osaka court ruled against a lawsuit involving three same-sex couples. The court wrote that government recognition of same-sex couples may bestow dignity on those relationships. However, the court ultimately ruled that denying such recognition doesn’t violate the country’s constitution, especially since the constitution only mentions marriage between different sexes and mentions no other legal pathway for same-sex marriage.

Article 24 of the Japanese constitution specifically states, “Marriage shall be based only on the mutual consent of both sexes and it shall be maintained through mutual cooperation with the equal rights of husband and wife as a basis.”

However, LGBTQ advocates have also pointed out that the constitution’s other articles state, “The people shall not be prevented from enjoying any of the fundamental human rights,” and, “All of the people are equal under the law and there shall be no discrimination in political, economic or social relations because of race, creed, sex, social status or family origin.”

More than 200 Japanese municipalities offer some form of recognition for same-sex couples. Such recognition can help same-sex couples rent apartments together, visit each other in city hospitals, and receive other services that married heterosexual couples enjoy.

LGBTQ advocacy groups have pushed for a national bill that would enshrine equal civil rights and non-discrimination protections into law. However, the conservative party of Prime Minister Fumio Kishida helped defeat the effort, in the lead up to last summer’s Olympic Games.

Japanese activists tell LGBTQ Nation that the fight for queer rights nationwide has stalled out in part because LGBTQ organizations are hesitant to partner with gay bars. Bars in Japan are suspiciously regarded as part of the mizu-shōbai (literally the “water trade”), the nightlife which sometimes has ties to yakuza (the Japanese mob), sex work, and other “immoral” types.

Sadly, as long as “legitimate” activists in Japan are reluctant to partner with the vibrant nightlife community, the same-sex marriage movement will have trouble getting substantial LGBTQ community and allied support.

Despite this, a 2013 study by the Pew Research Center showed that 54 percent of Japanese citizens believe that homosexuality should be socially accepted. Accordingly, 200 cities across Japan have begun offering certificates recognizing same-sex civil unions. Collectively, these municipalities represent 12 percent of the country’s total cities.