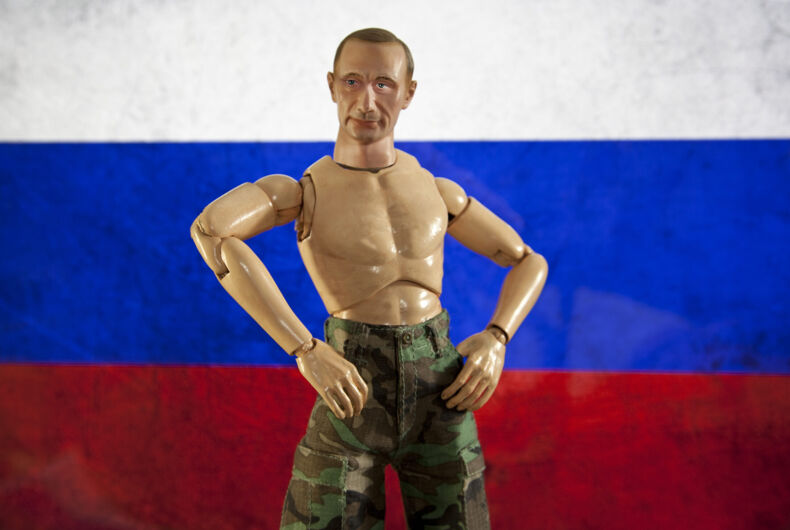 A caricature of Vladimir PutinPhoto: Shutterstock

Queerphobic Russian President Vladimir Putin called the bodies of other world leaders “disgusting” after attendees of the G7 summit reportedly mocked his infamous 2009 photo of him riding a horse while shirtless.

At the G7 summit, a gathering of leaders from the seven wealthiest countries, the leaders of the U.K. and Canada reportedly mocked Putin’s photo.

While joining other leaders at the summit’s Sunday lunch, British Prime Minister Boris Johnson reportedly asked, “Jackets on? Jackets off? Shall we take our clothes off? We have to show that we’re tougher than Putin.”

Canadian Prime Justin Trudeau replied, “We’re going to get the bare-chested horseback riding display.” His quip referred to the 2009 photo of Putin riding a horse while shirtless.

Johnson joked, “We’ve got to show them our pecs!”

@JustinTrudeau referred to Putin's infamous 2009 photo-op of himself riding shirtless on a horse#StopPutinNOW #PutinsWar #StopWar pic.twitter.com/PRjHlaxeD4

The leaders were likely joking in reference to the united show of strength that western countries have exhibited in light of Russia’s ongoing invasion of Ukraine and its numerous human rights abuses therein. Western media has suggested the necessity of decisively beating Putin in Ukraine in order to check his aggressive expansion.

Unimpressed with the joking at his expense, Putin told a reporter that “unlike him, Western leaders abuse alcohol and don’t do sports,” the Associated Press reported.

“[To look good] it’s necessary to stop abusing alcohol and other bad habits, do physical exercise and take part in sports,” Putin said. “I don’t know how they wanted to get undressed, above or below the waist. But I think it would be a disgusting sight in any case.”

While Putin took his 2009 photo to radiate confidence and masculinity, queer critics pointed out its narcissistic and homoerotic undertones, possibly as a way to undercut the queerphobia he exhibits in regularly supporting Russia’s draconian 2013 law banning “homosexual propaganda.”

Putin has since had pictures taken of himself fishing and tubing down a river shirtless. He is frequently cited as an example of toxic masculinity as he strives to prove his manliness at every opportunity.

Trudeau famously went shirtless in 2012 when he fought Canadian Conservative Sen. Patrick Brazeau in a charity boxing match. He had a slender physique and later won the boxing match after just three rounds.

Are LGBTQ Republicans similar to Jews for Hitler?