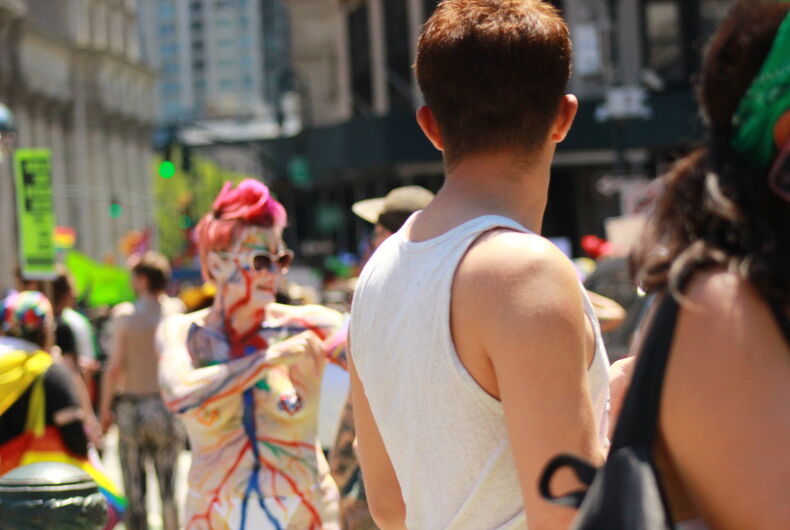 Tris Versoza marched in her first New York City Pride on Sunday. She says she shouldn’t be walking, as far as the march’s path is concerned, due to an accident that resulted in severe arthritis. However, she says it’s time for her to try; it’s time to protest.

“You can’t just hide who you are. We can’t just keep letting this happen. And even though this might not pull onto their ears, at least I’m here to say I tried,” said Versoza.

Related: The Supreme Court’s ruling on gun control will likely be used to terrorize LGBTQ people

However, it’s a decision that hasn’t left many protesters in shock this Pride.

“We’re always locked out of the narrative,” said Versoza. “In order to gain any sort of votes [politicians] have these bargaining chips like Roe v. Wade, same-sex marriage, all these things they don’t codify into law.”

Versoza is not alone in this view. Many organizers grouped in Foley Square shared similar views.

Before the march began Janis Stacey, a member of the Two-Spirit Society, gave a land acknowledgment. People gathered throughout the veins of the park to listen. “You’ve got no choice, you don’t have peace; so we have to acknowledge the native peoples of this land,” said Stacey acknowledging Lenni Lenape. “We’re still here. And we’re still fighting.”

For many, marching in the Queer Liberation March is a stance in that fight. The march formed out of protest against the more widely known NYC Pride. The Reclaim Pride Coalition organized a march four years ago without corporate sponsorship, without police, the way Pride was born—in protest.

“I’ve been protesting out here for weeks,” said Jade Funk, a protester and activist. The people knew this was coming and they’re coming for same-sex marriage next, they said.

The sweat shined on their face before they stepped onto the white hot concrete to chant once more. They yelled into the streets. The chant “No justice! No peace!” filled the air.

“I don’t think it’s a surprise in any kind of way. And the fact is, I mean, it’s really unsurprising [the Roe decision] went through because there’s no sort of leadership to oppose it,” said Marie O’Toole, an activist with Socialist Alternative—a national organization fighting in workplaces, communities, and campuses against the exploitation and injustices people face everyday. She believes there is another way forward that extends reproductive health access to all, equally.

“We really need an independent party for the working-class people to fight against [the status quo],” said O’Toole. “That’s really, I think, the major obstacle.”

Rethinking the two-party system as a more open representation of the people is what O’Toole says will create independence from the Democrats that are going to continue to let Republicans strip away people’s rights, and for many, fail to grant those rights to mass populations to begin with.

Additionally, Arab Americans, Black Americans and Latine Americans are just as, or more likely, to experience infertility as white Americans, but have increasingly less access to fertility care. This is what experts call “stratified reproduction“ or the eugenic reality of enhancing the fertility of married, high income white families, “but not the reproduction of less valued, less desirable, brown, and Black babies,” said Rosario Ceballo, a University of Michigan psychologist and associate dean, in a 2015 study still relevant today, Silent and Infertile.

O’Toole too experiences barriers to healthcare as a lower income person.

“As a working class queer person, I can’t access healthcare…. like I can’t afford access,” said O’Toole. “The only way—I used to work at Starbucks—the only way I can afford to access healthcare was through a workplace program that essentially keeps you shackled to a job.”

That’s why we have to work as one regardless of which states (New York) are access states, said O’Toole.

“The fact is, it’s going to take a massive unified, multi-gender, multi-racial fight to actually be able to make ground on any of these things,” said O’Toole.

In part of this fight, Yves, activist and self-proclaimed sibling in the fight, says joy is our greatest weapon.

“I think it takes a lot to wake up every day not knowing which rights you have are going to be taken away and still get dressed and go to work and go to the grocery store and catch the train,” said Yves in the shade canopy before the march began. “Because I feel like they want the opposite. They want us to stay and wallow in our sadness. And despair and not react, but I think they’ll win if we stop reacting.”

Yves feels that the Queer Liberation March is where family comes together. Whatever happens to his family, his community, is happening to him—a pain, an empathy that stirs a need for unity in him.

“[E]ven though these laws get passed, and these things are brought up, I think that we are still winning because we’re alive,” said Yves about what it meant to march on Sunday.

What is the MLM Pride flag?