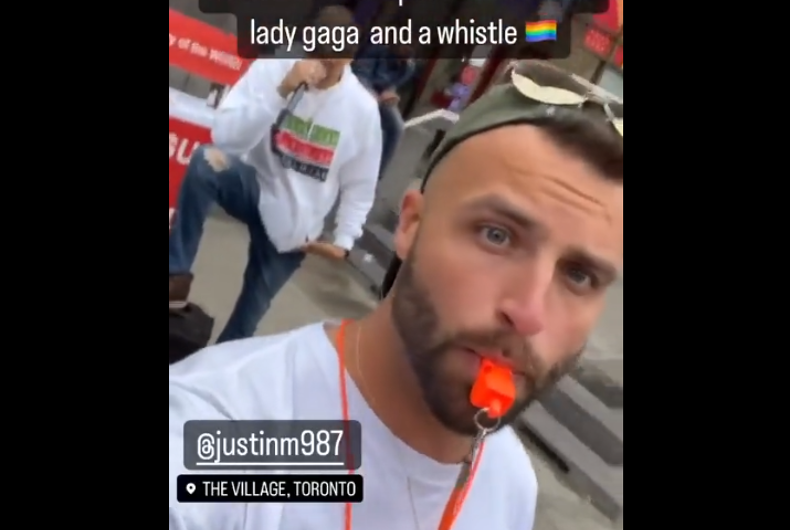 Lady Gaga once again battles homophobia. But this time, there’s a twist.

A Toronto couple drowned out a homophobic preacher who was disrupting a predominately LGBTQ neighborhood using Lady Gaga as their inspiration.

With Pride Month happening, homophobic preachers have taken to Toronto’s Village to let their hateful voices be heard. Apparently, the preachers come by every June to spew their contempt for the LGBTQ community. Luckily, people aren’t letting hate win.

In the video below, the homophobic “Christians” are shown using a portable speaker system at the corner of a popular intersection to yell about how LGBTQ people are promiscuous child molesters.

In past years, preachers like the one seen in the video have incited community members to the point where police had to intervene. However, this year, some locals took a different approach to combat the hate.

Justin M., a 33-year-old financial industry professional living in The Village for about two years, says that he and his boyfriend could hear a “homophobic Christian” preaching over a loudspeaker from their living room on Sunday.

Upon hearing that he’d be back at the same spot at 6 p.m. the next day, Justin “decided to get creative” with a response.

“I don’t know what group he was associated with but he was definitely trying to provoke,” he said of the preacher.

“Initially, he gay-bashed us for holding hands, and I initially reacted by getting in his face, and then I realized they were trying to provoke a response.”

“So we went home and got a whistle and speaker to use a non-confrontational method to fight back and it worked great,” he said, sharing video footage of 28-year-old fitness coach Sebastien Dufour whistling repeatedly to drown out the preacher.

Meanwhile, Justin says, they played some of Lady Gaga’s most-iconic tracks on a speaker, including “Rain on Me” and “Born this Way.”

A little creativity goes a long way in the fight against hate :) #PrideTO

The preacher, who was identified as a member of “The Ministry of The Word,” was perplexed by the demonstration. In a video shared on Instagram, the preacher laughs uncomfortably and says something including the phrases “because they’ve been hurt” and “maybe they didn’t have a dad growing up.”

In another video, he says something that “leads to homosexual tendencies” and “but the bible says God can heal these people.”

These preachers may be hateful but these Toronto men prove that a little bit of creativity can go a long way when combatting hate.

“I would love if more people participated in a fun non-confrontational way so the city can show its support for the community,” said Justin. Or better still, “I would like to see something done about people being able to set up speakers on corners and preach hateful rhetoric… it was very directly attacking people walking by.

“While we accept that their religious beliefs do not align with our values that doesn’t give them the right to attack us,” he said of the preachers. “Respect goes both ways and our community will always come together to drown out the hateful voices of the few.”

GOP Senate candidate Adam Laxalt has been attacking LGBTQ equality for years. He could win.

Rebel Wilson comes out during pride month: I found my ‘Disney Princess’