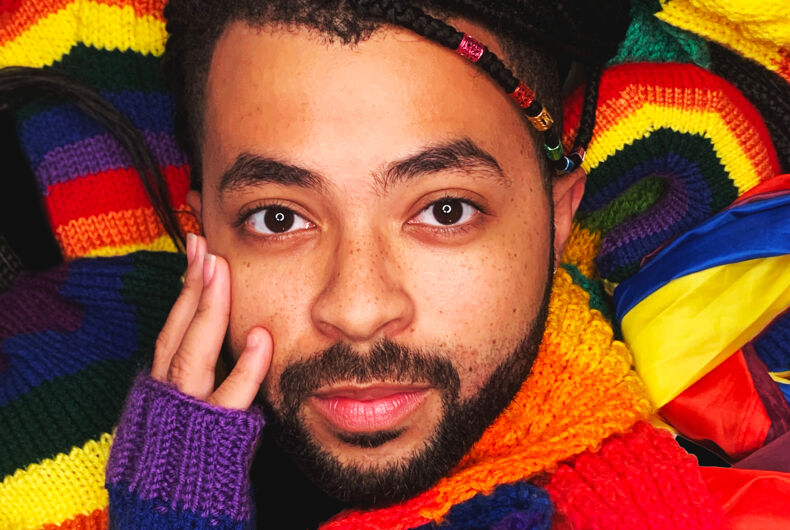 For Knit the Rainbow‘s founder, Austin Rivers, growing up with younger siblings and being surrounded by LGBTQ friends drove his mission to help homeless youth in New York City.

“I am the oldest of eight siblings, so I’ve always been surrounded by younger children,” Rivers told LGBTQ Nation. “Being around so many youths was consistently on my mind in how families work outside my own. When I came out, I was supported by my parents and family, but I knew of friends who weren’t supported and were kicked out of their homes.”

When Rivers started looking at the statistics of how many LGBTQ youths are left homeless when they come out, especially Black and brown queer people, he knew he needed to help. His solution was Knit the Rainbow.

“Knit the Rainbow is a nonprofit organization that works to empower and protect homeless LGBTQ youth in New York City and beyond by providing them with handmade knit and crochet winter clothing and accessories,” Rivers explained.

This Pride Month, Knit the Rainbow is partnering with Lion Brand Yarn, one of the leading knitting and craft yarn distributors in the U.S., to help expand its reach to more homeless youth.

“Partnering with Lion Brand Yarn was a no-brainer. They offer a level of support and materials that we never expected to receive,” Rivers gushed. “Because of them, we’re able to have yarn and supplies readily available now instead of relying solely on what is sent by volunteers.”

The company is amplifying Knit the Rainbow’s mission during Pride Month by sponsoring their PrideFest booth at New York City’s Pride celebration; however, their support lasts all year.

To achieve a year-round partnership, Lion Brand is offering “Knit the Rainbow” kits, with a portion of sales benefitting the organization. They also have a social media campaign planned to attract volunteers and supporters on their Facebook and Instagram accounts. Lion Brand has nearly a million followers over the two platforms.

“Lion Brand plans to develop additional products to benefit Knit the Rainbow and will take part in action days tailored to the LGBTQ community, including trans, non-binary and BIPOC folks. These action days are designed to educate community members and allies on everything from crafting to housing issues,” Jessica Zappulla, Lion Brand’s Design Director, added.

Zappulla didn’t mince words about why Knit the Rainbow was such a great fit for Pride.

“In New York City alone, the number of homeless LGBTQ youth exceeds 8,000, accounting for at least 40% of the city’s homeless youth population. In the U.S. at large, that number skyrockets to more than 550,000. Our organization has collected over 7,700 handmade garments from volunteers in over 35 states and three countries. These garments have been hand-delivered to 7,400 LGBTQ homeless young people throughout the city,” Rivers shared.

They also cautioned that support for queer youth cannot stop at Pride month. Like Lion Brand’s support, it has to be nonstop if it’s going to succeed.

“LGBTQ people still struggle and live outside the month of June. Most of our work happens outside of Pride Month. June is our time to share and amplify our message, but homeless youths suffer throughout the year, especially during the winter.”

There’s a lot that Rivers says the community could do year-round to help.

“For any change, we need more voices of support and education to make a difference in our community. Staying educated on how many LGBTQ youths are homeless is important, and there are so many solutions. We need to be supporting those initiatives as much as we can by either volunteering or providing monetary donations.”

“Our next goal is to spread our work to Chicago. We want to make this a sustainable effort for LGBTQ youth across the country. That includes knitting and crochet classes to interact with the homeless population while also providing them with valuable skills. I also want to expand our ‘Knit the Future’ Diversity & Inclusion program,” Rivers shared.

Rivers’ lofty ambitions are proof he will never sell himself or his work short. He is committed to making a better future for kids nationwide while making his younger self proud.