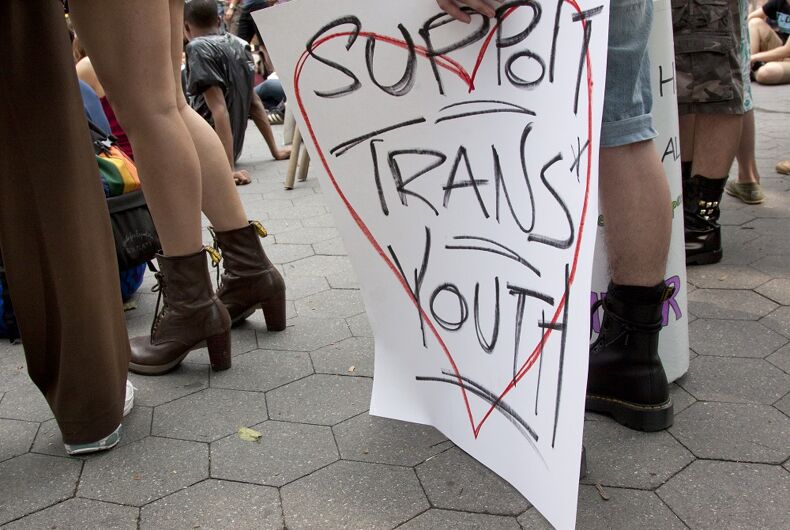 A supporter holds a sign that says "Support Trans Youth" in Washington Square Park on the 8th Annual Trans Day of Action on June 22, 2012 in New York City. Photo: Shutts

Students at a Washington state high school Monday staged a walk-out in solidarity with a trans student, who was beaten in the school’s hallways the week before.

The walk-out prompted a threat by another student “to aim a machine gun” at the rallying students, according to Kalama police. The Kalama Middle and High Schools, which share a campus, were put into lockdown.

Last week, a transgender student was assaulted in the school’s halls just as students were leaving for the day.

Witnesses say another student repeatedly kicked the transgender student, who is a boy, with steel-toe boots, while yelling homophobic and transphobic slurs.

“The student had been on the ground, begging him to stop and he just kept going,” said Katrina Rick-Mertens, a sophomore at the school and rally organizer.

The victim was subsequently treated in hospital and has returned to class, according to the school district.

Students at a WA high school led a walkout in support of a transgender classmate after he was violently assaulted in the school hallway. Shortly afterwards, the entire school district was locked down by threats targeting students who led the walkout. https://t.co/5GHQQpRMS4

At Monday’s walkout, the boy threatening “to aim a machine gun” at protesters made the comment to another student not affiliated with the protest. That student, who says he didn’t see a gun,  reported the comments to school officials.

Police say they located the student and took him into custody.

The attack, walkout, and subsequent threats followed reported inaction by the school against what students say is the growing influence of hate groups. Students have posted Nazi imagery in the school, which is just across the state border from Portland, and on social media.

According to parent Melissa Cierley, bullying at the high school is endemic.

“There’s a certain population that seems to be able to get away with whatever they want,” she said. 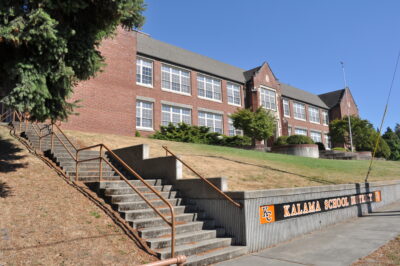 Her daughter Lillie says she’s been the victim of sexually harassing insults and threats, and things thrown at her like books, staplers, or “anything they can get their hands on.”

Cierley and Rick-Martens say while they tell school administrators about the bullying, they’re never told about anything being done about the incidents, only to see the bullying continue.

“You’d think that after so many students go to them about hate speech and going to them that we need these bullies to stop, that they would do something. We shouldn’t have to come to this point to rally together for them to listen to us,” Rick-Mertens said.

“If students are saying that they feel like this, they feel like there is a problem, then there is truth to that,” Kalama School District Communications Manager Nick Shanmac said. “As a school, as a district, we need to be listening.”

Rick-Mertens  posted on Instagram after the rally: “Remember, staying silent only helps the oppressor and never the victim. Use your voice for good.”