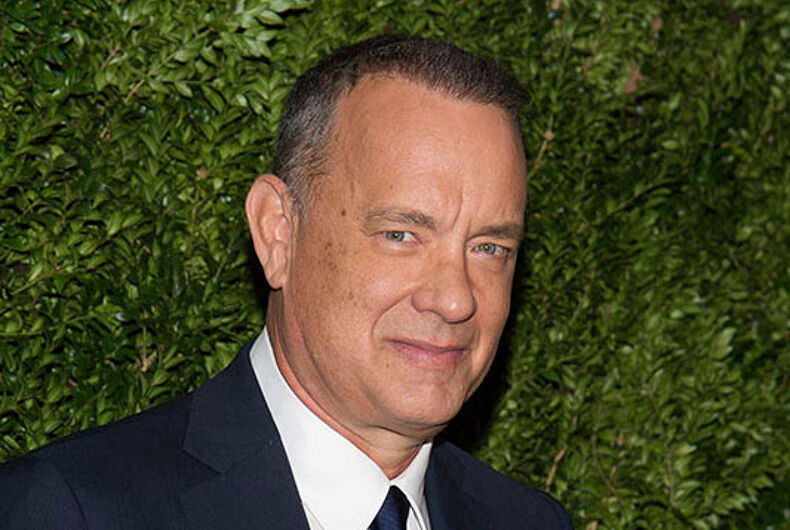 In a new interview published in The New York Times Magazine, the Academy Award-winning actor was discussing shifting cultural attitudes as they relate to some of his previous work, including his role in Philadelphia.

Related: America’s Dad Tom Hanks wants you to know: ‘We are going to be all right’

In that acclaimed 1993 film, directed by the late Jonathan Demme, Hanks played a gay corporate lawyer who successfully sues his former law firm for firing him for being HIV-positive. Hanks won his first Oscar for the role in 1994.

But in the Times interview, the beloved actor, who stars in Baz Luhrmann’s new biopic Elvis, agrees with journalist David Marchese’s suggestion that there’s no way a straight actor would be cast as the lead in Philadelphia today.

“‘Could a straight man do what I did in Philadelphia now?’ No, and rightly so,” Hanks says.

He goes on to suggest that the film’s success was due, in part, to his participation, which may have put viewers at ease.

“The whole point of Philadelphia was don’t be afraid,” he explains. “One of the reasons people weren’t afraid of that movie is that I was playing a gay man.”

He also expresses his belief that Hollywood has changed for the better in terms of authentic representation of LGBTQ characters. “We’re beyond that now,” he continues, “and I don’t think people would accept the inauthenticity of a straight guy playing a gay guy. It’s not a crime, it’s not boohoo, that someone would say we are going to demand more of a movie in the modern realm of authenticity.”

Hanks’s view might be overly optimistic. While out actors are certainly far more visible now than they were in the 90s, the majority of their opportunities tend to be in supporting roles and on television. Heterosexual actors are still routinely cast in the kind of leading queer roles that win major awards, like Hanks’s in Philadelphia.

Last week, photos emerged of Bradley Cooper on the set of his upcoming biopic Maestro, in which he will play Leonard Bernstein. Benedict Cumberbatch and Kodi Smit-McPhee both received Oscar nominations for their queer roles in last year’s The Power of the Dog. Mahershala Ali, Timothée Chalamet, and Rami Malek have all received nominations for playing gay or queer characters in recent years, while Colin Firth and Stanley Tucci received acclaim for their performances as a gay couple in 2020’s indie drama Supernova.

How to get smarter & fight harder for LGBTQ rights