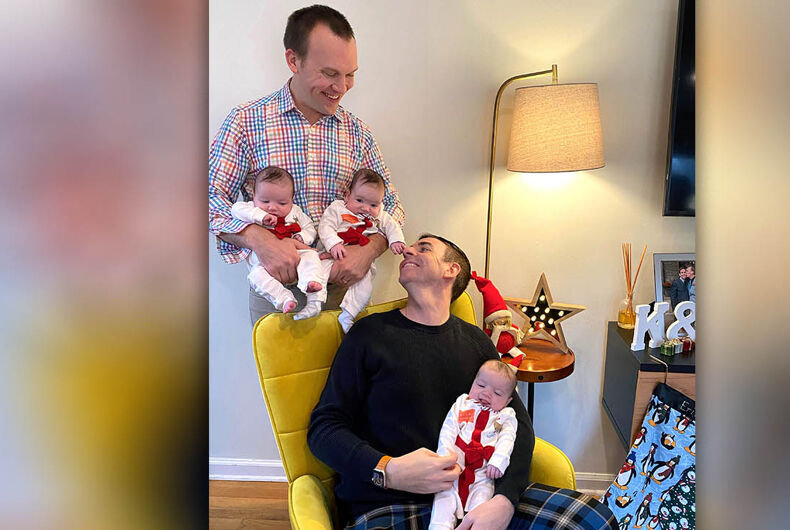 A gay couple from Ann Arbor, Michigan is adjusting to fatherhood times three after the birth of their three identical daughters, a one-in-a-million rarity.

Eric Portenga and Kevin O’Neill welcomed the girls in September. The couple conceived the kids with a donor egg and they were brought to term with a surrogate.

Related: States may make it harder for LGBTQ people to start families if the Supreme Court overturns Roe

Just before the first ultrasound, “Eric jokingly said, ‘Imagine it’s twins’,” recalls Kevin. “And I was like, ‘It’s not, because the chances of being twins are less than 5%.’ And then, yep, identical twins.”

At a second ultrasound six weeks later, the doctor asked, “Are you guys sitting down?”

“There’s something else here.”

The one fertilized egg had split multiple times, resulting in an extremely rare set of identical triplets.

“I remember saying, ‘Do we really have triplets?’” says Eric. “Do we have to get a new car?”

Eric and Kevin met their surrogate, Maureen Farris, a school teacher and mother of a 5-year-old son, through a mutual friend. She and her husband, Jeremiah Currier, had decided not to have any more children, but she “loved being pregnant” and was considering becoming a surrogate for another couple.

“Children are my heart and my passion,” says Farris, who the triplets know as Auntie Mo. “When I realized maybe I could help another family, I decided surrogacy was a route I’d be interested in taking.”

Farris gave birth at 35 weeks at Cleveland Clinic Akron General, with Eric and Kevin in the delivery room.

“Maureen is on the table, just chatting away to us,” recalled Eric. “And she asked one of the doctors at one point, ‘Have you started yet?’ Then, it all happened so quickly and the girls all came out. And then there was just a blur of blue scrubs surrounding us. It was so fast-paced and well-organized.”

Approximately 3,100 triplets were born in 2019, says Stephen Bacak, DO, a maternal fetal medicine specialist, who delivered the triplets.

The daughters were named Parker, Robin, and Sylvie, and weighed in at 4 pounds, 14 ounces, 11 ounces, and 8 ounces, respectively. They spent 18 days in the neonatal intensive care unit before heading home.

Michigan native Portenga met O’Neill in his native Scotland in 2011, when Portenga was pursuing a doctoral degree in earth science. They married five years later, living in Scotland before jobs brought the couple to Michigan.

O’Neill is the chief administrator for women’s and gender studies at the University of Michigan and Portenga is an assistant professor of earth surface processes at Eastern Michigan University.

“We wanted to be dads and that was a cornerstone of our relationship,” said O’Neill, who became a naturalized U.S. citizen in early 2020. O’Neill maintains his UK citizenship, and the girls will enjoy dual nationalities.

O’Neill and Portenga declined to say whose sperm was used at conception, but said they plan to tell their daughters.

While the birth of triplets is extraordinarily unusual, O’Neill and Portenga’s blessing comes just months after another gay couple, Jake and Sean Taylor-Baumann of Salt Lake City, welcomed their own set of three kids.

The former-Mormon TikTok couple has racked millions of views documenting their surrogacy and the challenges of fatherhood.

“There’s really nothing that prepares you for this experience,” Jake says. “We told ourselves we knew this would be hard, but it’s definitely harder than we even imagined.”