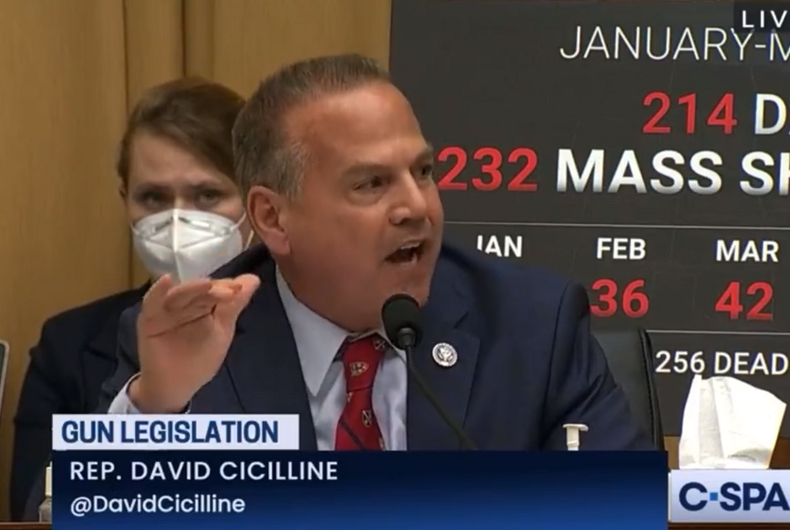 Out Rep. David Cicilline (D-RI) is getting celebrated online for his righteous anger about how some politicians don’t want to do anything to prevent school shootings like the one that occurred in Uvalde, Texas last week that left 19 children and two adults dead as even police appear to have been afraid to confront the shooter.

He was speaking yesterday at a House Judiciary Committee hearing on H.R. 7910, the “Protecting Our Kids Act,” which would enact several gun regulations like raising the age limit for semiautomatic rifles, make firearms more easily traced, and encourage safe storage of firearms.

“So spare me the bulls**t about constitutional rights-” Cicilline said as another Congressmember asked him to yield time.

Cicilline: You know who didn’t have constitutional right to life respected? The kids at Parkland and Sandy Hook and Uvalde… so spare me the bullshit pic.twitter.com/xji3Cv7lFr

The committee voted to advance the bill in a 25-19 vote, with all Democrats voting for it and all Republicans voting against it.

Cicilline was expressing a frustration that is clearly shared by many Americans, as video of his remarks have already been viewed almost 700,000 times on Twitter alone. And he got supportive responses.

“And I’m not going to yield for my entire five minutes so don’t ask again.”

This is righteous anger. https://t.co/MGNpmptKp5

Thank you Congressman Cicilline! We NEED more of this if we ever going to #EndGunViolence https://t.co/N86VvLbSPt

It’s great to see Democrats fired up. This is the righteous anger we need. https://t.co/kv2uC4RyVb

"No, I damn well won’t yield" should be the Democrats' rallying cry.

“So spare me the bullshit”! I want that on a T-shirt!

We all have a right to live without the fear of being shot in public spaces. THAT IS A RIGHT THAT FAR, FAR OUTWEIGHS AN 18 YEAR OLDS RIGHT TO A GUN. End of story.

Hey Democrats! Y’know those game walkthroughs that tell you how to beat the hard parts?

Cicilline just gave you one for the republicans.

OH, HEAVENS HE USED A PROFANITY! FETCH ME MY FAINTING CHAIR!!!

They ask him to yield because they know he is destroying their bullshit argument.

These are the people Dems need to embrace. I want those who are no longer polite in hopes of turning a red voter into a blue voter that's a pipe dream. Stop pandering and go at them.

Cicilline makes me proud to have come from Rhode Island. Whitehouse, too.