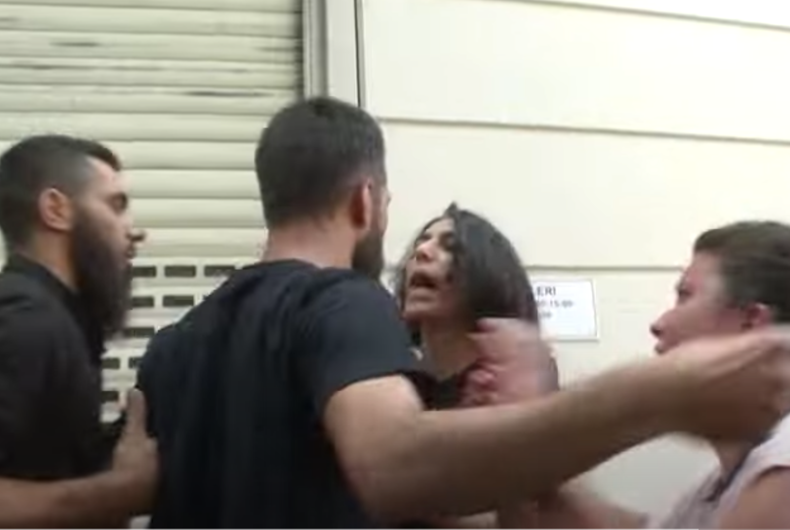 In Istanbul Sunday, Turkish police arrested hundreds of marchers, protesters and bystanders in and around Taksim Square, where LGBTQ people had gathered to begin a Pride march banned by the local governor.

Pride march has been banned every year since 2015.

In one clip, a group of young provocateurs dressed in black can be seen literally pushing their fundamentalist message on LGBTQ members of the community.

Scenes from Istanbul for @AFP:https://t.co/YcDeqjV6D9

Kaos GL, one of the largest LGBTQ rights groups in Turkey, said the arrests started prior to the intended 5 p.m. march start. Metro services had been shut down for several hours by authorities in an effort stem the flow of supporters into central Istanbul.

Riot police then began entering bars and other local venues, according to witnesses, arresting people “at random.”

My photojournalist friend Bülent Kılıç has been taken into police custody while covering the #İstanbulPride. His hands were cuffed behind his back.@Kilicbil Kilicbil pic.twitter.com/sDYNoVe13L #journalismnotcrime

'Police attacked İstanbul LGBTI+ Pride March this year as well. (…) LGBTI+s marched to Cihangir by crossing over police attack. 373 LGBTI+ activists were detained and they were released after a night at custody.’ #IstanbulPride🏳️‍🌈https://t.co/E7LbKdClHD

Turkish police broke up the crowd gathered for the Pride march in Istanbul, arresting dozens, including journalists. Even before the rally began, riot police raided several bars in the Cihangir district near Taksim and arrested people "at random"https://t.co/ek9ky74kAq

While authorities attempted to stop anyone filming the arrests, video of the crackdown soon appeared across social media, provoking outrage.

#Turkey, once again the police uses excessive force on the peaceful participants of #IstanbulPride pic.twitter.com/724vsaL2bp

4/. “The rainbow is not a crime. “Discrimination is a crime!”

The march was officially banned earlier in the week under Turkey’s Law on Demonstrations and Public Meetings.

“We have obtained information that between 21 June 2022 (Tuesday) and 23 June 2022 (Thursday) gatherings, press releases, marches, distribution of leaflets, etc are planned to be held within the scope of the 30th ‘Istanbul LGBTI+ Pride Week,” the governor’s office said in a statement shutting down the event.

The Istanbul LGBTQ+ Pride Week Committee called that decision “illegal,” saying they would use “our rights [to] make the necessary objections.”

Although Pride celebrations have been banned in Istanbul since 2015, large crowds have gathered annually in support of LGBTQ rights.

France24 reported local residents showed solidarity with the protesters, banging pans from their windows and balconies.

“We do not give up,” said Kaos GL, the Turkish LGBTQ rights group. “We are not afraid.”

#Turkey: A reporter for Agence France Presse was arrested for defying police orders not to film at Istanbul #Pride, which the authorities had tried to prevent by a banning order and closing the Metro stations.https://t.co/RbmMMPMMzi pic.twitter.com/GeQybB3Hav