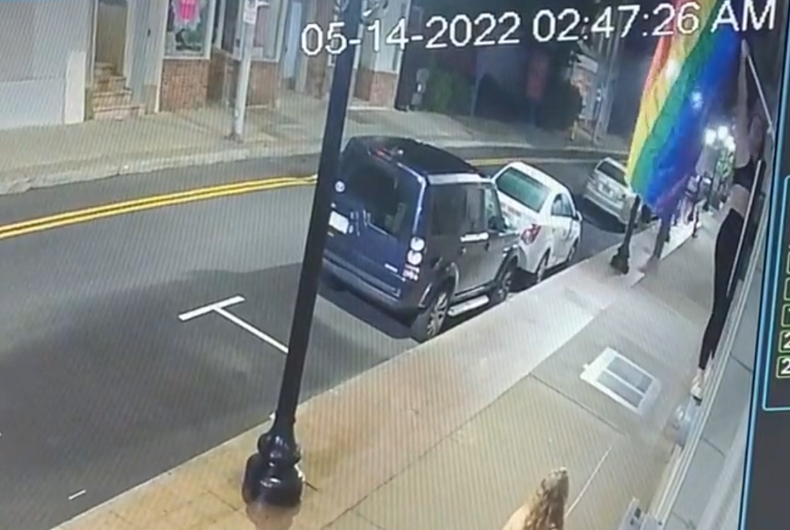 The suspect stealing the flagPhoto: Screenshot

A restaurant is looking for a white woman who was wearing yoga pants and a sports bra who stole their rainbow flag as five other people looked on.

The Blue Orchid is a restaurant in New Haven, Connecticut owned by husbands Natthawut Tipjak and Michael Flora and this is the third time that their rainbow flag has been stolen. But this time, they caught the thieves on video.

Related: Doctor smacks down GOP Congressman who tried to troll her by asking “What’s a woman” in a hearing

In the video, a group of young adults approach the restaurant at around 2:45 a.m. on Saturday, May 14. One person in the group climbed up on a windowsill to take the rainbow flag and spends a couple of minutes trying to take it down.

She is eventually successful, and she give it to another person in the group as they walk away. At no point does there seem to be any dispute about whether they should be stealing a symbol of LGBTQ pride.

Flora said that he saw that the flag was missing later that Saturday morning.

“I thought, ‘Not again,'” he told the Stamford Advocate. “It didn’t even make it a week.”

“When I saw the video I was absolutely shocked because of… how many people were there and didn’t see anything wrong with it,” he continued. “It was a group of six people and no one thought” that they shouldn’t steal the flag.

“The Pride flag did not even make it a week,” the couple wrote in an Instagram post. “Can someone tell me how our flag is affecting anyone. If you don’t like it then don’t look at it.”

Flora said that the first time their flag was stolen was last fall. The second time was just a week before the latest theft.

They didn’t report the first two thefts to the police, but now they did. A police report states that they believe six white people ages 18-25 were involved.

They posted the video to social media to try to identify the thieves. No one has been able to identify them so far, but they have gotten community support. Some customers gave them a new flag and smaller flags to give away.

Others are speaking out.

“This incident is indicative of a larger wave of hate that is brewing both nationally and locally,” said Pride Center Director Patrick Dunn. “While these young folks may think it was a harmless joke, the trauma of this is very real for the small-business owners and community members it affects.”

Police, though, said they are not investigating the theft as a hate crime because “the subjects did not appear to degrade, disrespect or make any hateful actions or gestures toward the flag.”