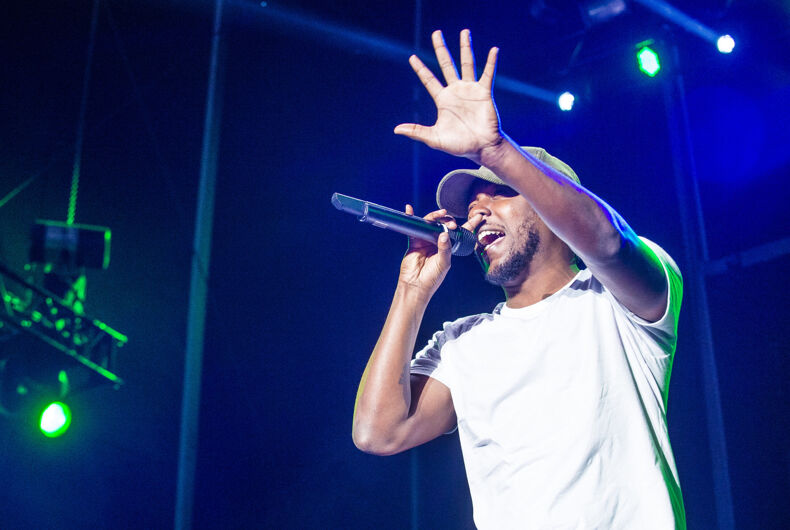 Pulitzer Prize-winning rapper Kendrick Lamar is making waves with the track “Auntie Diaries” off his recently released album Mr. Morale & the Big Steppers for speaking about his personal journey to understand and accept his transgender relatives.

But there’s little consensus about whether the song, which includes multiple references to “faggot,” and uses the wrong names and pronouns for Lamar’s trans family members, is a sign of progress.

The song includes the following lyrics:

“My auntie is a man now / I think I’m old enough to understand now / Drinking Paul Masson with her hat turned backwards / Back when it was comedic relief to say ‘faggot’ / faggot, faggot, faggot, we ain’t know no better / Elementary kids with no filter, however / My auntie became a man and I took pride in it / She wasn’t gay, she ate pussy, and that was the difference / That’s what I told my friends in second grade / She picking me up from school, they stare at her in the face.”

Raquel Willis expressed her disappointment, asking: “Why must you always push a boundary with us and expect us to be grateful?”

I just be tired of cishet men thinking they can make their own rules around how to engage queer and trans folks. No, baby. You claim to want to be better, well engage us how we tell you. Why must you always push a boundary with us and expect us to be grateful?

Preston Mitchum acknowledged that he was thrown off by Lamar’s use of the “f-word,” but pointed out that the rapper seemed to demonstrate self-awareness about why it’s not his word to use.

Just listened to Kendrick's "Auntie Diaries." I want to reflect. I'm thankful he spoke in favor of love & acceptance of trans sibs — even after admitting what society did to them first. The "faggot" threw me off because it isn't his word to use. But that's his point at the end.

The song ends with a comparison between anti-gay and anti-Black slurs, and who gets to use them.

“I said them F-bombs, I ain’t know any better / Mistakenly I didn’t think you’d know any different / See, I was taught words was nothing more than a sound / If everything was pronounced without any intentions / If every second you challenge the shit I was kicking / Reminded me about a show I did out the city / That time I brung a fan on stage to rap / But disapproved the word that she couldn’t say with me / You said “Kendrick, ain’t no room for contradiction / To truly understand love, switch position / ‘Faggot, faggot, faggot,’ we can say it together / But only if you let a white girl say ‘Nigga'”
Others broke the song down line by line to analyze how the lyrics reflect different points in Lamar’s young life, and shouldn’t be taken as an indication of where he’s at now.

Kendrick Lamar's "Auntie Diaries" off #MrMoraleAndTheBigSteppers is an incredible song about trans acceptance & intersectionality but a lot of people are hung up on some of its problematic elements. Here's a thread attempting to clear up the confusion. 💜🧵 1/x pic.twitter.com/N1UgZFviEV

The debate over the impact of “Auntie Diaries” serves as a reminder of just how low the bar can be for LGBTQ allyship and how complicated it can be to commend progress that feels insufficient. But it also seems like a symbol for where we are at right now in the struggle for LGBTQ rights.

Other examples of news giving “Are we supposed to be grateful for this?” include the recent ruling in Texas.

I think this is the best short summary of where we are in Texas. Most of the reporting is terrible.

BUT, bottom line, DFPS should not investigate anyone based on Abbott order and if they do, they will be blocked based on clear reasoning from every court that it causes harm. https://t.co/MetV52ZWCK

The good news: The Texas Department of Family and Protective Services is not bound by the actions of the governor and attorney general regarding investigating gender-affirming care as child abuse. The bad news: The judge didn’t say they couldn’t follow that guidance, except with regard to the litigating parties.

Many families with the means are still preparing to flee. (Bad news.)

Good morning. Trans kids and their families are currently fleeing parts of the US where affirming care has been made illegal.

Those who are able to do so, anyway. Many are not.

But some states are working to enact legislation to support families seeking refuge from transphobia. (Good news.)

Trans Floridians: I need you to know that there still lots of people fighting for you here. @micheleforfl and @ShevrinJones have been two of our greatest advocates and warriors in the FL Legislature.

As long as people are willing to fight by our side, there is hope! https://t.co/JIC1m0dhFx

With all the recent anti-LGBTQ legislation at the state level, many folks are preparing to take a more critical look at companies slapping rainbows on their logos in honor of Pride season.

Pride season approaches! REMINDER: It doesn't matter what you slap a 🏳️‍🌈 on, if you have a DEI team or Pride ERG or 100% on @HRC Corporate Index – if your company bankrolls politicians undermining LGBTQ rights, please know that @JuddLegum is taking note😘 https://t.co/vF4KqcHOjG