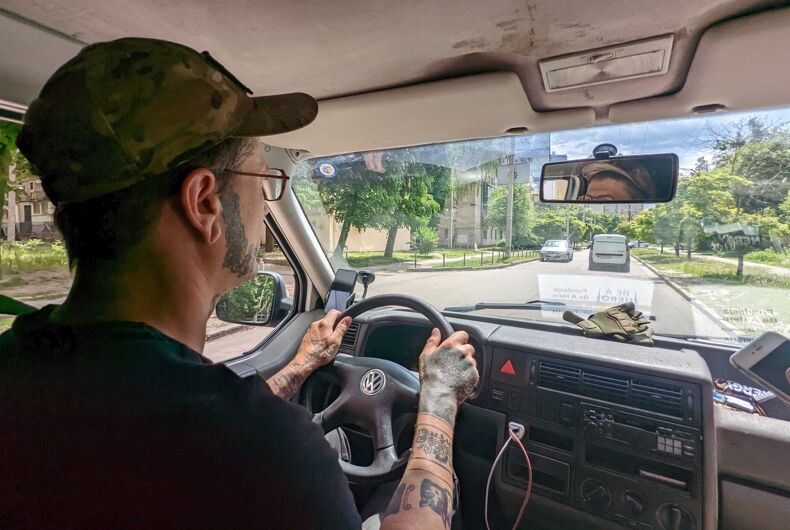 A pair of vans, cosmetically weathered but carrying an unmeasurable amount of personality along with over 12,000 lbs of food, medicine, and hygiene supplies, were used by a motley group of heroes to deliver critical supplies to two towns still under attack in northeast Ukraine.

Agatha Williams, a metal fabricator from Denver, Colorado turned front-line aid worker aiding civilians amid the Russian invasion, joined the relief effort for the first time. Piloting one of the vehicles, Williams, who goes by the pronouns they/them and identifies as queer, left the United States for the first time to make a difference in the lives of those suffering through the daily horrors of war.

Members of the self-styled Renegade Relief Runners, 3XR for short, have been driving those vehicles across the war-ravaged countryside for the better part of two months, providing humanitarian aid in places that few international groups know exist.

On a recent trip to Zolochiv, which has a population of about 45,000 when counting the surrounding villages, the 3XR team rolled in, making their second trip in two weeks to the local administrative center.

With tattoos running down the sides of their face, and stretched holes where gauges once sat in their ears, Williams cuts a striking figure, especially among the usually staid Ukrainian populace. On the day of the delivery to Zolochiv, they and their fellow members of the 3XR were given a heartfelt welcome by the town’s vice mayor. After offloading the first 4,000 pounds of food to residents dealing with the worst kind of food insecurity, Williams and the crew moved on to the local hospital.

After taking an in-depth tour around the destroyed medical complex, the chief doctor asked Williams and another 3XR member, Ken Brady from Oregon, to inspect the hospital’s generator system. As the sounds of artillery explosions thundered in the air above them, they tried to figure out why the generator was emitting diesel fumes.

Seeing how well they worked together, how did Brady think his openly LGBTQ associate was being received in the seemingly conservative nation?

“I admit some trepidation myself, about being out of place as a snarky, tattooed Asian-American, but together we have experienced zero prejudice that I’m aware of,” Brady responded.

He continued, “Ukraine needs and appreciates all help, and each of us is here to provide exactly that. In addition to Agatha, many of my LGBTQ friends at home will be equally surprised and, I hope encouraged, by the presence of a transgender reporter asking this question. Traveling to some of the hardest hit areas with members of the queer community has shown me Ukraine is not messing around, and that help is welcomed despite identity.”

On 3XR’s second day of deliveries, the mission took them west to Parkhomivka. This time more than 8,000 pounds were offloaded under the guidance of the town’s relief coordinator while the mayor came by to express his appreciation for the group’s lifesaving work.

Again, Williams was in the middle of the action.

While directing logistics, and bringing comfort to those around them, William’s body language expressed the clear sentiment of feeling ill at ease in the role of hero. Yet their teammates were full of praise for them.

Drew Luhowy, the 3XR’s resident Canadian, observed, “The collective diversity of those who came here to Ukraine to help push back against Russia has been strengthened because we found each other as a team, and thanks to our individual identities, we’ve been able to accomplish much of what we’ve set out to do so far.”

3XR’s Chris Tiller, an airline pilot from Nashville, Tennessee, who has been in Ukraine since early April and was the initial member of the Renegade Relief Runners, spoke directly to the challenges facing Williams on their mission.

“As soon as Agatha made their concerns known as to what adverse impact their identity could have on us in a country such as Ukraine that is thought of as conservative, we made it known, that not only would they never face repercussions for living their truth when we were together, we’d take 100% of Agatha if given the chance.”

“I don’t think my identity played a role in me coming here. It was more a product of how I grew up, in foster care,’ Williams said after everything was handed out and prior to departing Kharkiv with the others. “I’ve identified as queer, and have been Agatha for twenty years, and I’m 37 now, so I’ve always been me. The main reason I came, was to try to help do something to alleviate this senseless suffering.”

“Yes, people seem to keep a distance when they see me, but that is probably as much because of the war and them keeping to themselves as it is about how I look or who I am. Working with people here, Ukrainian or otherwise, has never been a problem.”

As they prepared to depart, I asked the four members what came next. Luhowy was succinct.

“Who knows? We’re all just here to help Ukraine.”

Gay music teacher was blackmailed. Instead of helping him, his school forced him to resign.