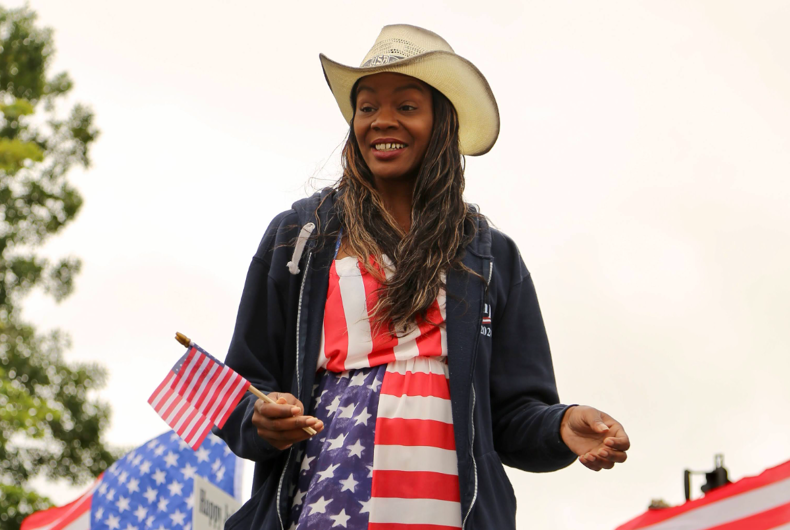 A GOP candidate has taken fear mongering to new heights, claiming that schools are teaching five-year-old children to have oral sex.

“I don’t think it’s nice when they’re telling your five-year-old that he can [perform oral sex on] another five-year-old,” Republican Massachusetts secretary of state candidate Rayla Campbell said at the state’s GOP convention last week. “Do you?”

Republicans this year have been claiming that schools are showing explicit sexual material to young children and teaching them age-inappropriate sex education as they argue that certain books should be banned from libraries and that LGBTQ people should not be mentioned in schools.

And their claims have come with more and more outlandish stories.

“Because that’s what’s happening in your schools!” Campbell said. “If this makes you uncomfortable, it should.”

The Boston Globe tried to get her to provide any evidence that five-year-olds are being taught about oral sex, but she refused.

Instead, she pointed reporters to a bill about sex education currently being debated by the state legislature that calls for “medically accurate, age-appropriate” sex educations programs in schools, including information about sexual orientation and gender identity.

If elected, Campbell would be in charge of running elections in the state. At the convention, she criticized Republicans, who she said “watched our elections be stolen,” a reference to the rightwing conspiracy theory that President Joe Biden stole millions of votes in multiple states without leaving any evidence in order to become president.

“We are going to crush and destroy these rotten devils that call themselves Democrats!” she said, not trying to even seem like she would use the office of secretary of state in a way that’s fair. “This is a battle of good versus evil.”

He said he thought her words were “certainly nothing that we would be discussing, the way we conduct ourselves in office.”

“I think we’ll leave that what it is,” he said.

But his criticism of Campbell apparently only went as far as how she expressed herself. Diehl went on to criticize “critical race theory” being taught in schools, and he even claimed that his 14-year-old daughter was forced to sign a pledge acknowledging her white privilege.

The superintendent of the daughter’s school district has said that no such pledge exists.

Louis Gohmert is leaving Congress. His replacement won’t be any better