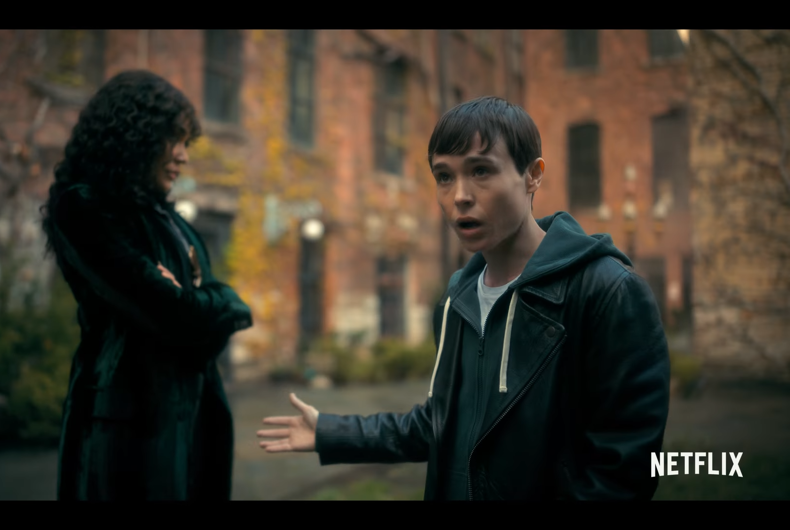 Netflix just released the trailer for The Umbrella Academy Season 3 and it is burning up social media.

Even better, we get our first real look at Elliot Page’s transformation from Vanya to Viktor in what insiders say is a really beautiful storyline with Viktor coming out to his superhero adopted siblings.

And while we’re looking at Viktor, let’s take a good look. Page isn’t just easy on the eyes, it’s obvious that he’s more comfortable in his own skin and Viktor’s.  After all, if you’re gonna save the world, you should be able to save yourself – and Page has obviously done both.

Page transitioned between the show’s second and third seasons. It was originally thought that his character — Vanya Hargreeves, a violinist with a destructive power to control sound waves — would continue to be portrayed as a cisgender woman. However, Page revealed that his character will be male earlier this year.

“Meet Viktor Hargreeves,” Page wrote in a March 29 tweet that included a purple umbrella emoji and an image of his character. In response, Netflix’s official Twitter account re-tweeted Page’s message and wrote, “Welcome to the family, Viktor — we’re so happy to have you here” with a heart emoji.

“After putting a stop to 1963’s doomsday, the Umbrella Academy return home to the present, convinced they prevented the initial apocalypse and fixed this godforsaken timeline once and for all. But after a brief moment of celebration, they realize things aren’t exactly (okay, not at all) how they left them,” Netflix teases. “Enter the Sparrow Academy. Smart, stylish, and about as warm as a sea of icebergs, the Sparrows immediately clash with the Umbrellas in a violent face-off that turns out to be the least of everyone’s concerns.”

“Navigating challenges, losses, and surprises of their own – and dealing with an unidentified destructive entity wreaking havoc in the Universe (something they may have caused) — now all they need to do is convince Dad’s new and possibly better family to help them put right what their arrival made wrong. Will they find a way back to their pre-apocalyptic lives? Or is this new world about to reveal more than just a hiccup in the timeline?”

The show returns on June 22.