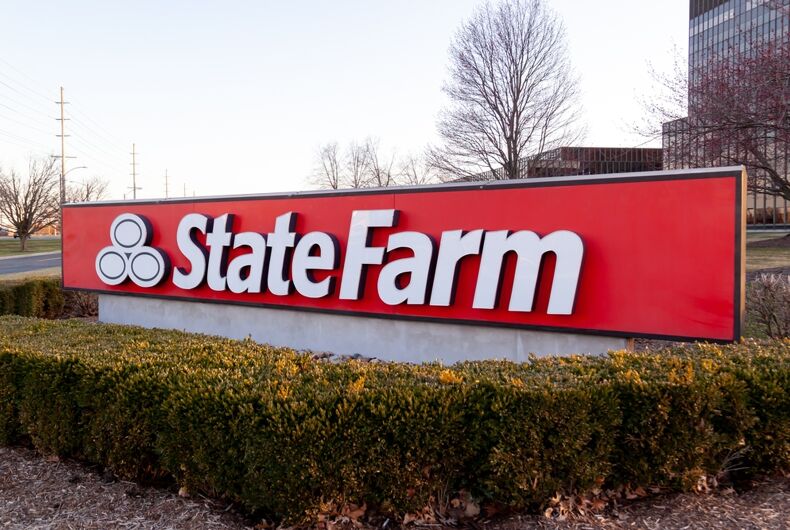 State Farm, the insurance company, was going to partner with the GenderCool Project to help give LGBTQ books to schools, community center, and libraries. But in an email to employees, the insurance company canceled the partnership, saying that “conversations about gender and identity should happen at home with parents,” echoing language used to support Don’t Say Gay bills.

In January, State Farm emailed employees about the small partnership, which was going to involve six agents in Florida giving some books to organizations in their community, part of a nationwide program involving 550 employees.

“The project’s goal is to increase representation of LGBTQ+ books and support our communities in having challenging, important and empowering conversations with children Age 5+,” the email read. “This is a fantastic way to give back and an easy project that will help support the LGBTQ+ community and to make the world around us better.”

The email did not give any reason to assume that the books would not be age-appropriate. The three books that were going to be donated are being sold by the GenderCool Project and are labeled as appropriate for ages five and up.

One of the books is entitled A Kids Book about Being Inclusive. Its online description says: “Being inclusive is a choice we can make every day! Being inclusive means reaching out to and welcoming all people and everything that makes them who they are. When we learn to see the beauty in our differences, we can embrace the rich, diverse, and amazing world we live in together!”

The anodyne nature of the books didn’t stop the well-connected anti-LGBTQ activist Chaya Raichik of the notoriously hateful Libs of TikTok account from saying that State Farm “is working to fill schools with books on kids becoming trans and non-binary,” leading to an outcry against State Farm.

Now State Farm has pulled out of the partnership. In another email to employees, Chief Diversity Officer Victor Terry said that the partnership with the GenderCool Project is over.

“Conversations about gender and identity should happen at home with parents,” the email from the diversity officer read. “We don’t support required curriculum in schools on this topic. We support organizations providing resources for parents to have these conversations.”

“State Farm pulled the plug because they got scared and decided it’s more important to placate anti-LGBTQ extremists than stand beside the LGBTQ community in a moment of horrific uncertainty,” said LGBTQ advocate Charlotte Clymer on her Substack, noting that most of State Farm’s political contributions are to Republicans and conservatives.

In the past several months, conservatives have been outraged that LGBTQ issues may get discussed in schools, leading Florida to pass a Don’t Say Gay law and several other states to try.

Florida Gov. Ron DeSantis’s (R) press secretary said that anyone who opposes the law is a pedophile, a charge that many conservatives have made about LGBTQ teachers and even the Trevor Project, which runs a crisis hotline for LGBTQ youth.

Anti-LGBTQ activists like Raichik argue that only parents should be able to discuss LGBTQ issues with minors. Supporters of LGBTQ people have said that schools can and should be a place for LGBTQ students to be themselves, even if they don’t feel safe doing so at home.

LGBTQ Nation asked State Farm for comment on this story. It will be updated if the company responds.