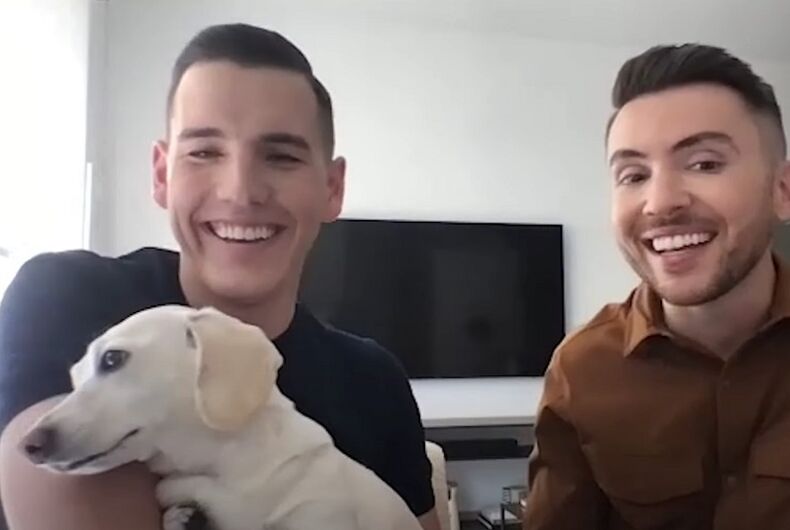 In a March 16 Twitter post, Pushaw reposted an image of a fake Washington Post story with the headline, “This dog is the new face of online homophobia.” The story’s byline listed journalist Taylor Lorenz, the reporter who got national attention for her story last month about the anti-LGBTQ activist Chaya Raichik and her “Libs of TikTok” account.

The article’s description on the image read, “Internet trolls have turned a dachshund into a viral homophobic meme — and her gay owners don’t know what to do.”

Pushaw’s comment about “sliding into the DMs of tiktok teenagers” likely refers to the fact that Lorenz has previously talked about sending direct messages teens on social media as part of her cultural reporting.

To be clear, Lorenz hasn’t actually written a story about Whitney Chewston, a gay couple’s dog whose image has since turned into a meme. Web users have written anti-LGBTQ statements upon images of the dog as a way to mock people who share bigoted opinions as matter-of-fact statements.

In fact, Lorenz thought that it was funny that Pushaw was fooled by the false story.

Pushaw likely reposted the story as a way to rail against Lorenz and left-wing activists who call out others who make anti-LGBTQ statements. Pushaw has previously spoken against progressive activists who support LGBTQ-inclusive education and school lessons about institutionalized racism.

Pushaw has previously defended her state’s “Don’t Say Gay” law by stating that anyone who opposes it must be a pedophilic groomer seeking to sexually abuse children. Throughout the COVID-19 pandemic, she repeatedly pushed the lie that no studies have shown that face masks reduce the transmission of respiratory viruses.

According to KnowYourMeme, in March 2021 iFunny users posted the image of the dog with the words “not too fond of gay people” on top of it. Within the next few months, the meme went viral on Reddit, Instagram, and other social media platforms. Since then, people have added other anti-LGBTQ statements on the dog, like, “It’s a choice,” “Not homophobic just don’t agree with the lifestyle”, and “The pearly gates won’t open for your kind.”

Logan Hickman, one of Whitney’s owners, said in a March 2022 video, “She’s not homophobic in real life! Her dads are gay. It’s interesting, almost ironic, her voice on Instagram has always been kind of sassy and a little gay, so it’s very ironic that she’s branded as homophobic.”