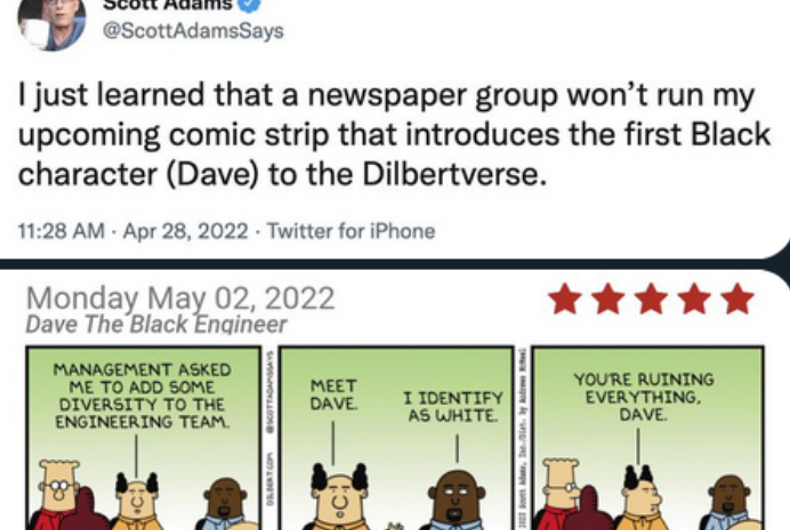 Scott Adams said that he will be canceled for his comic strip Photo: Screenshot

Scott Adams, the creator of the long-running Dilbert comic strip, tried to make a joke at transgender people’s expense. But he failed spectacularly.

“Let’s see if the world is ready for this,” Adams wrote in a tweet about his comic on May 2.

The comic shows the manager introducing new coworker Dave to Dilbert and the rest of the crew. Dave is drawn to indicate that he’s Black, making him the first Black character in the comic that debuted in 1989.

“I identify as white,” Dave responds, a “joke” that readers interpreted as mocking transgender people’s identities. Adams denied the insinuation but didn’t providing another explanation of what his joke was intended to be.

“Dave will be featured all week, so if this one doesn’t get me cancelled, more chances to come,” Adams said, even though it was clear that his comic strip was not going to get canceled.

Dave will be featured all week, so if this one doesn't get me cancelled, more chances to come.

Except… his joke didn’t quite land. Adams apparently didn’t realize that most newspapers don’t print weekday comic strips in color. So the people who actually saw Dilbert in a newspaper on May 2 probably didn’t understand what Adams was trying to say.

This is apparently the first "Black" Dilbert character introduced since the strip's inception in 1989. I mean, it's set in an office in the present day, so you know… just never came up, I guess.

Comic strip artists will often using shading to indicate differences in color instead of relying on actual colors for weekday strips, but Adams is apparently not that kind of artist.

He, instead, spent the rest of the week demanding to know if he has been “cancelled yet.”

He also accused gay people of wanting to “touch our kids” while responding to out Secretary of Transportation Pete Buttigieg’s response to Florida’s Don’t Say Gay law.

He's good at this. But the other frame for understanding what we are observing is "Don't touch our kids." https://t.co/mtqj3TXNLJ