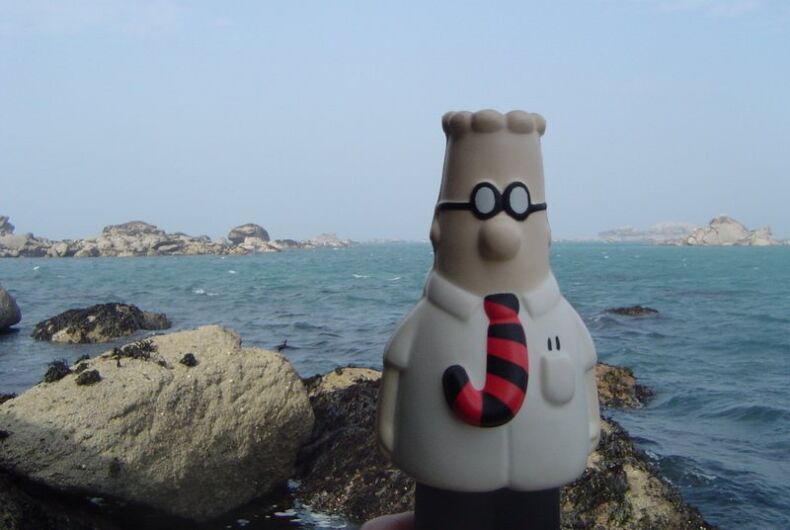 The cartoonist, whose comic strip gained popularity for its depictions of life working in a cubicle, was an off-and-on supporter of Donald Trump and has frequently criticized feminists and women in generally for making men feel emasculated. In a blog post that begins by criticizing characterizations of the president as Hitler-like, he called out the college for not preventing the violent protests against Yiannopoulos.

“Speaking of Hitler, I’m ending my support of UC Berkeley, where I got my MBA years ago,” he wrote. “I have been a big supporter lately, with both my time and money, but that ends today. I wish them well, but I wouldn’t feel safe or welcome on the campus.”

Adams seemed to identify himself with the Breitbart writer. Both men have taken pride in sharing unpopular and “un-PC” views and have praised President Trump.

“I’ve decided to side with the Jewish gay immigrant who has an African-American boyfriend, not the hypnotized zombie-boys in black masks who were clubbing people who hold different points of view,” Adams wrote in a blog post. “I feel that’s reasonable, but I know many will disagree, and possibly try to club me to death if I walk on campus.”

Adams appears to have recurring concerns about his safety. During the presidential election, he switched his “endorsement” a number of times, at one point claiming to endorse Hillary Clinton only for his personal safety:

Some of you watched with amusement as I endorsed Hillary Clinton for my personal safety. What you might not know is that I was completely serious. I was getting a lot of direct and indirect death threats for writing about Trump’s powers of persuasion, and I made all of that go away by endorsing Clinton. People don’t care why I am on their side. They only care that I am….If you didn’t believe me that I endorsed Clinton for my safety, perhaps the recent shooting of police officers changed your mind. That’s the sort of tragedy you expect to happen when Team Clinton frames the national debate as a race war.

Though Adams has said that he does not belong to a political party, or vote, he has been outspoken about politics.