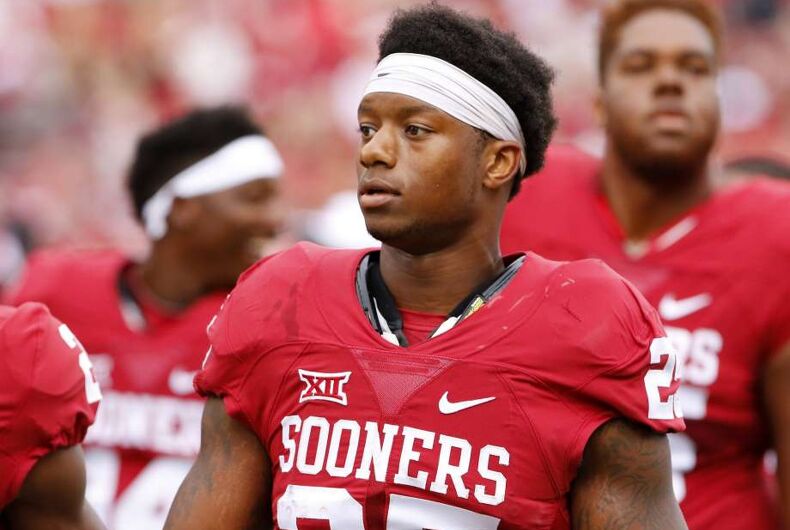 Former Oklahoma running back and NFL draft hopeful Joe Mixon punched a woman in the face in 2014, and a video of the victim’s interview with police at the time has just come out.

Amelia Molitor explained that the incident began as a result of Mixon and his friends making unwanted sexual advances towards her while she stood outside a restaurant smoking. She then went back inside the restaurant, followed by Mixon.

In surveillance video released last month, taken from inside the restaurant, Mixon can be seen following Molitor back inside. He can then be seen speaking to her and her male friend.

At one point, Molitor shoves Mixon, who then lunges at her. She then slaps his face and he punches her with a right hook that causes her to fly backward into the table, breaking bones in her face and causing her to lose consciousness.

He was charged with a misdemeanor and suspended for the 2014 season by the Sooners. Upon his return, he helped lead the team to back-to-back Big 12 titles and declared himself eligible for the NFL draft last month.

You can see the violence as it occurred in the video below, but be warned that it is not easy to watch.

Mixon apologized after the video came to light, making his first public comments since the incident.

“It’s never, never OK to retaliate and hit a woman the way I did,” he said. “I’m here to apologize to everybody that was affected.”

A month earlier, he issued a written apology, where he claimed “drunk people started harassing” him and that “racial slurs” initiated the incident.

Molitor’s version of events is quite different, as can be seen in her interview with police, reports ESPN.

She said she was smoking a cigarette outside of Pickleman’s sandwich shop near campus, waiting for her friend to finish using the bathroom inside, when Mixon and his friends came by and began harassing her.

“They were like making catcalls at me, commenting on how I looked,” she told Norman Police Detective David Freudiger. “They were talking about Joe, I suppose — I didn’t know who he was — like, ‘It’s my boy’s birthday, like, what are you going to do for him?’ Suggesting I go home with him, making very specific suggestions about what I could do to pleasure him.”

She said that at first she laughed it off, but got mad after Mixon used a gay slur against her friend.

Molitor said she and her friend went inside the restaurant out of fear that she “felt like they actually would harm us.”

She also said she never called Mixon a racial slur and is hurt by being characterized as a racist.

In Mixon’s interview with police, he claimed Molitor’s friend was the one who directed a racial slur against him, and said Molitor was acting crazy and blowing smoke in his face.

Freudiger told Molitor that her version was in “direct conflict with 10 or 12 written statements that I have about what happened.”

“I can tell you six people out on that sidewalk at least want me to believe that this all started over cigarette smoke. And that they were perfect angels about it and very politely tried to correct the situation where they were around some secondhand smoke, and none of this other stuff.”

Freudiger said in his opinion, however, Molitor’s “explanation of what happened” seemed “much more reasonable.”

“Almost everyone says that you did not use a racial slur,” he also added.

“I wouldn’t have remembered if I did, but I know in my heart that I would not have done that, no matter how angry I was,” Molitor said. “That’s just not something that I would ever do…The color of skin had absolutely nothing to do with what was going on.”