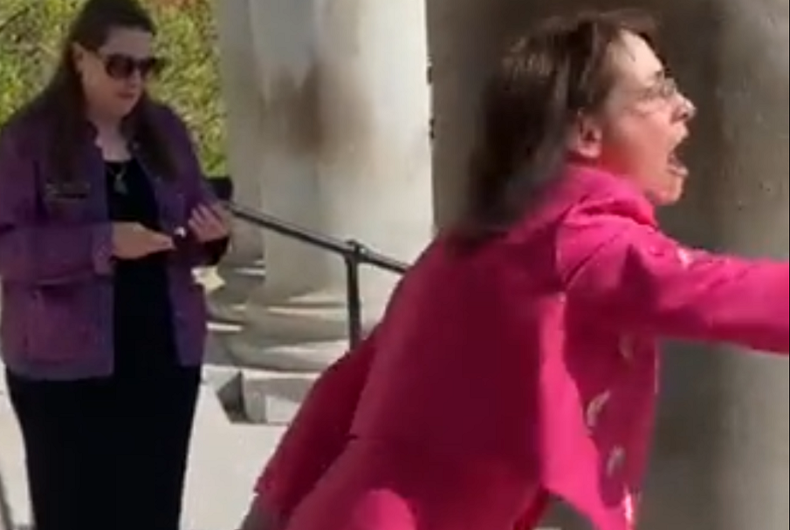 A state lawmaker in New Hampshire has gone viral for losing it calling reproductive freedom protestors “murderers” and even called herself a murderer as people protested for abortion rights.

State Rep. Susan DeLemus (R) confronted protestors in from of the New Hampshire House on Thursday to protest the leaked draft of the majority opinion in Dobbs v. Jackson Women’s Health Organization, which showed that the Supreme Court has voted to overturn Roe v. Wade and end the right to an abortion in the U.S.

“Shame on you! Shame on you!” DeLemus shouted at the protestors, completely losing her cool. “Shame on all of you, shame on you for killing babies!”

Nothing quite like the tact and grace of an @NHGOP State Rep on the steps of the people's house. Say hello to @SusanDeLemus engaging peaceful protestors this morning. #NHPolitics pic.twitter.com/dtEW7o6dsL

DeLemus had an abortion decades ago and has made her regret about that decision central to her politics.

In 2012, she told a Senate committee that she “murdered my baby.”

New Hampshire’s legislature is currently debating a bill to require women to wait 24 hours before getting an abortion, and DeLemus said that she might have changed her mind if forced to wait a day.

DeLemus told the Foster’s Daily Democrat that her meltdown was a reaction to protestors saying “Shame on you” to her.

“Anyone who’s had an abortion, or anyone who supports abortion in my eyes, is a murderer or is pro abortion, pro death, pro ending the life of a baby,” she said.

State Rep. Chuck Grassie (D), who represents the city of Rochester with DeLemus, called her “an embarrassment.”

“It’s an embarrassment to Rochester,” he said. “She has no concern about the decorum and how a state representative should act. No matter how you feel you should respect people’s free speech rights. If this goes viral nationally, all people will see is she’s a representative from Rochester. If we want to grow our community and image, that isn’t the kind of news or image we want to project.”